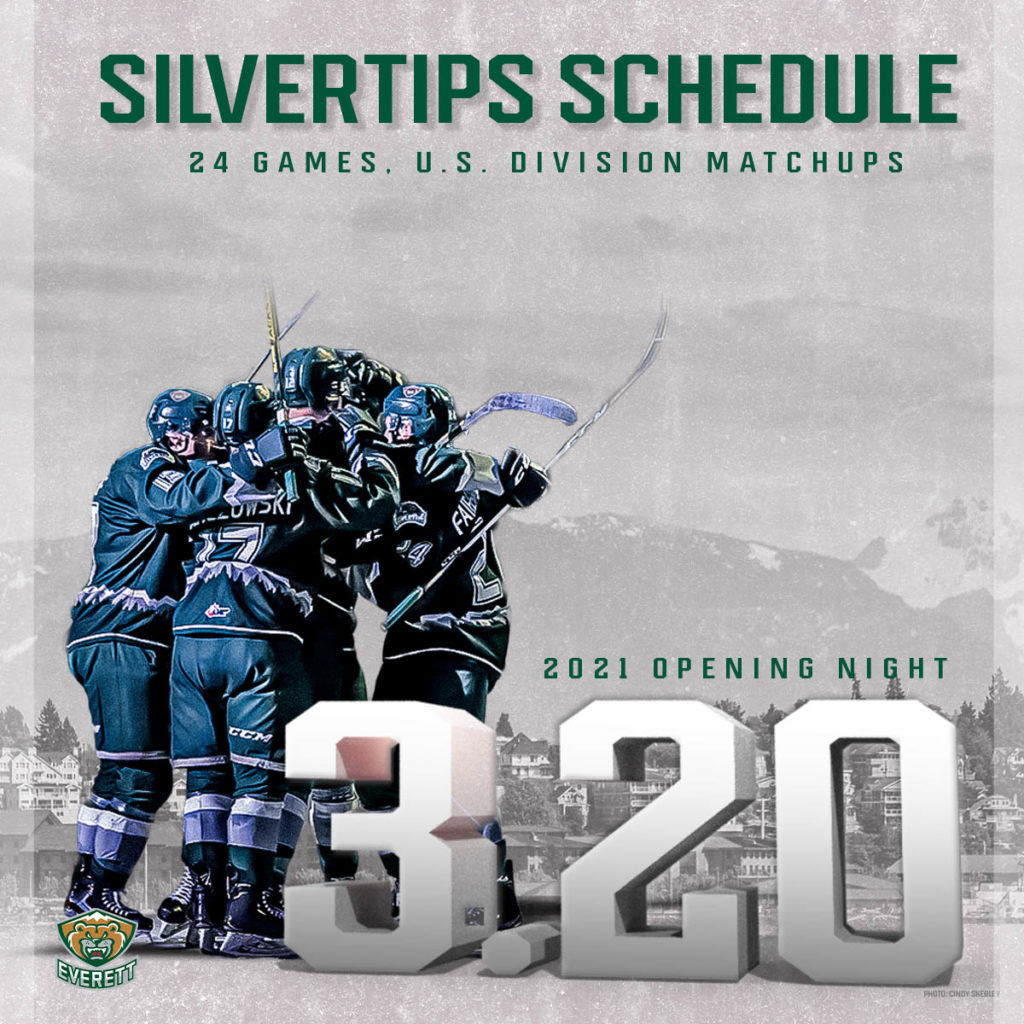 EVERETT, WA – The Everett Silvertips, seven-time U.S. Division champion and two-time Western Conference champion of the Western Hockey League, announced in conjunction with the WHL their 24-game regular season schedule for the 2020-21 season, with the Silvertips facing an exclusive lineup of U.S. Division opponents during a shortened season.

The Silvertips will launch their 2020-21 season on Saturday, Mar. 20 at 6:05 p.m. against the Spokane Chiefs at Angel of the Winds Arena. It’s the first of six meetings against the Chiefs (3 home, 3 road), joining a slate against the Seattle Thunderbirds, Portland Winterhawks, and Tri-City Americans.

The Silvertips will also close the season on Saturday, Mar. 8 on the road against their closest geographic rival, the  Thunderbirds at 6:05 p.m. The two teams, who last met in a Silvertips 3-2 win in Kent on Mar. 8, 2020 before the pandemic-concluded 2019-20 season, before will face off seven times during the regular season (3 at A.O.T.W. Arena, 4 at accesso ShoWare Center) and first square off Wednesday, Mar. 31 in Kent at 6:05 p.m.

The Tips will conclude the 2020-21 regular season on Saturday, May 8 against the host Thunderbirds at 6:05 p.m.

The season schedule features 16 games on Fridays, Saturdays, and Sundays, spread from March through May. All Silvertips home games at Angel of the Winds Arena will begin at the following times:

All Silvertips games will be streamed through WHL Live, available for full season subscriptions at watch.chl.ca and Opening Night streamed against Spokane on Mar. 20 offered free-of-charge. Silvertips play-by-play voice Mike Benton will return for his sixth season behind the mic for all home and away coverage, with further broadcast details expected to be announced soon.

The WHL has developed an extensive set of protocols, to not only provide a safe environment for players and staff, but to protect individuals in the community. The WHL will implement an ongoing weekly private antigen testing strategy. Enhanced screening for all WHL players, billets, team staff and officials will take place on a daily basis, including regular temperature screenings as well as symptom monitoring through the WHL Athlete RMS Mobile Application. When participating in games and practices, WHL players must wear gaiter-style masks while on the bench. WHL Officials will be required to wear gaiter masks when on the ice. WHL coaches and other team personnel will be required to wear masks at all times, including while conducting practice and while behind the bench during games.

As the WHL returns to play in Washington State, due to local health circumstances caused the coronavirus pandemic, no spectators will be permitted to enter WHL facilities until further notice.