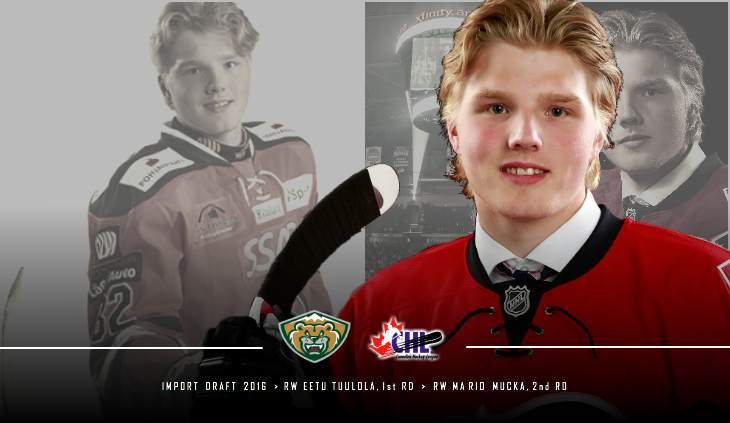 “We went into the Import Draft aiming for candidates who could address urgent needs on our club and we’re excited with the opportunity to select a pair of prospects in Eetu and Mario,” said Davidson. “Watching Eetu’s game in under-17 and under-18 events clarifies his development into a bonafide CHL Import pick and NHL Entry Draft pick as a big power forward with a heavy shot. Mario is a highly-recommended forward who brings a reputation as a player with good stick work and a legitimate skill set.”

Tuulola, 18, was additionally selected by the Calgary Flames in the sixth round (156th overall) in the 2016 National Hockey League Entry Draft. The native of Hämeenlinna, Finland was ranked 19th by NHL Central Scouting among skaters (European) entering this year’s draft, and participated in the NHL Scouting Combine in Buffalo.

The 6-foot-3, 227-pound forward skated for HPK U20 in the Jr. A SM-liiga league last season, earning nine goals and 14 points (9g-5a) in 29 games. In 62 career games with the league, Tuulola has posted 42 points (30g-12a) and 30 goals along with a +9 rating. He suited up for Finland at the U18 World Junior Championship, helping guide the program to a gold medal with four points in seven games of competition.

Tuulola also represented Finland’s Under-18 squad at the Ivan Hlinka Memorial Tournament, earning four points (2g-2a) in five games. His father, Marko, was a defenseman for 25 seasons in the Finnish Elite League, the Swedish Hockey League, and Switzerland’s National League A, additionally representing Finland at the 2001-02 World Championship. Eetu’s brother, Joni, is a 20-year old defenseman in Finland and was selected by the Chicago Blackhawks in the sixth round of the 2015 NHL Entry Draft.