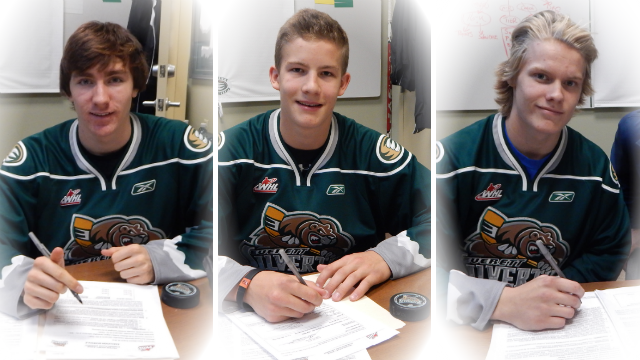 Dewar (DEW-ur) and Sutter are both 1999-born forwards and Silvertips selections from the 2014 WHL Bantam Draft. Mallonee (MAL-uh-nee), a native of Kennewick, Wash. and product of the Junior Silvertips Under-16 program, is a 1998-born forward previously skating with the WHL club as a training camp invitee.

“We’re excited to add three forwards who took huge steps in their development and add great elements to our lineup,” said Davidson. “Connor brings a relentless approach, is very exciting to watch, plays a complete game at high speed and with a large amount of skill. Riley brings a hard-nosed approach with size, a tribute to much of his family who have passed through the WHL and NHL. Sean’s passion for the game and fearless approach for his size are great compliments to our roster; he has the desire to play in the WHL and is a testimony to hard work and the opportunities offered in our Under-16 program.”

Dewar, 16, was selected by Everett in the fifth round (107th overall) of the 2014 Draft and played last season with the Parkland Rangers (MMHL), ranking fourth in scoring with 37 points (15g-22a) in 43 games while tying for fifth in power play goals (4). He was the recipient of the Thompson Minor Hockey Association’s Munn Cup Most Valuable Player Award, also awarded in 1980 to Theoren Fleury.

Sutter, a native of Calgary who turns 16 on Oct. 25, was selected by the Silvertips in the sixth round (125th overall) of the 2014 Draft and spent 36 games last season with the minor midget AAA Rangers of the Calgary Buffalo Hockey Association, ranking third in points (50), fourth in assists (28) and tied for second in goals (22). The 6-foot-2, 185-pound forward added an assist in five games at the AAA midget level with the Calgary Buffaloes.

Mallonee, 17, was born in Kennewick and suited up last season with the Everett Junior Silvertips Under-16 program, ranking second in scoring with 17 points (5g-12a) in 19 games while leading the club with 12 assists. The 5-foot-10, 180 pound forward was selected to play in last season’s Under-16 All-Star Game in the North American Prospects Hockey League.