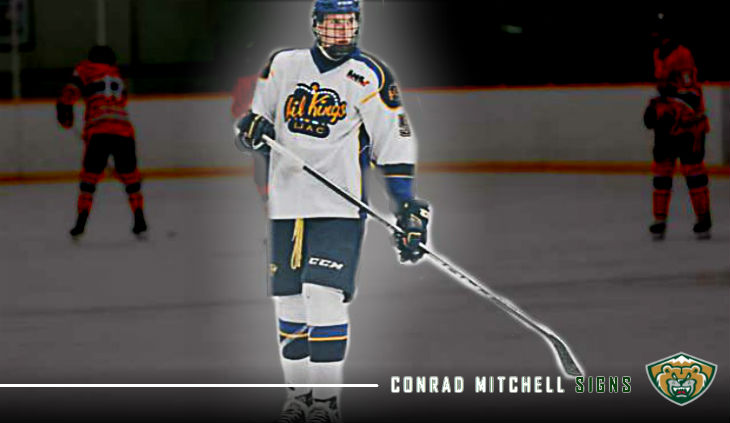 Mitchell, a 2001-born forward, is the third member of the Silvertips 2016 draft class to sign with the franchise, joining forward Ethan Browne (1st round, 14th overall) and goaltender Dustin Wolf (5th round, 104th overall).

“Conrad Mitchell has taken terrific strides this season with the LeDuc Oil Kings program,” said Davidson. “He brings a variety of impressive tools associated with his game and his size delivers an imposing presence which caught our attention in training camp. We’re excited about Conrad’s future and his commitment to the Silvertips family and welcome him to Everett and the Western Hockey League.”

“Conrad’s size is an obvious advantage and he is a big kid who demands room but can convert chances, create his own, is still growing, and is an individual whom we’re confident can be a great fit for our mold,” said Silvertips director of player personnel Bil LaForge. “He plays the game hard with skill, finishes checks, skates well for a big guy, and carries the best shot I’ve seen at his level for a while. His development curve is tremendous.”

Mitchell, a 6-foot-5 and 192 pound forward with the LeDuc Oil Kings (AMMHL), was third in points (35), goals (17), and led the league in penalty minutes (136) in just 35 games this season. He skated with the Silvertips in training camp during the preseason and last season was fifth on LeDuc (AMBHL) in scoring with 24 points in 36 games.

Mitchell, as the tallest and fourth heaviest player in his league last season, skated in Hockey Alberta’s top 80 Summer Camp in Camrose, Alberta last July. He was selected by the Silvertips in the seventh round (139th overall) of the 2016 WHL Bantam Draft.

The Silvertips, one point back of the U.S. Division lead with four games to play, visit the Kelowna Rockets on Wednesday at 7:05 p.m. (1380 AM / 95.3 FM / Tips App). Ticket specials are available at www.everettsilvertips.com/ticketpromos