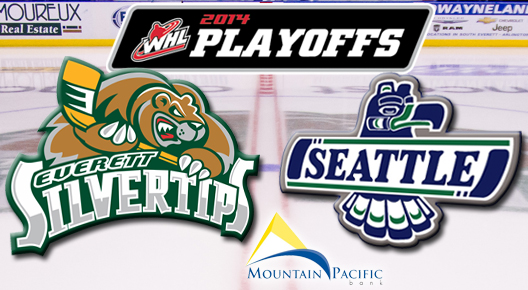 EVERETT – After finishing the 2013-14 WHL regular season with the #5 seed in the Western Conference, the Everett Silvertips will clash with the fourth-place Seattle Thunderbirds in a best-of-seven first round WHL playoff series.  After meeting 112 times over the last 11 regular seasons, the two Puget Sound rivals will write a new chapter in their shared history with their first-ever playoff matchup.  The ‘Tips and T-Birds split the regular season series with each team winning five games against the other for the fourth consecutive season.

By virtue of finishing fourth in the Western Conference, the Thunderbirds hold home ice advantage in the series over the fifth-seeded Silvertips.  The proximity between the two clubs allows for a non-traditional series format that finds the teams alternating home games, with Seattle hosting the odd-numbered games and Everett at home for the even-numbered games:

Silvertips playoff ticket packages are available now, while single-game playoff tickets go on sale Monday morning at 10:00 am at the Silvertips office, online by CLICKING HERE and by phone at (866) 332-8499.  The team office is open weekdays from 8:30 am to 5:00 pm.  Single game tickets will also be available from the Comcast Arena box office when it opens Monday at noon.