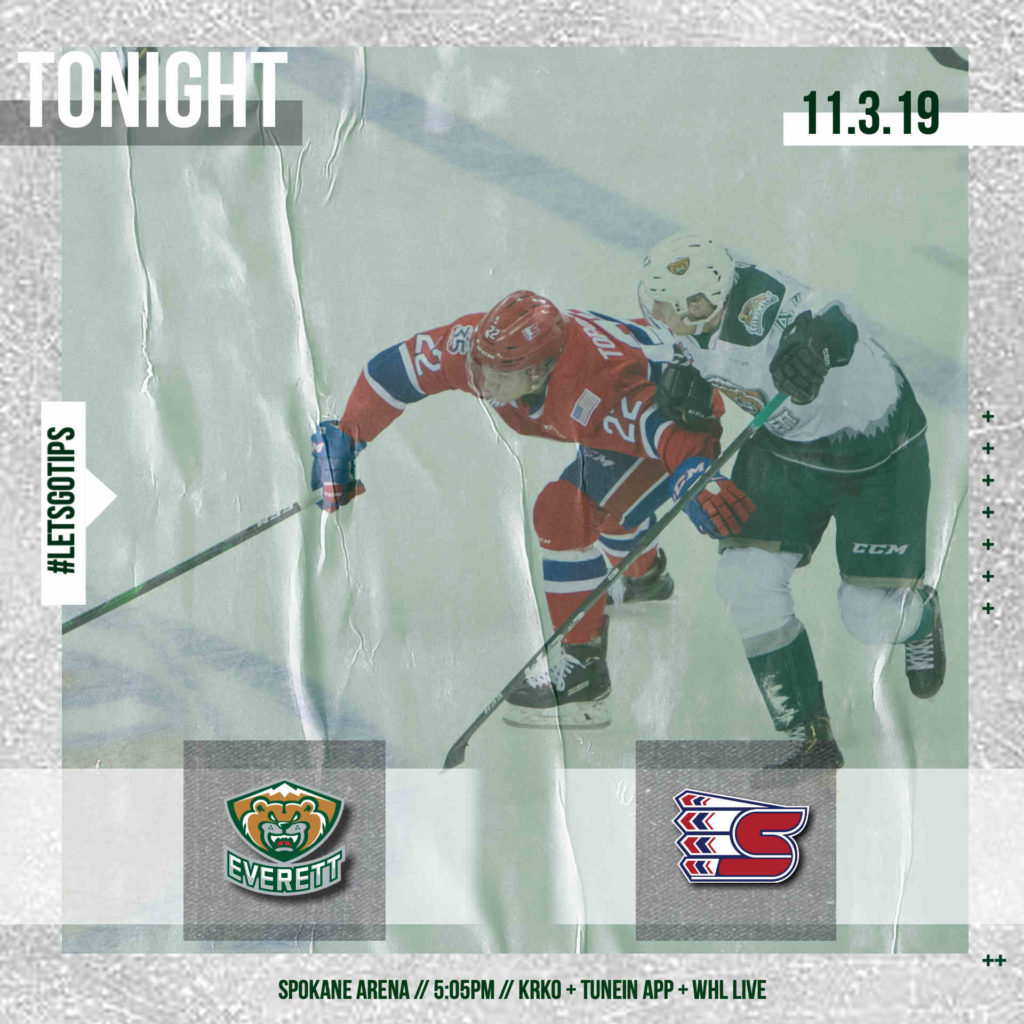 Second of nine meetings this season … the Silvertips are entering the third game of a stretch, playing within three days… the Tips have an all-time record of 71-58-1-8-4 all-time vs. Spokane and are 7-0-0-1 in the last eight regular season meetings in Spokane … the Tips will take four days off after Sunday’s game, and meet again in Spokane for the next matchup this Friday … the Tips are 7-0-0-1 in the last eight regular season visits to Spokane.

EVT 3 – KAM 2 (11-2-19): Dustin Wolf made 42 saves, including 17 in the final period while Justyn Gurney’s goal stood as the game winner to lift the Everett Silvertips to a 3-2 victory over the Kamloops Blazers before a crowd of 5,349 at Angel of the Winds Arena in downtown Everett, Saturday in WHL action. The Tips won for the sixth time in seven games and beat Kamloops for the second time in three games. Aside from the Tips never trailing, Wolf also provided an array of highlight reel saves including a sprawling, behind-the-back, glove save on Ryan Hughes in the first period.

DID YOU KNOW?
1) HOWLING GOOD TIME: Tips goaltender Dustin Wolf was named WHL Vaughn Goaltender of the Month on Thursday (second time in his career) … he leads the WHL with a .939 save percentage and is tied for the WHL lead in shutouts (2) this season … his current lifetime save percentage of .935 is #1 in Silvertips all-time history.
2) WILLING TO 100: Silvertips head coach Dennis Williams earned the 100th win in his WHL head coaching career last night, in a 3-2 victory over Kamloops … he was behind the bench this summer for Team Canada, earning a silver medal at the Hlinka Gretzky Cup in Europe … Williams was named WHL Western Conference Coach of the Year in 2017-18.
3) GETTING A GAGE: Last night, Gage Goncalves earned his fourth multi point effort of the season (1g-1a) and second star honors … Goncalves has points in six of the last seven games and is third on the Tips with 13 points.