TEAM CANADA // Olen Zellweger to Compete in U18 World Championships 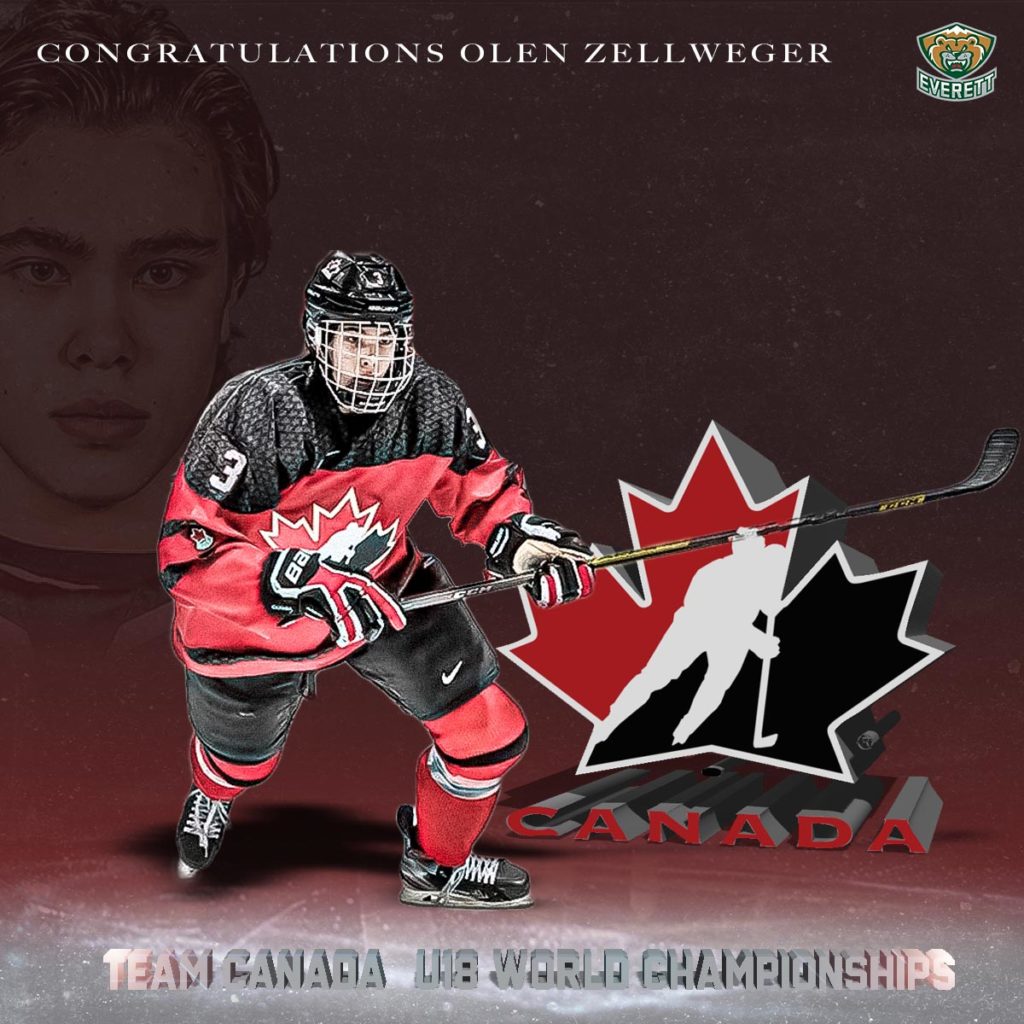 Olen Zellweger Named to Team Canada for IIHF U18 World Championships in Texas, Apr. 26-May 6

EVERETT, Wash. – The Everett Silvertips, two-time Western Conference champions and seven-time U.S. Division champions of the Western Hockey League, announced in conjunction with Hockey Canada that defenseman Olen Zellweger has been named to Canada’s roster for the upcoming IIHF U18 World Championships in Frisco and Plano, Texas from April 26 – May 6.

It will be Zellweger’s second opportunity to suit up for Team Canada after competing in the U17 World Hockey Challenge in the 2019-20 season, and he will be one of 25 players selected to complete for Canada’s program and pursue a fourth gold medal at the event. Canada will be led behind the bench by head coach Dave Barr (Toronto, Ont.), along with Gordie Dwyer (Dalhousie, N.B.) and Mike Stothers (Toronto, Ont.) who will serve as assistant coaches.

“We’re extremely proud as an organization of this latest accomplishment for Olen Zellweger, a terrific selection for Team Canada,” said Silvertips general manager Garry Davidson. “His development is a huge credit to our coaching staff, preparing him for this moment, and Olen himself. We’re excited to watch him represent the Silvertips and his country. As an organization, it’s our priority to prepare players for these opportunities. We consider it another feather in our cap today, in our mission to help players who commit to our program, to maximize their potential.”

Zellweger this season is second among Silvertips defensemen with five points (1g-4a) in six games, has a +3 rating and one game winning goal. He was also named among 36 WHL players ranked by NHL Central Scouting, and among 12 defensemen on the list in preparation for the 2021 NHL Entry Draft.  Zellweger registered 12 points (2g-10a) in 58 games last season, along with a +20 rating and 50 shots on net for his first WHL season. The Fort Saskatchewan, Alberta native logged his first career multi point game on Feb. 7 when he earned a pair of assists against Tri-City, and scored his first career WHL goal on Dec. 28 against the Kamloops Blazers.

The native of Fort Saskatchewan, Alberta and 2003-born defenseman was named to Hockey Canada’s U18 Team Selection Camp last June, as part of a group of 46 players who were set to compete for roster spots with Hockey Canada at the 2020 Hlinka Gretzky Cup, originally scheduled for August 3-8 in Edmonton and Red Deer, Alta., before cancellation due to the coronavirus (COVID-19) pandemic.

Zellweger was originally selected by the Silvertips in the second round (42nd overall) in the 2018 WHL Draft. He will continue to compete with the Silvertips until Apr. 12, when he will undergo a mandatory self-isolation period for Team Canada in compliance with COVID-19 protocol.

UP NEXT: The Silvertips and Thunderbirds meet in a rematch on Friday, 7:05 p.m. (KRKO/WHL Live) in downtown Everett. Viewing packages remain on sale at watch.chl.ca. Play-by-play “Voice of the Tips” Mike Benton and color analyst Justin Morrison will have pre-game coverage beginning at 6:30 p.m.