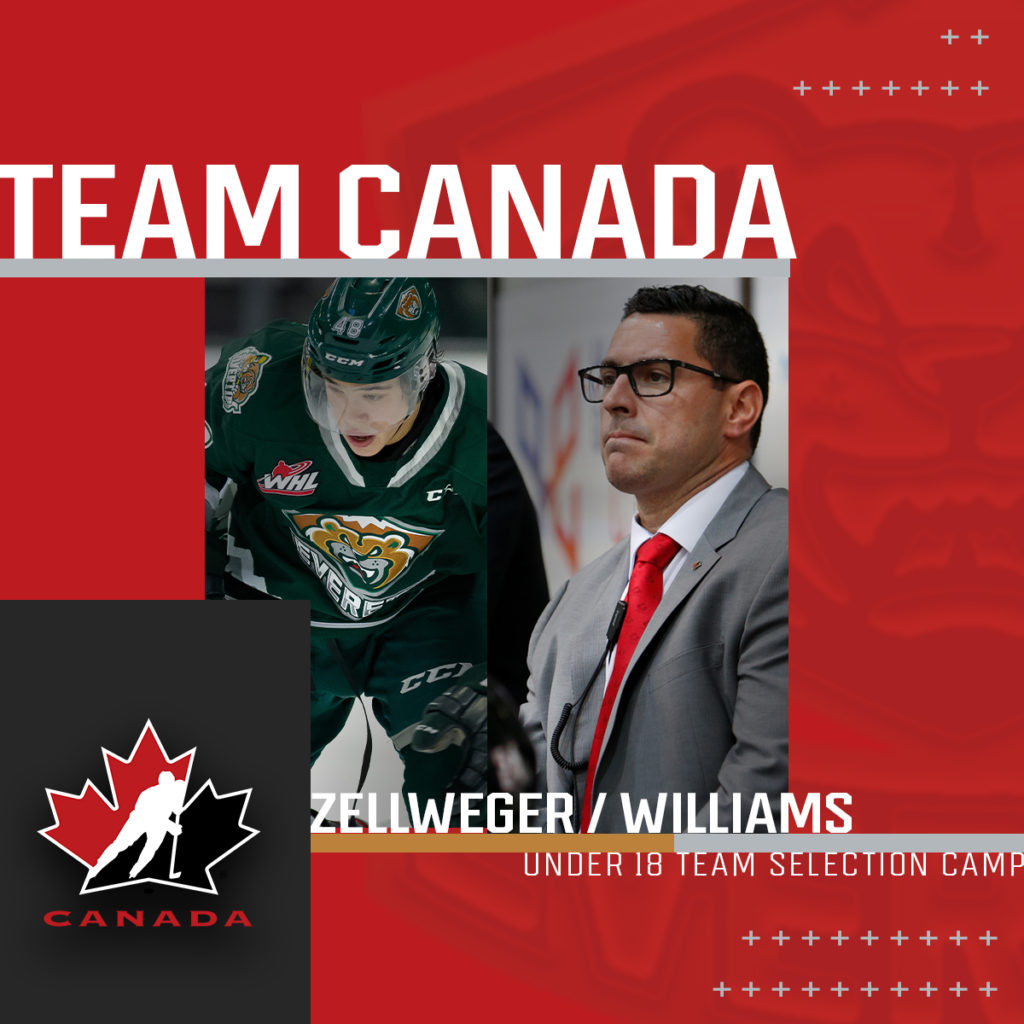 EVERETT, WA – The Everett Silvertips, proud seven-time U.S. Division champion and two time Western Conference champion of the Western Hockey League, announced today in conjunction with Hockey Canada that defenseman Olen Zellweger has been named to Team Canada’s Under-18 Team selection camp, as part of a group of 46 players who were set to compete for roster spots with Hockey Canada at the 2020 Hlinka Gretzky Cup, scheduled for August 3-8 in Edmonton and Red Deer, Alta., before it was cancelled April 28 due to the coronavirus (COVID-19) pandemic.

Silvertips head coach Dennis Williams, the 2019-20 WHL Western Conference Coach of the Year, was also recognized as an assistant coach selection for the Hlinka Gretzky Cup with Hockey Canada for the second consecutive year. Adding to his international resume, Williams previous served behind the bench as assistant coach for Team Canada at the 2019 Hlinka Gretzky Cup, and for Team Canada Black at the 2018 U17 World Hockey Challenge.

“It is important for Hockey Canada to recognize the work the players and coaching staff already put in to prepare for the summer and a chance to compete for gold on home ice,” said Scott Salmond, senior vice-president of national teams for Hockey Canada. “It was a difficult decision to cancel the tournament, as it provides the opportunity to showcase the top under-18 players in a best-on-best international showcase. We want to recognize the 46 players and our three coaches for this tremendous accomplishment, and we look forward to watching all players continue to develop as they look ahead to next season and a chance to compete at the IIHF U18 World Championship.”

Zellweger, the 2003-born defenseman, registered 12 points (2g-10a) in 58 games, along with a +20 rating and 50 shots on net for his first WHL season. The Fort Saskatchewan, Alberta native logged his first career multi point game on Feb. 7 when he earned a pair of assists against Tri-City, and scored his first career WHL goal on Dec. 28 against the Kamloops Blazers.

The 5-foot-9, 165-pound blueliner will enter the 2020-21 season as his first year of eligibility for the NHL Entry Draft and last year additionally skated for Team Canada Red at the U17 World Hockey Challenge last season, logging a pair of assists in five tournament games while representing Canada as one of 66 selected as top young players in the nation to compete in the event.

Zellweger was originally selected by the Silvertips in the second round (42nd overall) in the 2018 WHL Draft.

Williams, named Western Conference Coach of the Year for the second time in three seasons, led the Silvertips to second most points in the entire WHL and U.S. Division at a 46-13-3-1 record (96 points), the Silvertips’ third straight season with more than 40 wins and 90 points since Williams was named head coach to begin the 2017-18 season. The Silvertips also accumulated four players who scored 20 goals or more, saw Bryce Kindopp become the first Silvertip to score 40 goals in a season since 2013-14 (Joshua Winquist), and led the entire WHL in power play percentage (27.5) and fewest goals allowed per game (2.2).

The Silvertips also ranked third in the league in goal differential (+86), led the league in road wins (21), and were second in home wins (25).

Wolf was named Canadian Hockey League and WHL Goaltender of the Year, WHL First Team All-Star and Christiansen and Kindopp were named Second Team All-Stars, all in the Western Conference. Silvertips players also earned international competition opportunities with Wolf named to Team USA at the 2020 IIHF World Juniors, and defenseman Zellweger heading to Team Canada Red for the 2019 World U17 Hockey Challenge.

With the cancellation of the Hlinka Gretzky Cup, focus will now turn to the 2021 IIHF U18 World Championship next spring; a host city has not yet been announced. The Czech Republic and Slovakia will host the 2021 Hlinka Gretzky Cup before it returns to Edmonton and Red Deer in 2022. For more information on Hockey Canada, Canada’s National Men’s Summer Under-18 Team and the 2019 Hlinka Gretzky Cup, please visit HockeyCanada.ca, or follow through social media on Facebook, Twitter and Twitter.com/HC_Men.