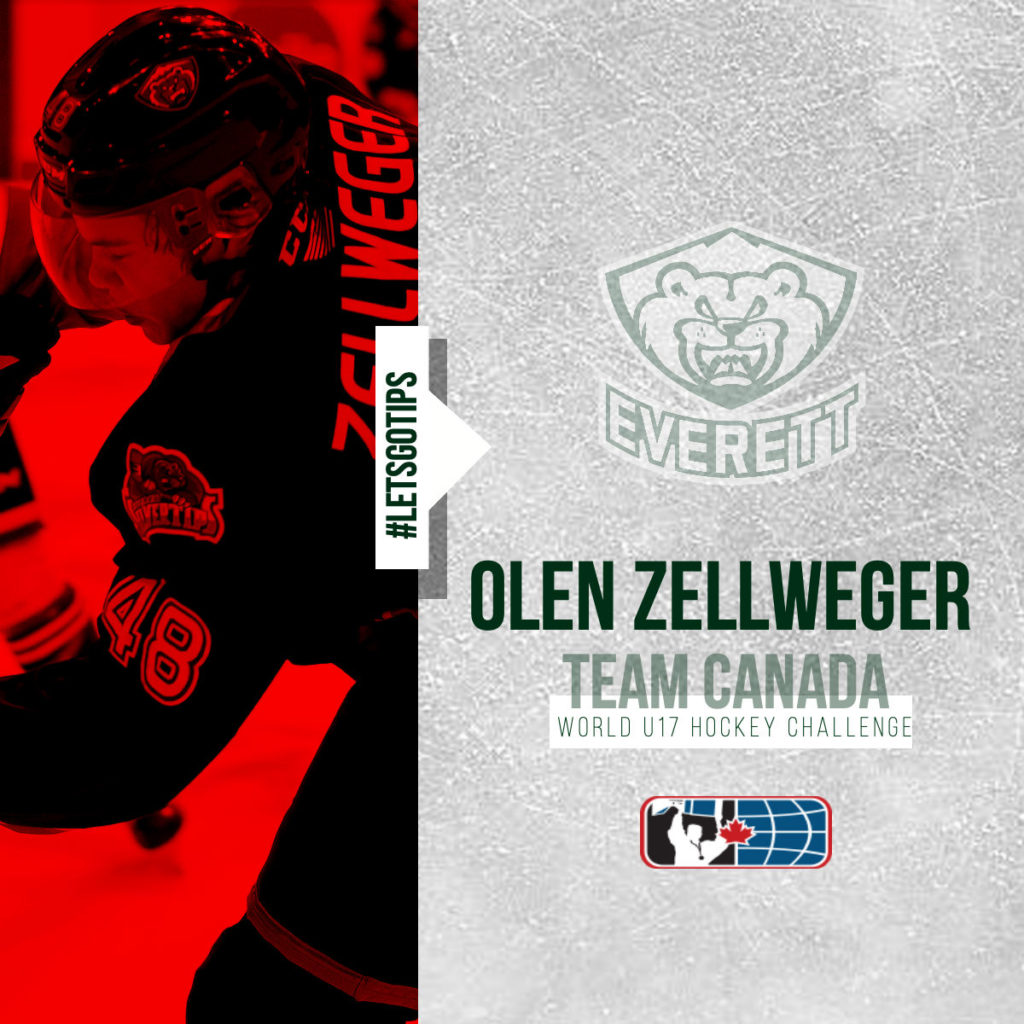 EVERETT, Wash. – The Everett Silvertips (@WHLSilvertips), seven-time U.S. Division champion and two-time Western Conference champion of the Western Hockey League, announced in conjunction with Hockey Canada that defenseman Olen Zellweger (Zell-WAY-gher) has been named to the roster for Team Canada in the upcoming World Under-17 Hockey Challenge, hosting 66 of the top young players in the nation for a seven-day event in Medicine Hat, Alberta and Swift Current, Sask.

Zellweger and the Silvertips continue play tonight, when a five-game homestand continues against the Brandon Wheat Kings, 7:05 p.m. (KRKO / WHL Live) at Angel of the Winds Arena in downtown Everett.

The process began with 112 players invited to participate in Team Canada’s national under-17 development camp in July, and were introduced to Hockey Canada’s Program of Excellence. The 66-player overall roster will be divided into three teams: Team Canada Black, Red, and White, and will compete against the Czech Republic, Finland, Russia, Sweden, and United States in pursuit of a gold medal.

Zellweger, a 2003-born defenseman, has a +4 rating and has fired ten shots on net in his first eight career WHL games as a Silvertip. The Fort Saskatchewan, Alberta native was the Silvertips first selection in the 2018 WHL Draft, coming in the second round (42nd overall) and last season was second among defensemen with 27 points (8g-19a) in 35 games with OHA Edmonton Prep (CSSHL), also leading the program’s blueliners with 19 assists and tied for the lead among defensemen with four points (1g-3a) in five postseason games.

Last season, Zellweger suited up for Team Alberta at the 2018-19 Canada Winter Games and had a goal and an assist in six games. In 2017-18, he led OHA Edmonton Bantam Prep (CSSBHL) for scoring among defensemen with 32 points (10g-22a) in 30 games, while adding five points (3g-2a) in five postseason games and helping guide the program to a league title. He carried eight multi point games through the regular season from the blueline.

That season, Zellweger also skated in the Alberta Cup (Team Edmonton Blue) and earned a goal and an assist in five games.

Prior to the start of play, the teams will take to the ice for pre-tournament games on Thursday, October 31, (6pm PT). Team Canada Black will match up against Finland at the Crescent Point Wickenheiser Centre in Shaunavon, Sask., Sweden will play the Czech Republic at the Centennial Regional Arena in Brooks, Alta., Team Canada White will face off against Russia at the Innovation Credit Union i-Plex in Swift Current and Team Canada Red will meet the United States at the Canalta Centre in Medicine Hat.

The Silvertips were represented in the event last year with defenseman Ronan Seeley, and head coach Dennis Williams.

After Wednesday’s game, the Tips continue their homestand Friday at 7:35 p.m. vs. Tri-City, and Saturday at 7:05 p.m. vs. Prince Albert. Tickets are available at the links below.