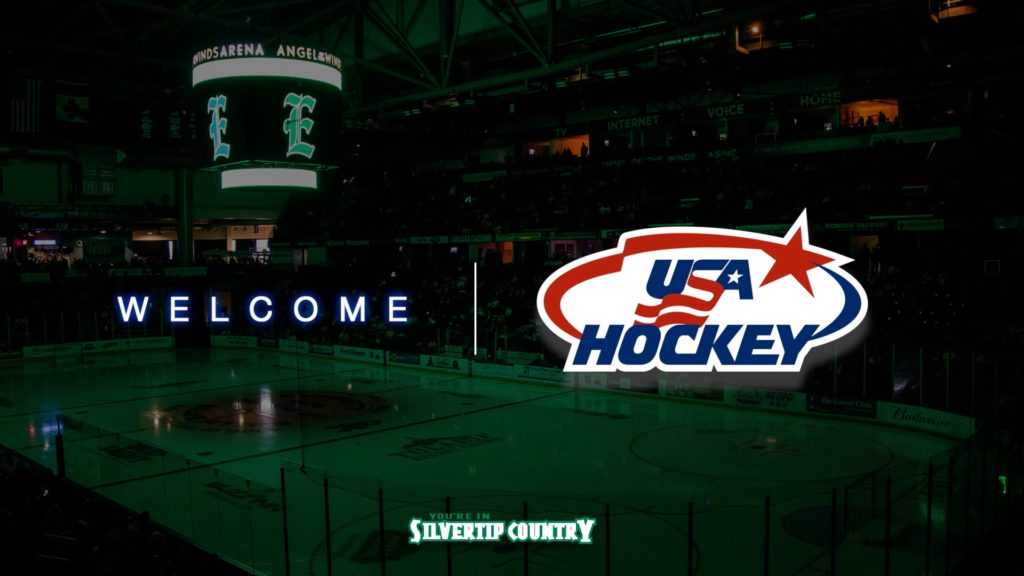 EVERETT, Wash. – The Everett Silvertips (@WHLSilvertips), six-time U.S. Division champion and defending Western Conference champions of the Western Hockey League, announced in conjunction with USA Hockey that the Silvertips and their home ice, Angel of the Winds Arena in downtown Everett, will host the 2019 U.S. National Junior Team training camp Dec. 14-18 in preparation for the 2019 IIHF World Junior Championship.

The camp, which will include the best U.S. players under the age of 20, serves as part of the selection process in determining the final roster that will represent the United States in the World Junior Championship starting Dec. 26, hosted in Vancouver and Victoria, B.C. John Vanbiesbrouck, assistant executive director of hockey operations for USA Hockey, is serving as general manager and will lead the evaluation process alongside head coach Mike Hastings and assistant coaches David Lassonde, Steve Miller, Scott Sandelin, and Jerry Keefe. Team USA will skate in downtown Everett starting Dec. 15 before departing on Dec. 18 for final tournament preparations in Kamloops, B.C., and Langley, B.C. All practices will be open to the public.

“On behalf of Consolidated Sports Holdings and the Everett Silvertips, we are proud to welcome Team USA to downtown Everett in preparation for the 2019 World Junior Championship,” said Silvertips and Consolidated Sports Holdings chief operating officer and governor Zoran Rajcic. “It’s a testimony to the continued growth of the game in the Pacific Northwest, Snohomish County, and downtown Everett, and to host the country’s top young players was an incredible opportunity to take on. As the World Junior Championship provides an annual worldwide stage to the future of the NHL, we look forward to providing a welcoming environment for USA Hockey’s preparations to compete against elite level competition from around the globe.”

The Silvertips are currently in their 16th season of play in the WHL and have competed on home ice A.O.T.W. Arena, 30 miles north of Seattle, Wash., since their inaugural 2003-04 season when they shattered multiple expansion records in the WHL, including most wins by an inaugural franchise and eventually reaching the WHL Championship Series. The Silvertips have reached the WHL Championship Series twice, most recently as last season, have captured six U.S. Division titles in 15 seasons, have sent 18 players onto competition in the NHL, and have 22 players in franchise history who have been selected in the NHL Draft.

Current Silvertips competing as U.S. born players include Everett, Wash. native and defenseman Wyatte Wylie, who was the first player in Silvertips history to make his WHL debut with the club then be selected in the NHL Draft (fifth round, 127th overall by the Philadelphia Flyers) after competing in Everett Youth Hockey. Goaltender Dustin Wolf, a current resident of Snohomish County and native of Tustin, Calif., was ranked among the preliminary ratings by NHL Central Scouting of players eligible for the 2019 NHL Draft.

The Silvertips have three players competing for the club as native of the state of Washington: Wylie, Luke Ormsby (Everett, Wash.), and Dawson Butt (Buckley, Wash.).