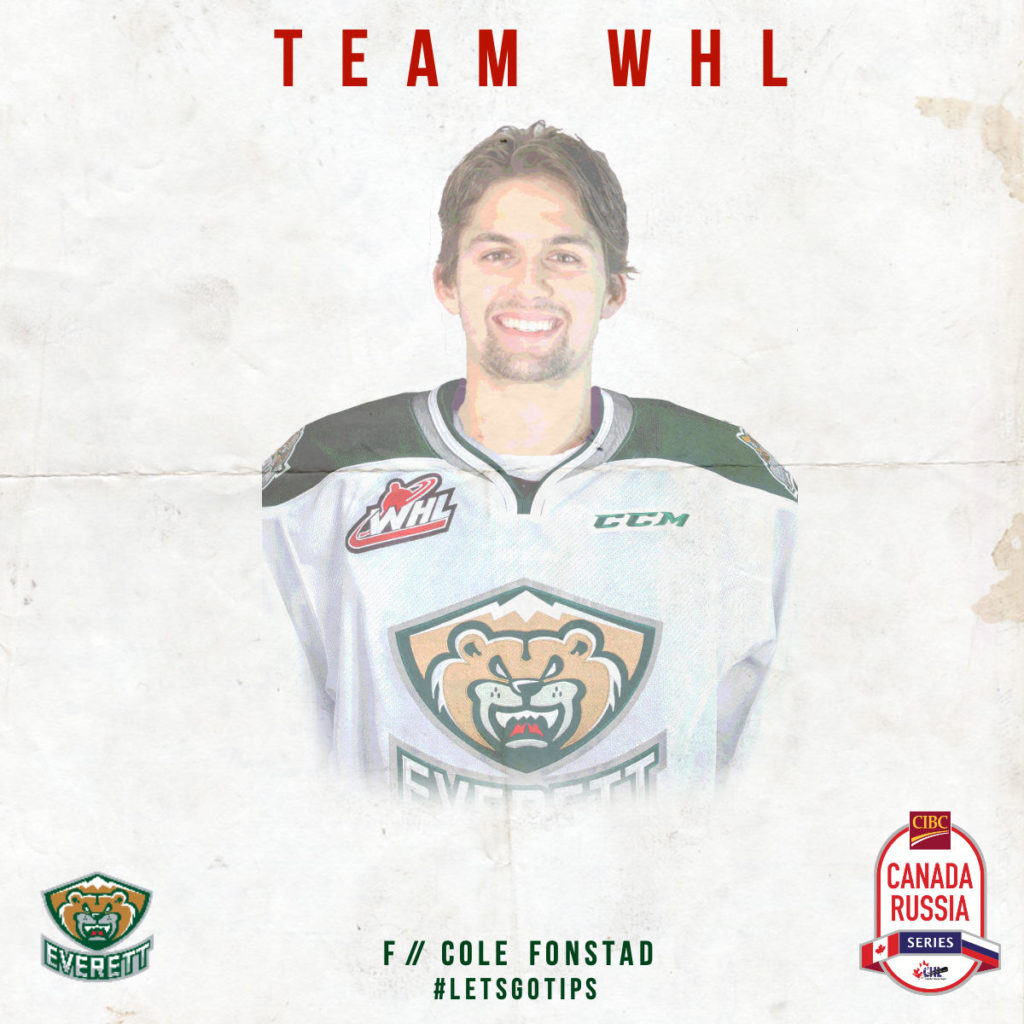 Fonstad is available to make his debut for the Silvertips tonight after being acquired by the Silvertips from Prince Albert on Oct. 13. Last season he helped Prince Albert capture the WHL title last season and a berth in the Memorial Cup and was selected by the Montreal Canadiens in the fifth round (128th overall) of the 2018 NHL Draft. He and the Silvertips continue play tonight, when a five-game homestand continues against the Brandon Wheat Kings, 7:05 p.m. at Angel of the Winds Arena in downtown Everett.

Fonstad joins Team WHL as part of an assortment of NHL prospects from Canada selected in the NHL Draft or eligible for the 2020 NHL Draft, scheduled to compete against the Russian National Junior Team. Team WHL is part of a selection process including prospects from the Ontario Hockey League and Quebec Major Junior Hockey League, vying for a roster spot with Team Canada at the upcoming World Junior Championships. Fonstad’s selection marks the fifth straight season the Silvertips will be represented in the event, joining Noah Juulsen (2015-16), goaltender Carter Hart (2015-17), and forwards Riley Sutter and Connor Dewar (2018).

Fonstad, a 2000-born forward currently in his fourth full WHL season, arrives in Everett with nine points (2g-7a) in nine games this season and last year helped guide the Raiders to the league championship, ranking third on the program with 73 points (29g-44a), third in assists (44), second in power play assists (14), and fourth in power play points (19) in 67 games. His 73 points matched his career high previously set in 2017-18 with the Raiders when he also led the club with 52 assists, appearing in all 72 games.

En route to the WHL title, the native of Estevan, Saskatchewan earned six points (2g-4a) in 21 postseason games, had a goal and an assist in the WHL Championship Series against Vancouver, and earned a goal and a pair of assists in three Memorial Cup games. He has 11 points (6g-5a) in 28 career WHL Playoff games and earned an invite by Team Canada to the 2019 World Junior Summer Showcase, a step in the roster selection process for upcoming IIHF World Junior Championship.

After Wednesday’s game, the Tips continue their homestand Friday at 7:35 p.m. vs. Tri-City, and Saturday at 7:05 p.m. vs. Prince Albert. Tickets are available at the links below.