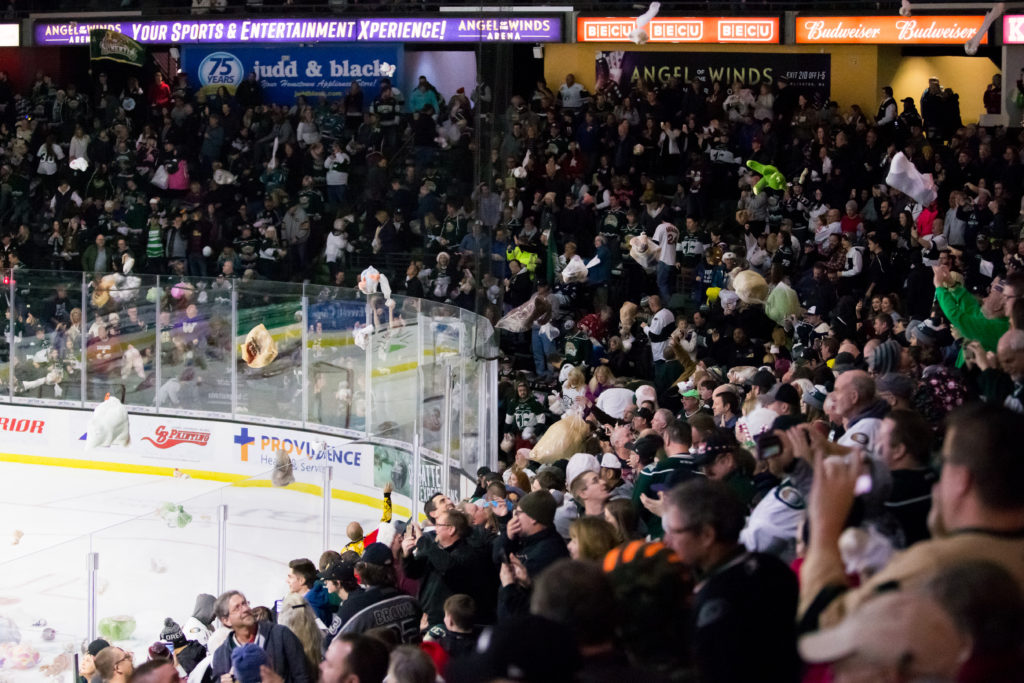 EVERETT, Wash. – The Everett Silvertips (@WHLSilvertips) have announced that a franchise record 9,719 stuffed animals and teddy bears were donated and collected during their annual Teddy Bear Toss game presented by Jersey Mike’s – Evergreen Way, Dec. 15 against the Seattle Thunderbirds at Angel of the Winds Arena in downtown Everett.

The Silvertips hosted this year’s Teddy Bear Toss game in collaboration with Christmas House, Jersey Mike’s Evergreen Way, Les Schwab Tires, and Warm 106.9’s Teddy Bear Patrol. The Silvertips’ first goal of the night was scored by second year forward Martin Fasko-Rudas in the first period at 7:57. Following the goal, nearly 9,800 teddy bears and stuffed animals were thrown onto the ice by the sellout crowd of 8,133 in attendance.

The Silvertips defeated the Thunderbirds, 6-1 that evening with representatives from NHL Seattle and USA Hockey in attendance.

The Teddy Bear toss game is designed to collect donations and toys for organizations such as Christmas House, and give them to underprivileged families with children with ages varying from infant to 18 years of age.

The Silvertips have helped collect and donate over 34,700 stuffed animals since the return of Teddy Bear Toss to downtown Everett in 2015-16.

The Silvertips are currently in the holiday break with the second most points in the WHL, ranked #5 in the CHL Top 10. The Tips return to play Friday, Dec. 28 at Spokane beginning at 7:05 p.m. (KRKO / Tips App / WHL Live) and return home the next evening at 7:05 p.m., hosting the Prince George Cougars in downtown Everett. Tickets are available at www.everettsilvertips.com/tickets.