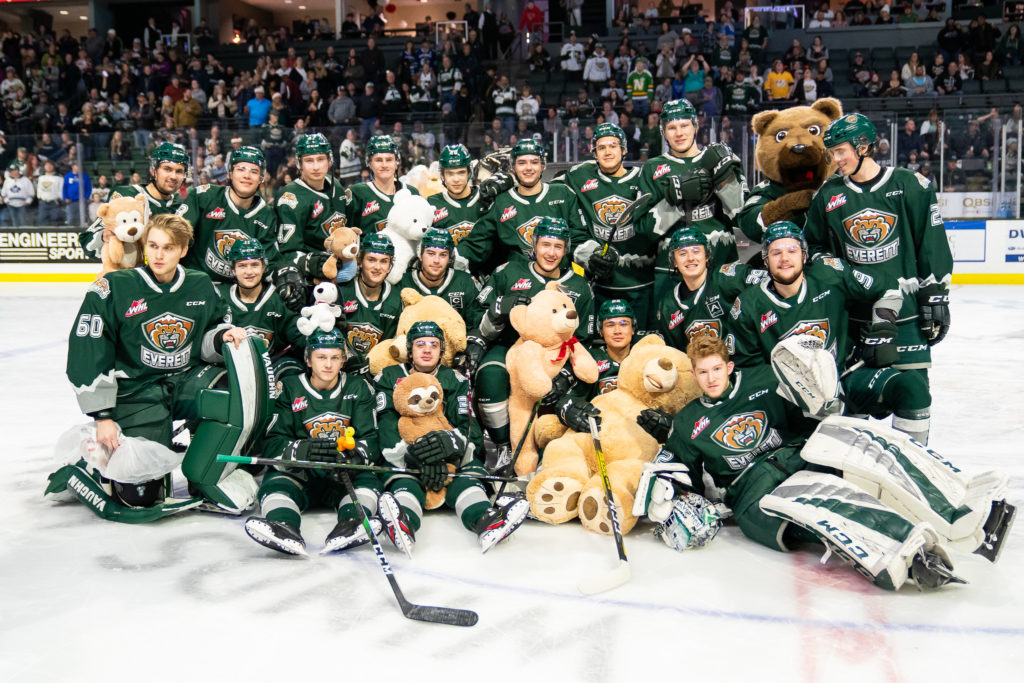 The Silvertips hosted this year’s Teddy Bear Toss game in collaboration with Christmas House, ACE Hardware, and Warm 106.9’s Teddy Bear Patrol. The Silvertips’ first goal of the night was scored by captain Bryce Kindopp in the first period at 1:52. Following the goal, nearly 10,300 teddy bears and stuffed animals were thrown onto the ice by the crowd of 7,388 in attendance. The Silvertips defeated the Vancouver Giants, 3-2.

The Teddy Bear toss game is designed to collect donations and toys for organizations such as Christmas House, and give them to families with children with ages varying from infant to 18 years of age.

The Warm 106.9 Teddy Bear Patrol Supplies teddy bears to area hospitals, fire departments, police stations, social services and other organizations to give to children in high stress or frightening situations.

The Silvertips have helped collect and donate over 44,900 stuffed animals since the return of Teddy Bear Toss to downtown Everett in 2015-16.

UP NEXT: The Tips play once more before the Christmas break as they host the Tri-City Americans on December 18th. Everett is 2-1 against Tri-City this season, as this is their third time hosting the Americans this year. Face-off is 7:05pm (KRKO / Tips App).

The game, “Ugly Sweater Night,” presents a ticket offer at the link below, offering a game ticket and “ugly holiday sweater” inspired t-shirt for as low as $30. Fans in attendance are encouraged to wear any pre-owned “ugly holiday sweaters”, eligible for in-seat prizes throughout the game and participation in an ugly sweater contest, held during the intermission.