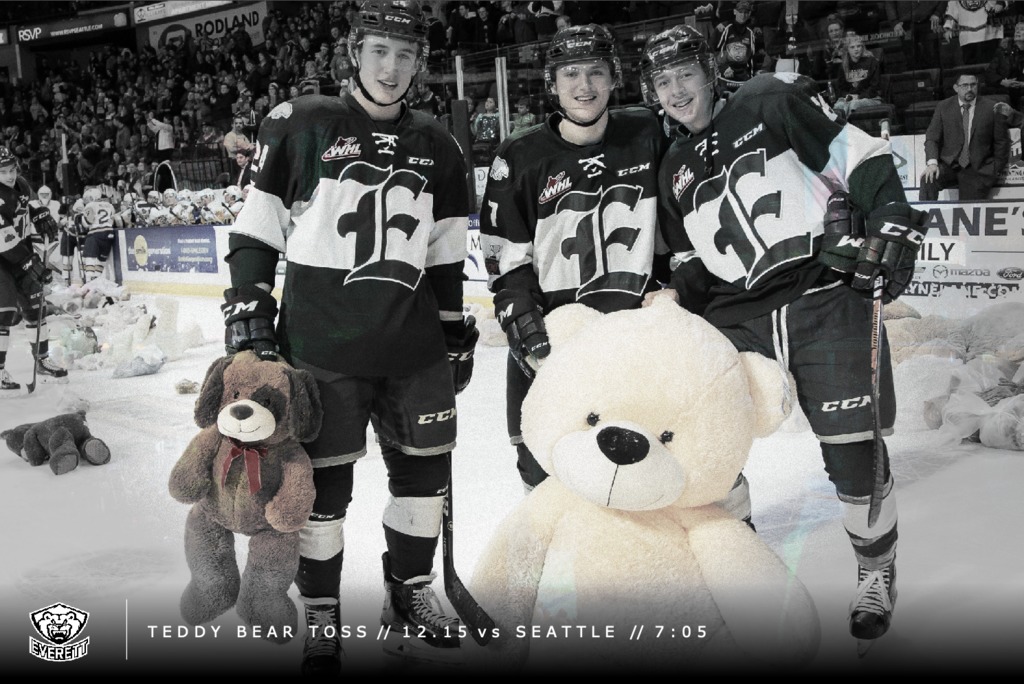 EVERETT, Wash. – The Everett Silvertips (@WHLSilvertips) have partnered with Jersey Mike’s – Evergreen Way, Les Schwab Tires, Broad Stroke Associates, Christmas House and Warm 106.9 to again host Teddy Bear Toss for the fourth year in a row, Saturday Dec. 15 at in downtown Everett at Angel of the Winds Arena, at 7:05 pm against the Seattle Thunderbirds.

The Silvertips Teddy Bear Toss, a renewed tradition, is designed to collect new or gently used stuffed animals to donate to support the Christmas House organization along with distribution assistance from WARM 106.9’s Teddy Bear Patrol. Once the Silvertips score their first goal of then evening, fans in attendance are encouraged to throw their teddy bears onto the ice, to be collected and distributed to Christmas House and WARM 106.9 in support of underprivileged families and children during the holiday season.

Last year Montana Onyebuchi found the back of the net less than six minutes into the first period, scoring what would be the game winner as Carter Hart blanked the Saskatoon Blades, a 4-0 win, and beginning the toss. Over 8,500 bears were collected that night at AOTW arena.

If the Silvertips do not score their first goal of the game within the first pair of 20 minute periods, fans will be asked to throw their teddy bears onto the ice during the second intermission, replacing the intermission’s Chuck-A-Puck activity.

Tickets remain on sale with an extremely limited amount available in the lower level of A.O.T.W. Arena. A “ticket and toss” bear combo offer for as low as $17 is available at www.everettsilvertips.com/teddybeartoss or by calling (425) 252-5100.