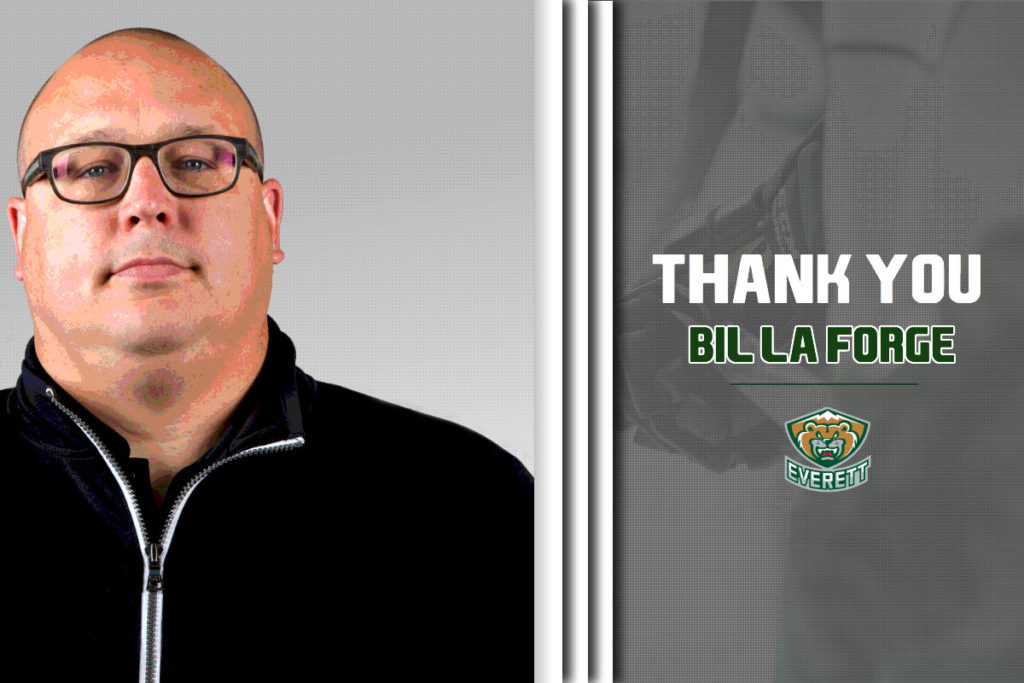 EVERETT, Wash. – The Everett Silvertips (@WHLSilvertips), two-time Western Conference champions and six time U.S. Division champions of the Western Hockey League, announced Bil La Forge, who had served the Silvertips for the last ten seasons including his most recent position as Director of Player Personnel, has accepted an offer for the general manager position of the Seattle Thunderbirds of the WHL.

La Forge originally began with the Silvertips in 2008, was promoted to Head Scout in 2011-12, and to Director of Player Personnel for the previous four seasons where he supervised and coordinated the Silvertips scouting personnel.

“We are proud to commend and thank Bil La Forge on ten years of excellent service he provided to the Everett Silvertips within hockey operations,” said Silvertips general manager Garry Davidson. “We admit it’s a difficult day to see such a fantastic individual move onto the next chapter of his career. Bil rose through our ranks from a scout to Director of Player Personnel with a tireless work ethic, dedication, attention to detail, and his communication skills. It’s no surprise he is primed for this opportunity to lead a WHL franchise as general manager. Bil will remain a part of our family, and it’s another example of our proven track record to prepare individuals for opportunity and new challenges. At this time, we are underway with our search to fill the position of Silvertips director of player personnel.”

The Edmonton native worked under general manager Garry Davidson to coordinate the Silvertips scouting, drafting, and assistance with recruiting efforts. In his first WHL Bantam Draft as Silvertips head scout, the franchise selected six players in the 2012 WHL Draft who appeared in the WHL at 16 years old, including current Montreal Canadiens defenseman and Tips alumnus Noah Juulsen, defenseman Kevin Davis, and forwards Patrick Bajkov and Matt Fonteyne, the latter three players who finished top three for games played in Silvertips history by the end of the 2017-18 campaign.

“I am very thankful to the Everett Silvertips organization and to Mr. Bill Yuill, Garry Davidson, and Zoran Rajcic for a tremendous opportunity to serve in my capacity for over the last decade,” said LaForge. “The opportunity to take on a great challenge as a general manager in the WHL was too good to pass up, which meant a very difficult decision. My time in Everett was nothing but spectacular, and the Silvertips have fully entrenched themselves as an organization dedicated to winning and development with the people who embrace those core values. I’m grateful for their endorsement of pursuing career ambitions, and I will always cherish a great relationship with Silvertips management, coaches, staff, and players.”