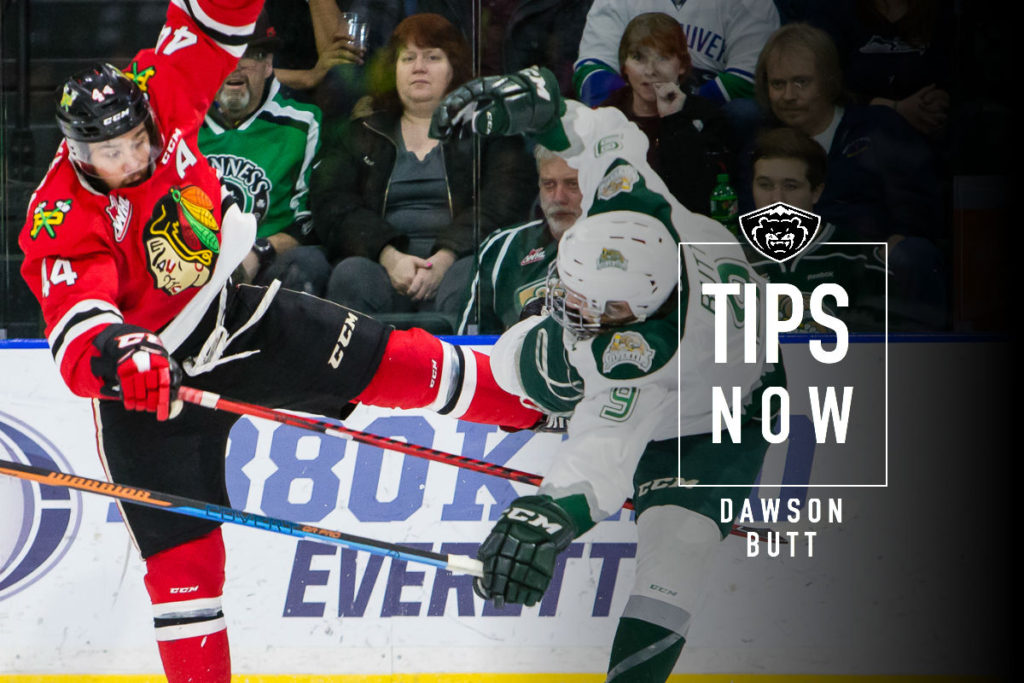 “For every action, there is an equal and opposite reaction.”
– Newton’s third law

Count on Dawson Butt to be the forward in the middle of exercising Newton’s third law for every loose puck along the boards.

Or for many scrums.

Or for plenty of scoring chances.

With his physical makeup and early stage of his WHL eligible career path already in motion, the pieces are in place to make a big impact on that path.

It starts this summer and in a place not too far away from Everett. A product of the Silvertips outreach into local hockey, Butt is originally from Buckley, WA, a Pierce County set-up which is also the home of Jamie Butt, a former 6-foot and 190-pound forward drafted by the New York Rangers and frequently tore through opposite reaction as a four year forward with the Tacoma Rockets with a rugged and hard-nosed approach.

You can tell by Dawson’s raw physique and approach to the game that the “apple doesn’t fall far from the tree.” He wasn’t afraid to mix it up in several scrums in training camp, preseason games, and even three regular season games (he was also +1) as an affiliated call-up with the Silvertips.

More games at a lower level gave him an outlet to flash his raw offensive ability. Under Jr. Silvertips (16U midget club) head coach Turner Stevenson, a former Stanley Cup winner with the New Jersey Devils, Dawson led the Jr. Tips with 29 points and a whopping 18 goals in 22 games, also tacking on six points in four postseason games before joining the big club for the remainder of the season on Mar. 13.

MITCH LOVE: “There’s great bloodlines for Dawson Butt. His Dad was a longtime WHL player and a guy who played the game with an edge, and there’s a little bit of that in Dawson’s game.

There’s also an offensive flair to Dawson’s game. He’s got a nice, quick release and a hard shot for a young guy. He grew up in an area that doesn’t have a dominant hockey background, so there’s a lot of things in his game that he needs to learn. But he’s played under a great midget coach in Turner Stevenson, so he’s learned a thing or two.

The one thing I noticed Dawson’s development as a 16-year old, in midget hockey, was that he came into training camp raw. He wasn’t ready yet based on the physical side and the commitment it takes to play at this level. But I think he went to the midget level, learned a thing or two from Turner, worked on his conditioning, and came back to us playing in games by doing an admirable job.”

HOW CONDITIONING STRENGTHENS YOUR GAME FOR THE LATTER MONTHS:

LOVE: “His style of play delivers a game where he likes to get into people. He likes to lean on people as a bigger body. He’s almost 195 pounds already. So when you’re going across the rink from side to side, finishing your checks and mixing things up, you have to be in phenomenal shape. I think that’ll be imperative and I think he understands missing the boat last season will only benefit him (for the remainder of his WHL career) and how important this summer is.”

DO YOU EVER HAVE TO WORRY ABOUT DAWSON BUTT’S COMPETE LEVEL?

LOVE: “I don’t think so. Again, he’s a big kid for a 16-year old (Butt will turn 17 on Aug. 8). He grew up around his father who made a living playing that way. He understands that side of the game. If you watch NHL playoff hockey and listen to some of the coaches, you’ll hear about compete level and how it’s improved. For any hockey player, it’s compete level and work ethic that tops over any skill. It’s nice to have skill, but compete level will never be an issue with Dawson.”

The Silvertips will announce their training camp schedule for 2017-18 soon.