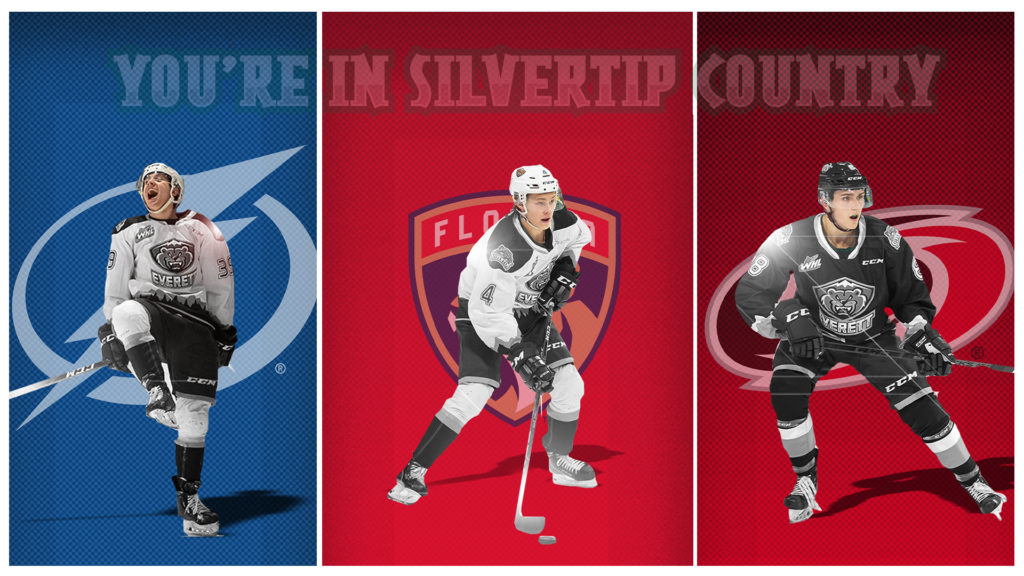 Ronan Seeley was expecting this day to come, one where every early alarm clock, long drive, lengthy practice, gut-wrenching workout, and tank-emptying WHL game would build up to in hopes of a happy ending.

He was hoping to be one of over 200 players in the world to be selected in the NHL Entry Draft, hosted 100 percent virtual this year due to the coronavirus pandemic.

Only, he didn’t know when the moment would come.

So, he had two choices: either sit at home and nervously watch the time and draft board pass by, or get out of the house and play golf.

He took the latter.

“I just had to get my mind off things,” he said.

It paid off. By the time he passed the 10th hole at Olds Golf Course, he got the word he was waiting for. The Carolina Hurricanes became his NHL team of opportunity, selected in the seventh round of the draft.

“Yeah, it’s a bit of relief that it took a while,” said Seeley, unsuccessful at concealing a smile as he blended his thoughts while pausing on a hole during the back nine.

“But I’m super excited to get things going.”

Seeley brought up the rear on a train of three Everett Silvertips selected in the 2020 NHL Entry Draft on October 7. It further elevated their careers and reinforced a stamp on a program surging in the last three years with NHL opportunity.

With Gage Goncalves going to the Tampa Bay Lightning in the second round, Kasper Puutio to the Florida Panthers in the fifth round, and Seeley to the Hurricanes, it’s calculated an impressive:

The trend is becoming clear: make the Silvertips roster, and you’ve got a world of opportunity in front of you.

How that world expanded for three players in October: 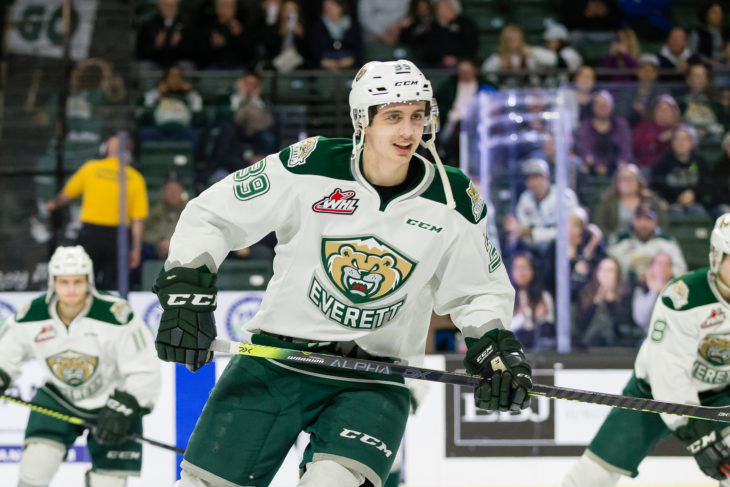 Going from one to 33 goals, just one season apart is one sure-fire way to grab attention. How Goncalves got there, and to his present day as a Lightning draft pick, is awe-inspiring. Passed over in the WHL Draft and resigned to potentially playing at the Junior-A or Junior-B level, Goncalves earned a pair of unsigned camp invites with the Silvertips, torched the BC Major Midget League with the Fraser Valley Thunderbirds (71 points in 40 games), and was rewarded with a WHL contract in the middle of the 2017-18 season.

Next year, stashed behind a wealth of experienced talent in a team coming off a Western Conference title, Goncalves was able to crack the lineup 67 times – though amounting to one single goal – in his first draft eligible season.

He decided, going home for the summer, it was time for the hockey world to pay attention.

“I just took everything into more detail,” said Goncalves. “More of a mindset that I wasn’t just going to be satisfied with minutes, or a couple points a week. I wanted to score. I wanted to be the guy who could score the goal, set up that play every single night. Just how my mindset and attitude changed – that was really a big step for me.”

Silvertips general manager Garry Davidson noted how much the mental function dialed up his physical function. 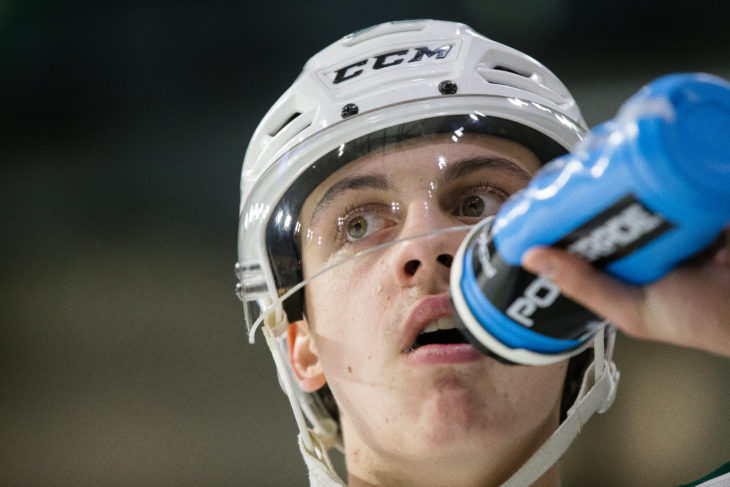 “He went home, got stronger, came back more determined, and said ‘ok, I’ll show everyone I’m deserving of a bigger role’,” said Davidson. “He took the bull by horns and never looked back. Gage is a fast learner, a quick learner, and an astute person but also has very good hockey instincts – his proof is in the pudding.”

Head coach Dennis Williams, who has been with Goncalves since his very first game, understood the learning curve his pupil has been mastering.

“I thought he came back (last year) with a great summer of training, lots of confidence, and wanting to prove he was a top six player,” said Williams. “From the time we got back to Everett to when guys had to go home due to COVID, he was an excellent player.”

“What he does away from puck, 200 feet, he plays to the expectations and responsibilities. He’s a knowledgeable player who understands all the systems. As the year went on we saw his stock as a player rise and he got up for big games. He proved he was worthy of being drafted.”

Goncalves said in the Stanley Cup Playoffs that he kept his eyes on Lightning forward Anthony Cirelli, who moved through the CHL as a Memorial Cup champion with the Oshawa Generals and shares in common: undrafted walk-on as a CHL player, prodigious numbers as a forward, and a style of play relying on unrelenting work ethic, intelligence. Goncalves’ reputation for his heavy shot and one-timer don’t hurt either.

“It just kind of show if you put your mind to something and keep working, and you love that much, you’ll get there one day,” said Goncalves. “You’ve just got to keep trusting the process, don’t look too far ahead because it may spoil things, but keep your head down, keep chugging away.”

Finishing his words at home in Mission, British Columbia as his family prepared for a celebratory dinner over pizza, Goncalves’ next step: take a bigger bite out of the hockey world.

It was 12:30am in Finland when Kasper Puutio found out on his couch, beside his parents that he would be officially a Florida Panthers prospect. It’s hard to go to bed wondering what your future in hockey will be, and what kind of course it can take in a matter of hours by the time you wake up. 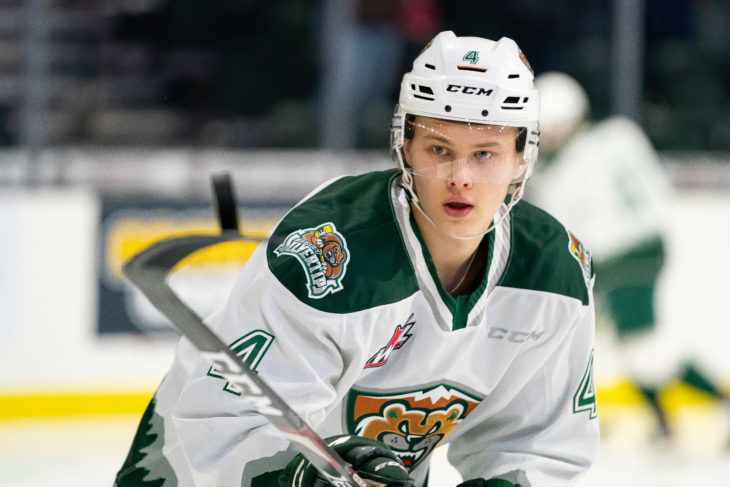 Puutio wakened the hockey world not by sheer, surface statistics. Instead, the previous first overall pick in the CHL Import Draft started out with flashes of 200-foot brilliance on a Swift Current Broncos team struggling for wins, then enhancing his effectiveness in all three zones after a trade deadline deal to the Silvertips.

So when all that adds up to a life milestone that happens when most people have already gone to bed, consider it a difficult task to try to go to bed.

“It really is a dream come try to be drafted by the Panthers,” said Puutio. “Since I was a kid and knew about the NHL Draft, I was dreaming to be picked one day. Finally to see my name there it was a dream come true for sure.”

Currently skating on loan to Kärpät in the Finnish Elite League, Puutio has embarked on a journey to stay fresh to cover the months before the Silvertips are expected to return to play, January 8. As his game continues to grow with a recognizable brand of poise, intelligence, and offensive touch, he has a realistic shot of making the Team Finland squad for the World Juniors, in Edmonton and Red Deer around Christmastime. 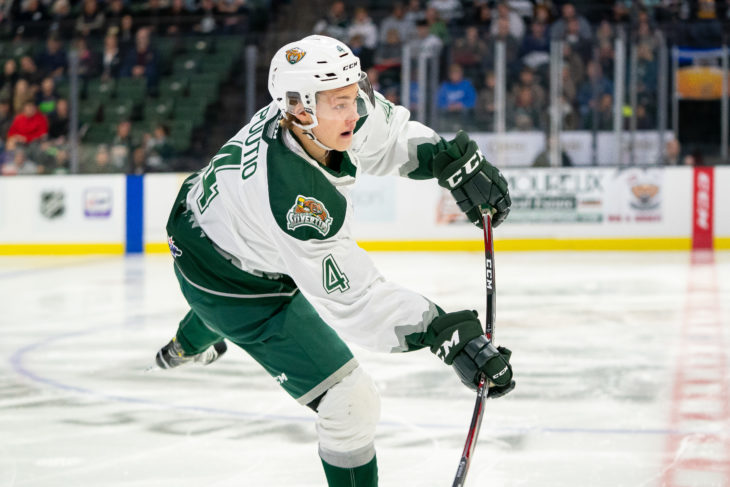 “We got to appreciate how good of a shot he had (to be drafted) as last season went along,” said Davidson. “He impressed immediately at how he controlled gaps and defended well. His game stepped up several notches. (Florida) got a good prospect moving forward and he’s a guy who may see himself at the World Junior Championships.”

The trade for Puutio (with Swift Current’s former captain and face-off turbine Ethan Regnier) came at the right time. Little did anybody know, but stalwart defenseman Gianni Fairbrother’s season was about to come to an end due to an untimely injury he suffered around the deadline, and was shelved for the remainder of the season.

As the insurance on the blueline kicked in, Puutio’s education on the Silvertips style of play eventually blossomed into key minutes in late, close-score situations, special teams assignments, and a run of 11 points in the final 12 games before the 2019-20 season was shut down due to the pandemic.

“It’s not easy – Kasper came in at trade deadline and was behind a veteran D corps,” said Williams. “We had the likes of Wyatte (Wylie), Jake (Christiansen), Ronan, Olen (Zellweger), and Dylan (Anderson). When Kasper came in, there was transition period. But once he got acclimated, understood systems, played to his strengths, and alleviated pressure of being the number one pick in the Import Draft, he settled in.”

Puutio already committed this summer to enhancing his nutrition with older brother, Konsta, following up a two-month period of living with a stalwart Silvertips defenseman, on the cusp of signing a contract with the Columbus Blue Jackets and fresh off half of a season with the Calgary Flames AHL affiliate in Stockton.

“He learned a lot from Jake, on and off ice on what it was like to be a pro hockey player,” said Williams. “He was trending in the right direction up until COVID and I’m really happy with his play and conditioning. He’s very educated, wants to be a pro, acts like a pro and commits himself to being a pro hockey player.”

Back to Seeley, where golf was a balance to the stress and sometimes relentless anticipation of draft day: he sought a calm, and at times – detached – environment, just to keep composure. 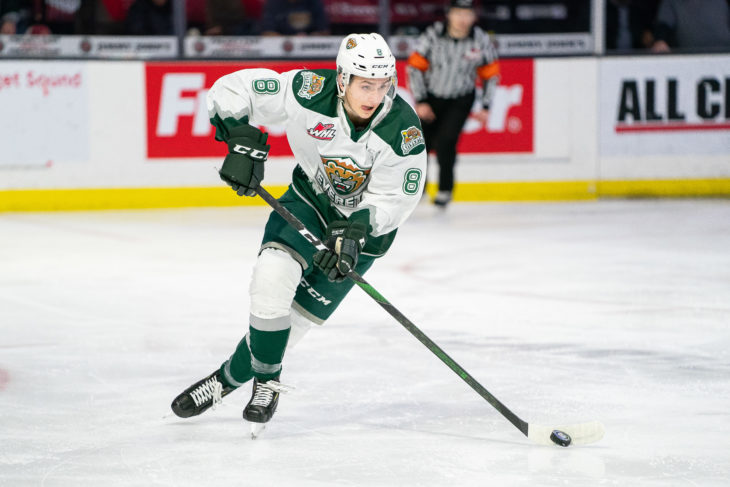 Maybe it’s a microcosm of his game. Through two seasons, rarely do you see panic in his shifts. There’s a pursuit of calm amidst the chaos. Add that to the unfolding of a smoother skating, quick decision-making, and dependable defenseman, and in the Silvertips’ hands is a newly minted Carolina Hurricanes prospect defenseman some suggested as a shock that he was still available in the seventh round.

“I spoke to Ronan as soon as I saw his name come up (in the draft) and I told him ‘Ronan, it doesn’t matter where you get drafted – it’s what you do after you get drafted,” said Davidson. “Nobody will care a year from now (how far in the draft) he went. It’s what he does from here on out. Ronan possesses a great attitude, understanding of the game, and has started to address strength. If he does that and continues to improve, he’s got real potential moving forward.”

Like Puutio, a game that demonstrates Seeley’s value beneath basic numbers caught the attention of plenty of suitors before the end of the season, though the basic data indicated improvement and still, plenty of vacancy to fill in his potential as he jumped 23 points from WHL freshman to sophomore. The demand for that production also came with ice time granted to the veteran, established defensemen who logged heavy minutes in the Tips run to 46 wins. 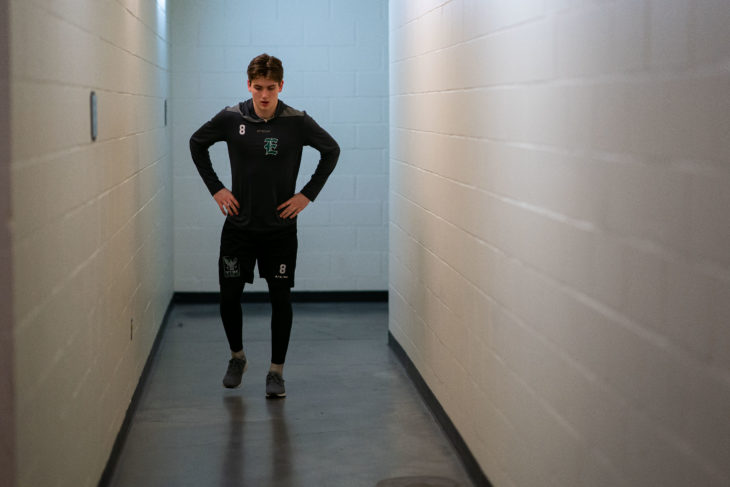 More than a meek, soft-fabric defenseman who can generate, he improved his strength by deadlifting more than 400 pounds in the gym during the summer, and off the ice by embracing his role as a student in the video classroom, often administered by assistant coach Louis Mass.

With older players moving on and the opportunity to play in a bigger role on the horizon, those habits don’t go unnoticed by his head coach.

“He’s a sponge,” said Williams. “He loves video, learning, and watching himself get better with shifts. Just seeing him grow as a player, I’ve seen so much in two years – he’s given us strong play on our second power play unit. Playing on his off side as a first year defenseman: it’s difficult for 1st year players.”

“It didn’t surprise me in how (Carolina) took Ronan. He’s a great puck moving defenseman, sees the ice well, has a great stick, and comes with high character. He wants to be hockey player. He leads by example and is a ‘team first’ guy.”

With the worlds of Goncalves, Puutio, and Seeley changing, in downtown Everett, there are elements that stay the same: