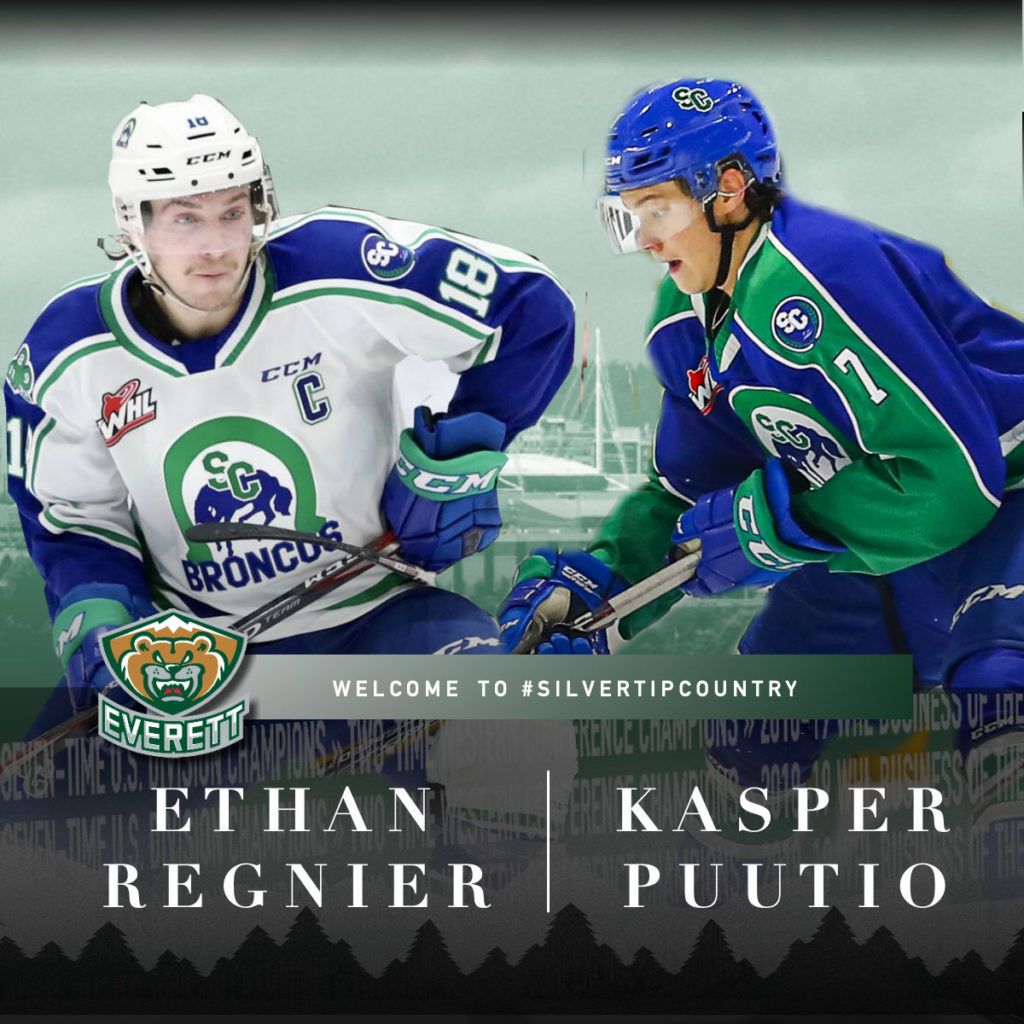 Regnier, a 2000-born forward who served as captain this season of Swift Current and was a member of the Broncos 2017-18 WHL championship squad, will join the Silvertips along with Puutio, the first overall selection by Swift Current in the 2019 CHL Import Draft, ranked by NHL Central Scouting for the upcoming 2020 NHL Entry Draft, and scheduled to compete in the 2020 Kubota CHL/NHL Top Prospects Game.

“Ethan and Kasper are two very exciting players that have the abilities to entertain our fans every night, and address needs of our club down the stretch,” said Davidson. “We’ve been working hard to acquire a player with Ethan’s skill set and intangibles, as he developed into a dependable and productive forward who earned the role as captain in Swift Current. With Kasper, the sky is the limit. He’s rightfully earned serious attention for the upcoming NHL Draft as a defenseman with high end skill, and there’s still plenty of mileage ahead of him in this league. We’re extremely satisfied with the individuals we’ve added and look forward to welcoming Ethan and Kasper to Silvertip Country.”

“We acknowledge every time, in the effort to fortify our club, decisions like these are very difficult. It’s important for us to recognize Martin as a committed player who prepared to battle every day with an amazing attitude, and was an integral part of our Western Conference championship team in 2017-18. Parker made leaps and bounds this season as a reliable defenseman and his effort was relentless. We wish both absolutely nothing but the best in the next steps of their careers, and we’ll always consider them a part of our organization.”

The native of Prince Albert, Saskatchewan suited up in three postseason games, en route to the Broncos capturing the 2018 WHL title and has 60 points (21g-39a) and 46 penalty minutes in 159 career WHL games, all with Swift Current. He has notched three multi point games and twice earned three assist outings this season, both named with three stars honors.

Puutio, a 2002-born defenseman, led all Broncos defensemen and ranks third among WHL rookie blueliners with 16 points (1g-15a) in 35 games, also tied for second on the Broncos in power play assists (3). The native of Vaasa, Finland will skate (Team Red) in the 2020 Kubota CHL/NHL Top Prospects Game on Thursday, Jan. 16 in Hamilton, Ontario as one of 40 players across the Canadian Hockey League showcased as draft-eligible talent, organized by NHL Central Scouting.

The 5-foot-11, 184-pound blue liner was selected first overall by Swift Current in the 2019 CHL Import Draft, previously helping the Kärpät U20 squad earn a league championship of the Jr. A SM-liiga division, posting a goal and three assists in 31 games. He also suited up for 10 games with the U18 Jr. B SM-sarja team, earning 12 points (4g-8a)

On the international stage, Puutio picked up four assists in six games at the World Under-17 Hockey Challenge in Quispamsis and Saint John, New Brunswick in 2018-19, helping Finland to a silver medal and notched three assists in three games for Finland at the Hlinka Gretzky Cup, shortly before this season.

Fasko-Rudas, a 2000-born forward from Banska Bystrica, Slovakia, has eight points (4g-4a) in 17 games this season and for his career has 54 points (25g-29a) in 147 career WHL games, also suiting up in 30 career WHL Playoff games with 17 points (9g-8a) while helping the Silvertips capture the 2018 Western Conference title. He was originally selected by the Silvertips in the first round (58th overall) in the 2017 CHL Import Draft.

Hendren, 18, has a goal and an assist in 38 games this season and was acquired by the Silvertips from the Vancouver Giants on Aug. 31, 2019 in exchange for a conditional draft selection. The native of Regina, Saskatchewan has two goals and two assists along with 19 penalty minutes in 76 career WHL games with the Silvertips and Giants.

The Tips return home Sunday, Jan. 12 against the Regina Pats at 4:05 p.m. Tickets are on sale for the Jan. 12 home game, the next Siegen Family Fun Zone event. The first several hundred fans in attendance will take away a Tips beanie presented by BECU.