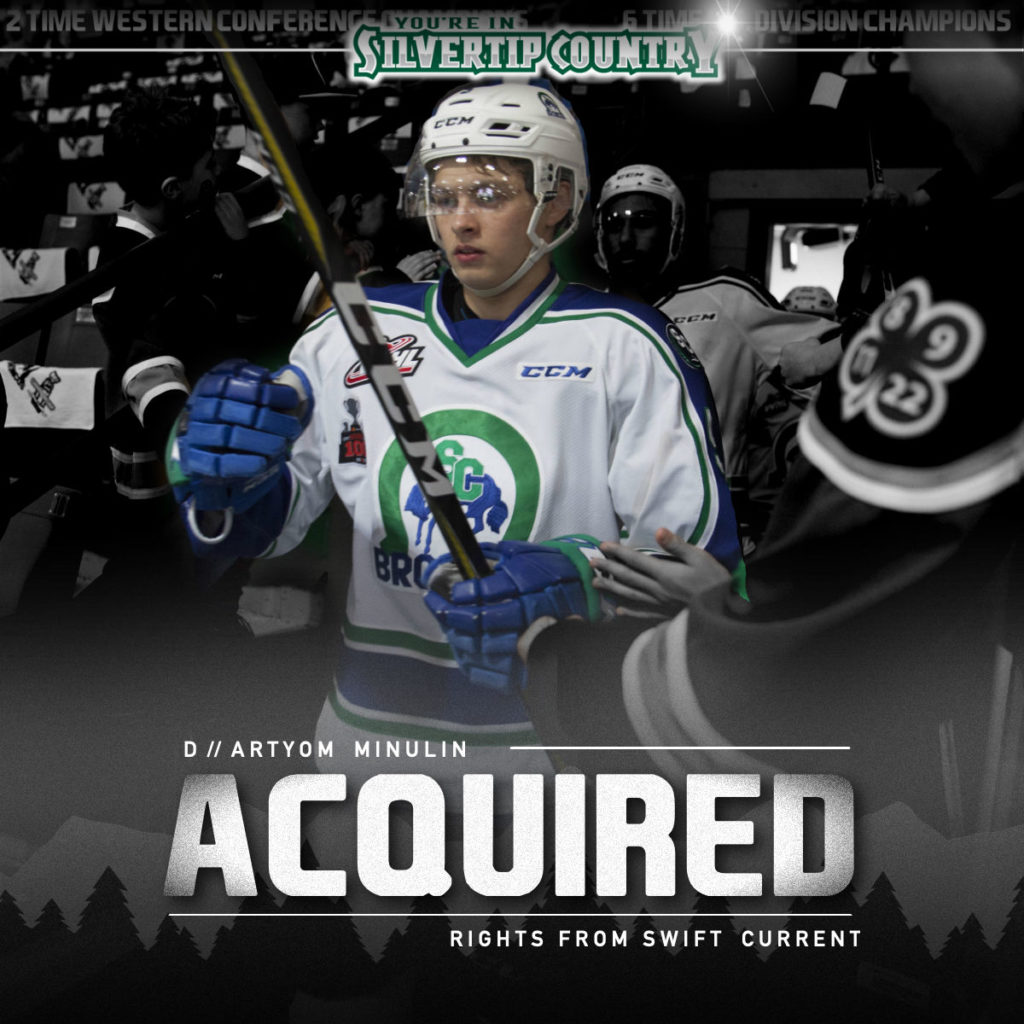 “Artyom Minulin is a special talent who elevates the play of his teammates,” said Davidson. “We’re excited to acquire his rights as a player eligible to fill a 20-year old slot and a vacant import slot with Peter Melcher currently unavailable to play. The role he’s excelled in as a high impact defenseman played a big piece in helping Swift Current win the WHL championship last season, and was internationally recognized with playing time in the World Junior Championships.”

“He carries a tremendous reputation as a defenseman with an extremely hard shot, deft touch with the puck, and acumen to excel in all three zones. We look forward to welcoming him to the Silvertip family upon the attaining of his necessary documentation.”

Minulin, 20, carries 126 points and a +66 rating in 206 career games across three WHL seasons, all with Swift Current and was originally selected by the Broncos in the first round (29th overall) in the 2015 CHL Import Draft. The native of Tyumen, Russia last season scored a career-high 13 goals and had 43 points and a +37 rating in 64 games, ranking second on the Broncos in scoring among defensemen. He helped Swift Current win the WHL title and represent the league’s champion in the MasterCard Memorial Cup tournament with eight points in 20 postseason games, additionally racking up three assists in three Memorial Cup games.

The 6-foot-3, 201-pound blueliner skated for Team Russia at last season’s World Junior Championship in Buffalo and appeared in five games. Minulin additionally suited up for Team Russia at the 2017 CIBC Canada Russia Series and helped Russia earn a gold medal at the World U17 Hockey Challenge in 2014-15. His career high for points in the WHL was when he led all Broncos defensemen with 50 points (8g-42a) in 70 games in 2016-17.

Minulin, who has 15 points and a +7 rating in 34 career postseason games, joins overager defenseman Sahvan Khaira on the Silvertips as reunited teammates after skating the previous two-plus seasons together in Swift Current.

Moar, a 2001-born defenseman, suited up in four games this season with the Silvertips as a rookie and was selected by Everett in the fifth round (102nd overall) in the 2016 WHL Draft.

“Alex was a tremendous individual and teammate in our dressing room, and wore our crest with pride,” said Davidson. “We projected him to develop into a quality defenseman in this league, creating a difficult decision for us when this opportunity came along. We wish him well in the next chapter of his development.”

The Silvertips return to play at home on Nov. 2 against the Tri-City Americans at 7:35 p.m. in downtown Everett. Tickets are on sale at www.everettsilvertips.com/tickets.