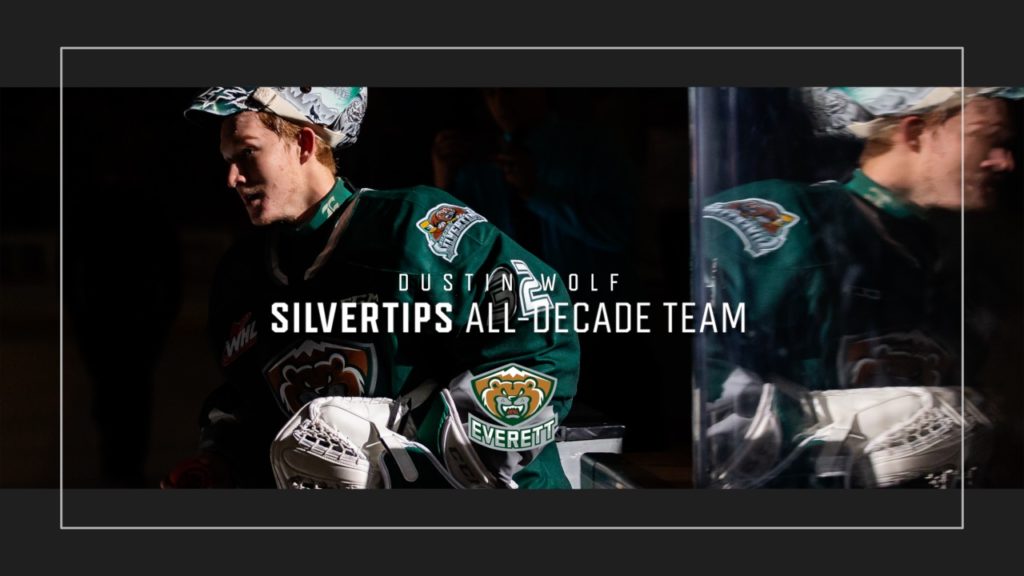 Dustin Wolf: a goaltender from Gilroy, Calif. who has taken the WHL by storm as CHL Goaltender of the Year with a fearless approach in net, rocksteady numbers, and a future with the Calgary Flames as an NHL Draft pick.

One of eight players making a return trip to the squad, he and Team USA captured the gold medal in the World Juniors on Tuesday night.

Selected by the Calgary Flames in the seventh round of the 2019 NHL Draft, he signed a three-year, entry level contract with the Flames on May 1 after he finished as leader or tied for the WHL lead in four goaltending categories: wins, shutouts, save percentage, and goals-against-average while, was named Silvertips co-Most Valuable Player and twice was named WHL Vaughn Goaltender of the Month last season. With Wolf between the pipes, the Silvertips reached the top of the WHL’s U.S. Division and Western Conference with a 44-12-3-1 record through 60 games, good for 92 points and finishing the season with victories in 13 of their final 14 games, a 46-13-3-1 record, 96 points – second most in the U.S. Division and entire league. He led the WHL in goals-against-average (1.88), shutouts (9), save percentage (.935), and tied Joel Hofer of Portland for the league lead in wins (35), going 34-10-2-0 in 46 games.

Wolf is 88-31-4-2 in 127 career Silvertips and WHL games with a .934 save percentage, 1.85 goals-against-average, and 20 shutouts. He needs seven shutouts to set a new Silvertips and WHL career record, currently shared by Hart and Tyson Sexsmith of Vancouver (26). The 6-foot, 161-pound goaltender was the fifth consecutive honoree from the Silvertips as Western Conference Goaltender of the Year.