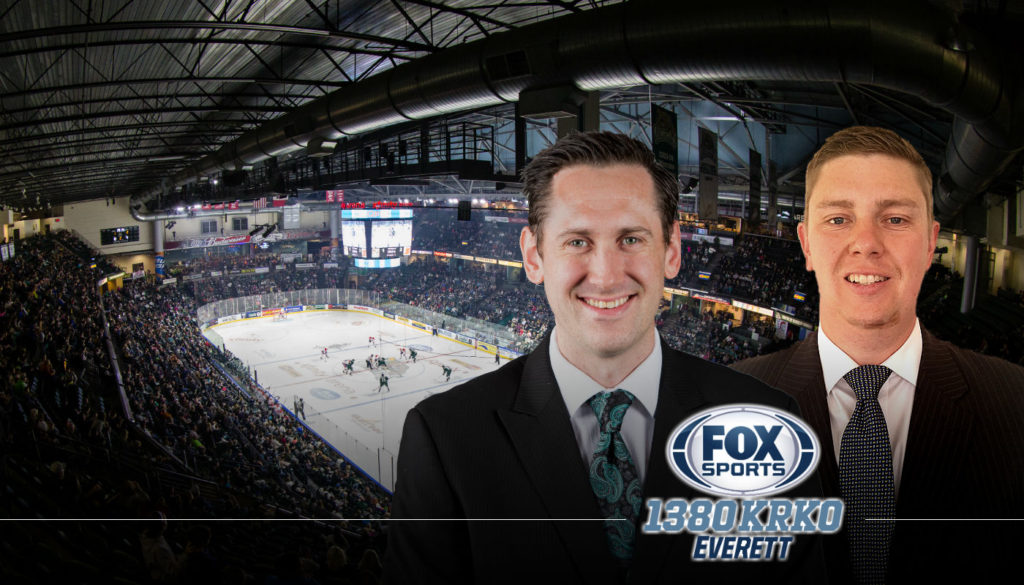 EVERETT, Wash. – The Everett Silvertips (@WHLSilvertips) announced their 2016-17 broadcast schedule and staff today, continuing an agreement with Fox Sports 1380 (KRKO-AM) as the flagship home of all Silvertips regular season and playoff games and the weekly home of the Silvertips Hockey Show, Tuesday nights during the from 6-7:00 p.m., and airing on live occasions at Sporty’s Beef and Brew in Everett.

Justin Morrison, who has handled on-air duties with the Silvertips before in select television and radio roles, has been named new radio color commentator for all home games on Fox Sports 1380. Morrison (@TipsATG) will work alongside on game nights with Mike Benton (@Benton_Mike), entering his second season handling on-air duties in play-by-play as radio voice of the Silvertips and host of the Silvertips Hockey Show, and studio host Keith Black, delivering scoreboard updates for select Silvertips games.

“We are extremely pleased to bring Justin aboard to work alongside Mike Benton for listeners on Fox Sports 1380,” said Silvertips chief operating officer and governor Zoran Rajcic. “Over the past several seasons, Justin made an impact among our listeners with authentic analysis and an engaging platform to break down the game. We’re excited about his ability to complement Mike, an elite level broadcaster who adores Silvertip Country and unfolds a compelling story every night. As Justin comes aboard, we owe a tremendous amount of gratitude to Al Kinisky, who served our listenership over the last decade, will always be a part of us, and whose wishes we recognize with respects to spending more time with family.”

Morrison, a native of Edmonds, most recently served as host of “Tips After The Game” from 2011-15 on Fox Sports 1380 and has spent time for three years behind the mic as television color analyst for Silvertips telecasts, airing on Xfinity OnDemand. His additional radio experience includes two years as a producer at KRKO while serving as play-by-play voice of the Everett Explosion of the International Basketball League in 2007.

Morrison is a graduate of Washington State University in 2006 with a B.A. degree in Communication.

On the radio dial at Fox Sports 1380 and on the Silvertips Mobile App, veteran radio play-by-play announcer Benton will return for his second season as the “Voice of the Silvertips” and 12th overall in hockey, working alongside Morrison while delivering a compelling hour of Silvertips interviews, analysis, contests and more with the Silvertips Hockey Show each Tuesday night during the season.

Radio coverage begins with the popular and informative 30-minute “Everett Bone and Joint Pregame Show,” included with the exclusive and engaging “Progressive Wellness Center Coach’s Show” with Silvertips head coach Kevin Constantine. When a regular season game on Fox Sports 1380 AM conflicts with additional live programming, the Silvertips can be found on the dial alternatively at Classic Country 1520 KXA (KKXA-AM).

During the season, exclusive player, prospect and alumni interviews, insight, listener interaction and more can be found on the Silvertips Hockey Show (making its season debut on Tuesday, Sept. 20) on Fox Sports 1380 and on the Tips App, airing Tuesday nights, 6-7pm and often live from family-friendly Sporty’s Beef and Brew restaurant in Everett. Select shows may air prerecorded or be preempted if Silvertips travel or Tuesday games conflict. All Silvertips games are also aired through live stream at WHL Live, found at whl.neulion.com/whl.

The Silvertips will open the 2016-17 schedule with a “home-and-home” series against the Vancouver Giants, launching Friday, Sept. 23 in Langley, B.C. at 7:30 p.m. (Fox Sports 1380/WHL Live/Tips App) followed by the Silvertips home opener against the Giants, Saturday night at 7:05 p.m. at XFINITY Arena. Single game tickets are now on sale by visiting online, the Tips App, calling (425) 252-5100 or visiting XFINITY Arena in person.