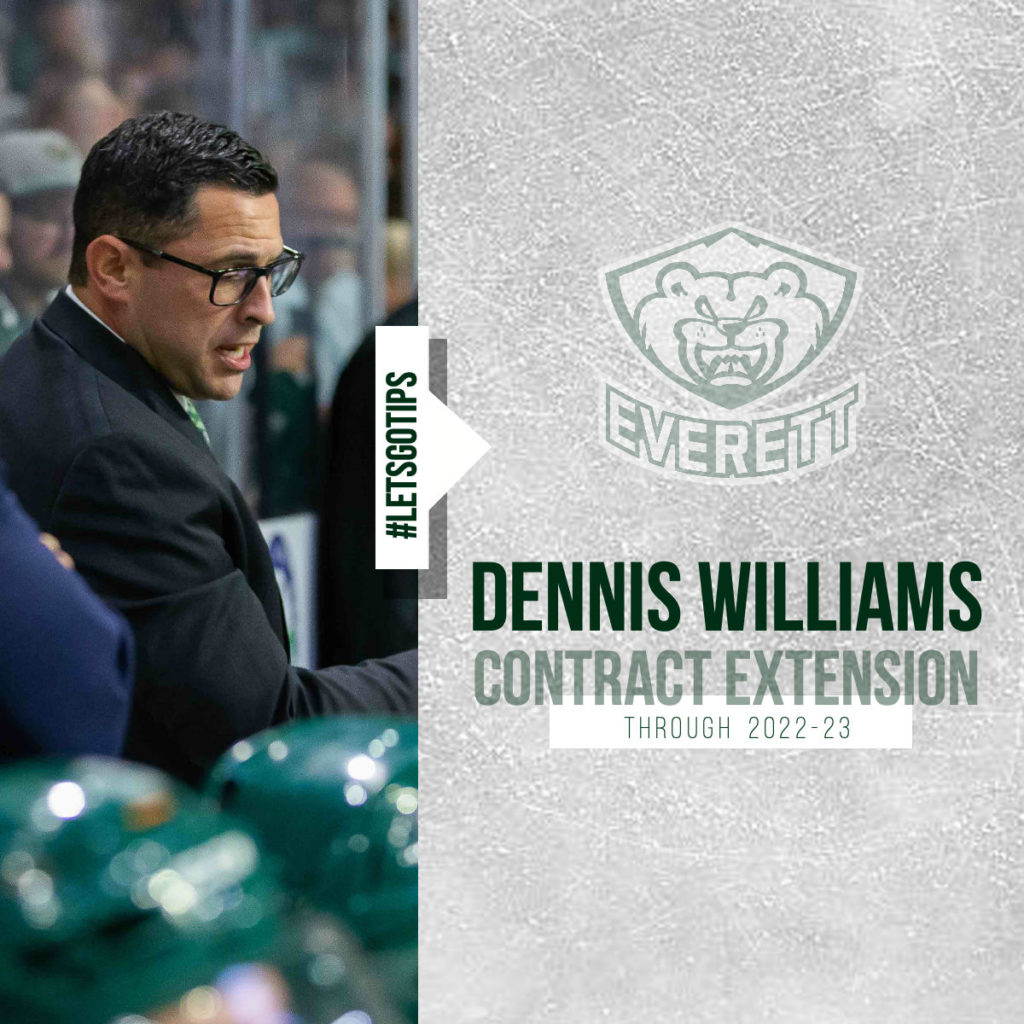 Williams, 40, is in his third season as Silvertips head coach, amassing a lifetime WHL record of 127-48-7-7 and a .710 points percentage, along with a 19-13 record in 32 postseason games and a Western Conference championship in the 2017-18 season. The Silvertips currently have a magic number of two points to clinch their 17th consecutive playoff berth, currently holding the longest active streak in the WHL.

“Dennis has dedicated himself to raising our program to another level and we’re extremely thrilled to secure his services on a long term basis,” said Davidson. “His winning track record, lengthy experience in junior hockey and additional involvement with Hockey Canada each speak volumes to his status as a rising star in the coaching profession. His approach to the modern game and athlete fall right in line with my philosophies and enhance a positive work environment. His day to day commitment to making each and every one of our players better, in their pursuit of hockey and in life, are core values we embrace as an organization. We look forward to his continued pursuits of those values and success in our organization.”

“It’s exciting to secure a long term commitment to the Silvertips organization, our players, and life for my family in the Pacific Northwest,” said Williams. “A tremendous amount of thanks is owed to Garry Davidson, Zoran Rajcic, and most certainly, Mr. Bill Yuill for the confidence in giving me an opportunity coach this program. I owe an incredible amount of gratitude to the terrific coaches I’ve worked with and top notch support staff. Everett is a crown jewel of the WHL and additionally, the players, fans, and extended community across Snohomish County make it an absolute reward to be a part of every day. Since we arrived nearly three years ago, my wife and two daughters have embraced the Puget Sound and to us, it’s home.”

“We play each night to win, but just as importantly, we’ve set a goal from the outset to give our players the best opportunity to play pro hockey. They’re here for it, and we want them to succeed in that goal. It’s our responsibility as coaches to help navigate them on that path and help educate them on terrific options, such as a playing career in U Sports and opportunities for them to take advantage of the WHL scholarship program. It’s a great package the WHL provides, and we’re looking forward to continuing to help our players reach those achievements.”

Since being named Silvertips head coach on May 15, 2017, he ranks second in Silvertips coaching history in wins (127), games (190), points (270) and is currently the all-time leader in points percentage (.710). In the last two years since he joined behind the bench, the Silvertips have earned back-to-back U.S. Division titles, their second Western Conference title in franchise history, promoted five players to a selection by teams in the NHL Entry Draft, and six players to international competition rosters with Hockey Canada (Carter Hart, Ronan Seeley, Olen Zellweger), USA Hockey (Dustin Wolf), Team Slovakia (Martin Fasko-Rudas), and Team Czech Republic (Michal Gut).

This season, four Silvertips have been named to NHL Central Scouting’s midterm rankings ahead of the 2020 NHL Entry Draft in Montreal: forwards Gage Goncalves and Michal Gut, and defensemen Ronan Seeley and Kasper Puutio. 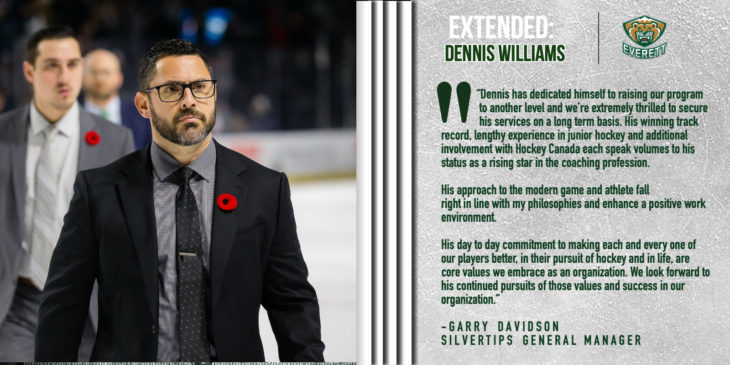 Williams embarked on his first season as a WHL head coach that set new benchmarks in Silvertips history, breaking the franchise record for wins by a first year head coach (47), setting the third most points (99) in franchise history, a new single season franchise record for goals (246), ranking second in the WHL for goal differential (+80), and earning eight goals or more in a game on five separate occasions. The Tips broke single game franchise records for most goals in a game (11) and largest margin of victory (11) on Dec. 27 in an 11-0 victory at Vancouver, while goaltender Carter Hart earned his second CHL Goaltender of the Year award, and Williams was named Western Conference honoree of the WHL Coach of the Year award. He followed with another 47-win and 99-point season last year, the Silvertips fourth U.S. Division title in five seasons, while goaltender Dustin Wolf was named WHL Western Conference Goaltender of the Year and CHL Scholastic Player of the Year and two more Tips players: defenseman Gianni Fairbrother (Montreal) and Wolf (Calgary) were selected in the NHL Entry Draft.

Williams’ coaching resume in international competition includes experience with Hockey Canada and a silver medal finish at the 2019 Hlinka Gretzky Cup, and head coach for Team Canada Black at the 2018 World U17 Hockey Challenge. 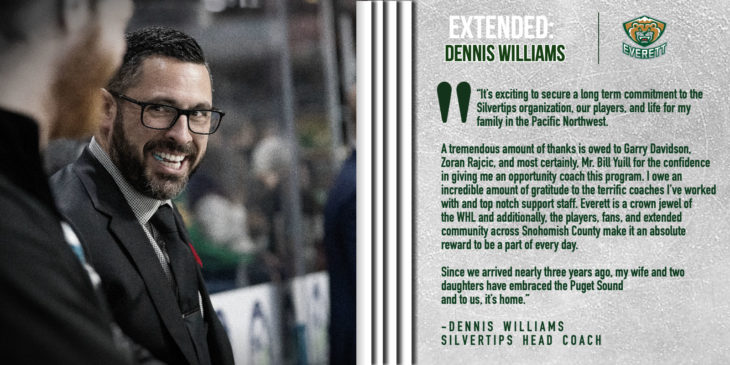 Currently in his 14th season as a head coach across junior and college levels, he holds a points percentage of .685 across the last nine-plus seasons as head coach with the Silvertips, Bloomington (USHL), and Amarillo (NAHL). He guided Bloomington to an Eastern Conference Final appearance in 2015-16 and led Amarillo to three straight 40-win seasons from 2011-14, three straight South Division titles, and a Robertson Cup title as NAHL Coach of the Year in 2012-13. During his time with Amarillo and Bloomington, he helped 74 players advance to play at the NCAA Division-I ranks, led his teams to 11 league award selections, and promoted 12 players to NHL Entry Draft selections or roster spots across international competition.

The native of Stratford, Ontario carries experience at the NCAA level as a coach with Utica College, Alabama-Huntsville, Neumann College and Bowling Green. Before earning his bachelor’s and master’s degrees from Bowling Green, he suited up as a right winger for the Falcons with 117 games of experience.

UP NEXT:  The Tips will return to AOTW Arena on Friday, February 14th when they take on the Seattle Thunderbirds at 7:35 PM. Union Solidarity Night and Valentine’s Day also present Hockey Happy Hour presented by Broad Stroke Associates, with doors opening at 6pm.