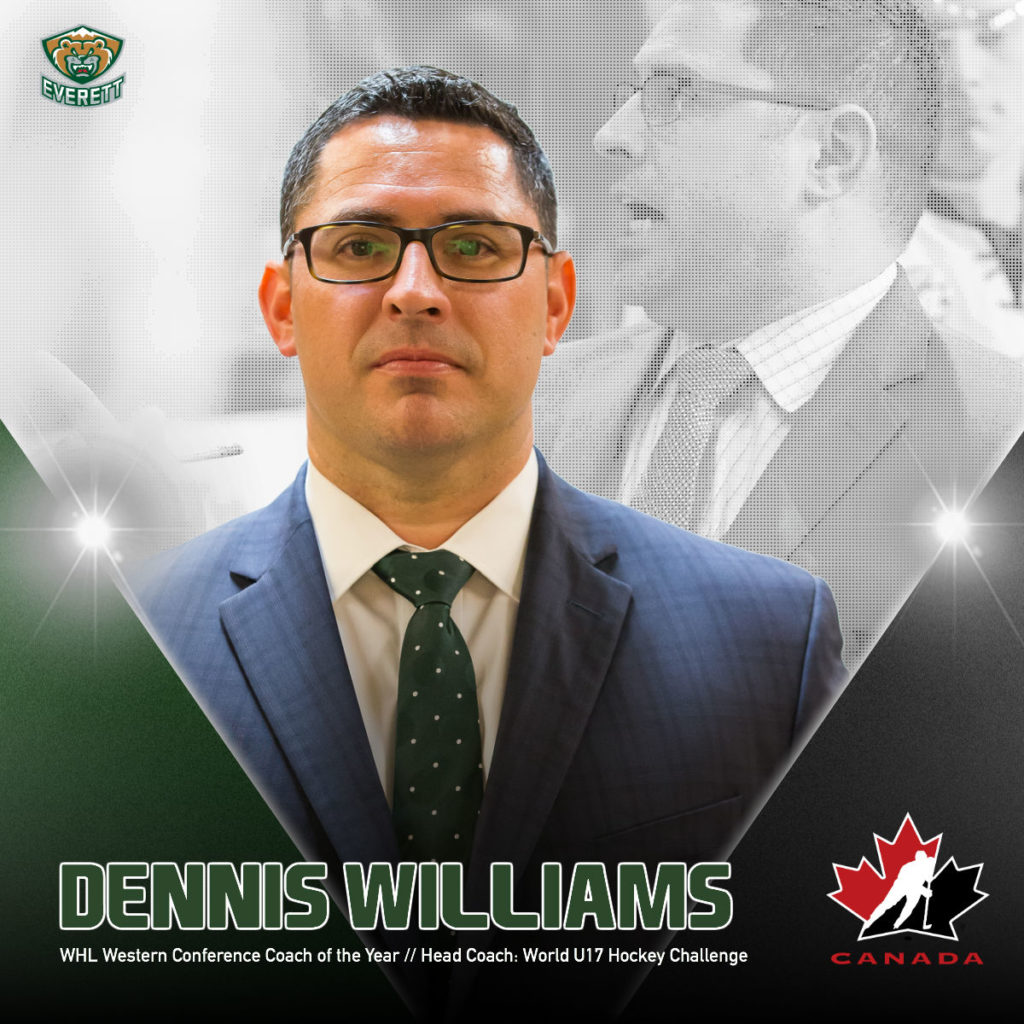 Williams will serve as head coach of one of three Canadian entries in the tournament. The World Under-17 Hockey Challenge will bring together the top players in the world born in 2002 or later, serving as the first step in Hockey Canada’s Program of Excellence. Many players who compete at the World Under-17 Hockey Challenge go on to represent Canada with the National Men’s Under-18 Team, National Junior Team and National Men’s Team.  Since the first under-17 tournament (then known as the Quebec Esso Cup) in 1986, more than 1,200 NHL draft picks have competed in the event.

“It’s an exciting day for us to congratulate head coach Dennis Williams on a hard-earned opportunity to serve as a coach for Hockey Canada at the World Under-17 Hockey Challenge,” said Davidson. “Dennis has deserved this on the merit of getting the most out of his players, his dedication, character, and leadership abilities. We’re confident he’ll be a tremendous representative of the Silvertips, and our program will be in good hands for his brief absence during the season with the additional coaching staff we are due to finalize very soon.”

“Many thanks go to Hockey Canada for an incredible opportunity to serve behind the bench at the World Under-17 Hockey Challenge and along with Team Canada Black assistant coaches Sylvain Favreau and Troy Smith,” said Williams. “It’s an extremely exciting challenge that makes me look forward to meeting all of the staff and players who will participate, including Ronan Seeley who earned a well-deserved opportunity. I’m ready to embrace the task of helping develop an excellent camp experience and prepare players for tournament competition.”

Williams, 38, was named WHL Western Conference Coach of the Year last season and led the Tips to their second Western Conference title in franchise history. Under his guidance during his first season behind the Everett bench, the Tips earned their second most regular season total in wins (47) and third most points (99) in franchise history and he surpassed Craig Hartsburg’s 46 victories (2009-10), most by a first year head coach in Silvertips history. With Williams behind the bench, the Silvertips went 37-8-1-2 since Nov. 19, seizing their sixth U.S. Division title in franchise history while accumulating seven 20-goal scorers, most for one season in Tips history.

The Silvertips scored 246 goals to set a new single season franchise record, were second in the league for goal differential (+80), and earned eight goals or more in a game on five separate occasions. They broke single game franchise records for most goals in a game (11) and largest margin of victory (11) on Dec. 27 in an 11-0 victory at Vancouver. Silvertips leading scorer Patrick Bajkov, signed in March to a three-year entry level NHL contract with the Florida Panthers, became the first Silvertip to collect 100 points in a season. Fellow 1997-born forward Matt Fonteyne signed an AHL contract with the San Jose Barracuda, three additional Silvertips – Connor Dewar (Minnesota), Riley Sutter (Washington), and Wyatte Wylie (Philadelphia) – were selected in the NHL Draft, and defensemen Jake Christiansen (Calgary) and Kevin Davis (Colorado) were invited to NHL development camps.

The native of Stratford, Ontario was named the fifth head coach in Silvertips history on May 15, 2017 and with the Amarillo Bulls (NAHL), he led the franchise to a Robertson Cup title in 2012-13 and three national tournament appearances while going 168-44-2-24 and a points percentage of .756 across four years in the NAHL. With the Bloomington Thunder (USHL), he guided the franchise to a trip to the Conference Finals in 2015-16. During his time in Amarillo and Bloomington, he helped 74 players advance to play in the NCAA ranks, and with the Bulls coached seven division All-Conference selections, two All-NAHL First Team members, and one division All-Rookie honoree.

“This country produces not only great players, but also great coaches. We had a tremendous amount of very qualified applicants, and the decisions were not easy,” said Shawn Bullock, Hockey Canada’s senior manager of hockey operations and men’s national teams. “The coaches we selected to lead our national men’s under-17 teams this summer and at the World Under-17 Hockey Challenge have considerable coaching experience from many different levels of hockey. Each coach brings something unique to the program, and we look forward to their leadership as they help develop the top young players in Canada.”

Silvertips defenseman Ronan Seeley, selected in the first round of the 2017 WHL Draft, will be competing at the Hockey Canada Summer Showcase, July 21-27 in Calgary for a roster spot in the World Under-17 Hockey Challenge.