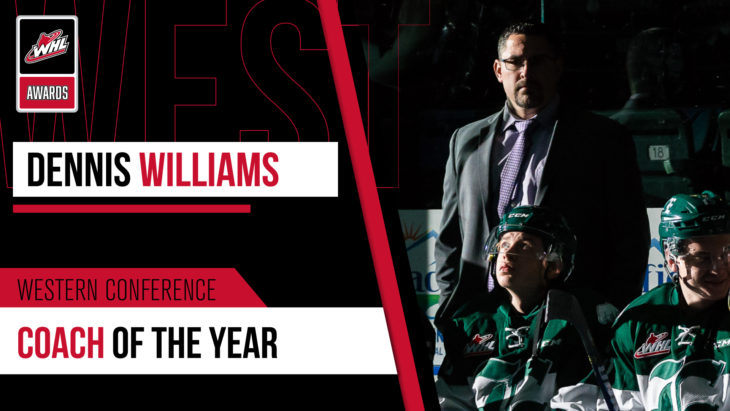 Williams, in his first season as Silvertips head coach, led the Tips to their second most regular season total in wins (47) and third most points (99) in franchise history while surpassing Craig Hartsburg’s 46 victories (2009-10), most by a first year head coach in Silvertips history. With Williams behind the bench, the Silvertips went 37-8-1-2 since Nov. 19, seizing their sixth U.S. Division title in franchise history while accumulating seven 20-goal scorers, most for one season in Tips history.

“I’m very thankful and honored to receive the WHL award for Western Conference Coach of the Year,” said Williams. “To me this award exemplifies a true ‘team award’ which couldn’t be accomplished without a great group of players. I would like to thank Consolidated Sports Holdings President, Mr. Bill Yuill, Chief Operating Officer Zoran Rajcic and General Manager Garry Davidson who have provided the opportunity to coach such a prestigious organization. A special thanks and the merits of our season cannot go unnoticed without Assistant Coach Mitch Love and all the time and effort he has put into the Everett Silvertips hockey program. Also, I would like to thank our hockey operations support staff including James Stucky, Shane Clifford, Patrick Pajak, and Blake Draughon, who put in tireless hours day in and day out.”

The Silvertips scored 245 goals to set a new single season franchise record, were second in the league for goal differential (+80), and earned eight goals or more in a game on five separate occasions. They broke single game franchise records for most goals in a game (11) and largest margin of victory (11) on Dec. 27 in an 11-0 victory at Vancouver. Silvertips leading scorer Patrick Bajkov, signed in March to a three-year entry level NHL contract with the Florida Panthers, became the first Silvertip to collect 100 points in a season.

The native of Stratford, Ontario was named the fifth head coach in Silvertips history on May 15, 2017 and with the Amarillo Bulls (NAHL), he led the franchise to a Robertson Cup title in 2012-13 and three national tournament appearances. With the Bloomington Thunder (USHL), he guided the franchise to a trip to the Conference Finals in 2015-16.

Williams, 38, led Amarillo to three consecutive 40-win seasons from 2011-14, amassing a career record of 168-44-2-24 and a points percentage of .756 across four years in the NAHL. He delivered three straight South Division titles, and back-to-back and league leading 46-win campaigns. During his time in Amarillo and Bloomington, he helped 74 players advance to play in the NCAA ranks, and with the Bulls coached seven division All-Conference selections, two All-NAHL First Team members, and one division All-Rookie honoree.

All individual WHL Conference Award winners will be eligible for the overall league awards at the 2018 WHL Awards luncheon in Red Deer, AB., on Wednesday, May 2. Williams is vying to become the second recipient of the Dunc McCallum Trophy for WHL Coach of the Year in Silvertips history. Kevin Constantine was named recipient of the award in 2003-04.

WHL Conference Awards are voted upon by all WHL General Managers and Head Coaches.