TIPS MOMENTS OF THE DECADE 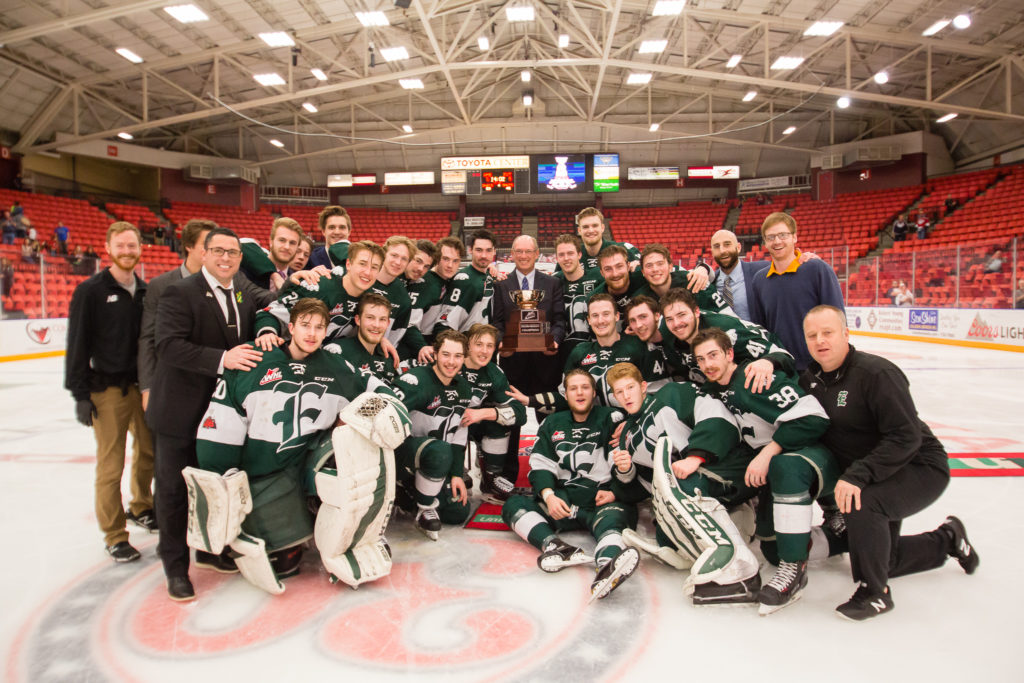 The Everett Silvertips carved more incredible moments in their path to greatness from their second decade as a WHL franchise, adding more to the trophy case, the awards resume, and countless numbers of players elevating their game to great heights in Silvertips lore and the NHL.

Silvertips broadcasters Mike Benton, and alums Jon Rosen and Travis Huntington, who had the calls for the Tips moments of the decade, compiled the following list:

In a 6-5 overtime victory over the Tri-City Americans, the Silvertips staged an incredible comeback for the ages, rallying back from 5-2 in the third period to claim their second Western Conference title.

It was an omen, set under the Craig Hartsburg era. The Tips would finish the season with 46 wins and 97 points, 3rd in the Western Conference and at the time: their second best output in franchise history.

Did he ever deliver on promise. Murray’s first season, with the 2009-10 Silvertips, captured a 27 point season and only set the table for more greatness as a top pair defenseman. As a late 1993-born blueliner, he would go on to become the 2nd overall pick in the 2012 NHL Draft by the Columbus Blue Jackets. He has played in seven NHL seasons.

At the time, it was the longest game in Tips history. They escaped a possible Game 7 showdown in downtown Everett by beating the Chiefs in an agonizing 3 overtime periods, finished by Low’s tuck at the Spokane net to claim the Tips first playoff series win in eight years.

The Tips made the playoffs that year, but as a re-tooling squad that had to battle until the final game of the season. They overcame three separate deficits in the third period to beat the Seattle Thunderbirds  in Kent, 6-4 on an eventual game winner by Cody Fowlie. The Tips went 6-4-1-0 to seize a berth on the final day of the season.

Ryan Murray’s big day at the draft became reality thanks to the Columbus Blue Jackets. After the Edmonton Oilers selected Nail Yakupov first overall, Murray became the highest drafted Silvertip ever in the NHL at PPG Paints Arena, taken ahead of fellow notables such as Alex Galchenyuk, Morgan Rielly, Jacob Trouba, Filip Forsberg, and Tomas Hertl.

Though not the most decorated Silvertips club, they scrapped to the very end. The Tips won twice against the juggernaut Portland Winterhawks, forcing Portland to six games in a hard fought first round series. No other opponent took Portland as far as the Silvertips did, setting the stage for a return to resurgence in 2013-14.

The Tips became a part of the Hockey Hall of Fame, advancing to the second round of the playoffs for the third straight year in the longest game in CHL history. Cal Babych scored on a breakaway in the fifth overtime against Victoria, winning the series 4-2 in a seven hour marathon on Vancouver Island. Babych’s stick went onto Toronto to become enshrined in the Hockey Hall of Fame.

Game 5 against the Swift Current Broncos in the 2018 WHL Championship Series prolonged the pinnacle series for the WHL title to six games, gave the Tips their first home finals win in franchise history, and set off a winning “goodbye” for departing overagers Matt Fonteyne, Kevin Davis, and Patrick Bajkov, sealing their last game ever in downtown Everett with a victory a near packed house.

Carter Hart, going down as a Silvertips legend in the record books, en route to an NHL career with the Philadelphia Flyers, notched his WHL record tying 26th career shutout on Feb. 10 against the Vancouver Giants in downtown Everett. Hart would go onto win his second CHL Goaltender of the Year award and the first Silvertip to earn the Four Broncos Memorial Trophy as WHL Player of the Year.