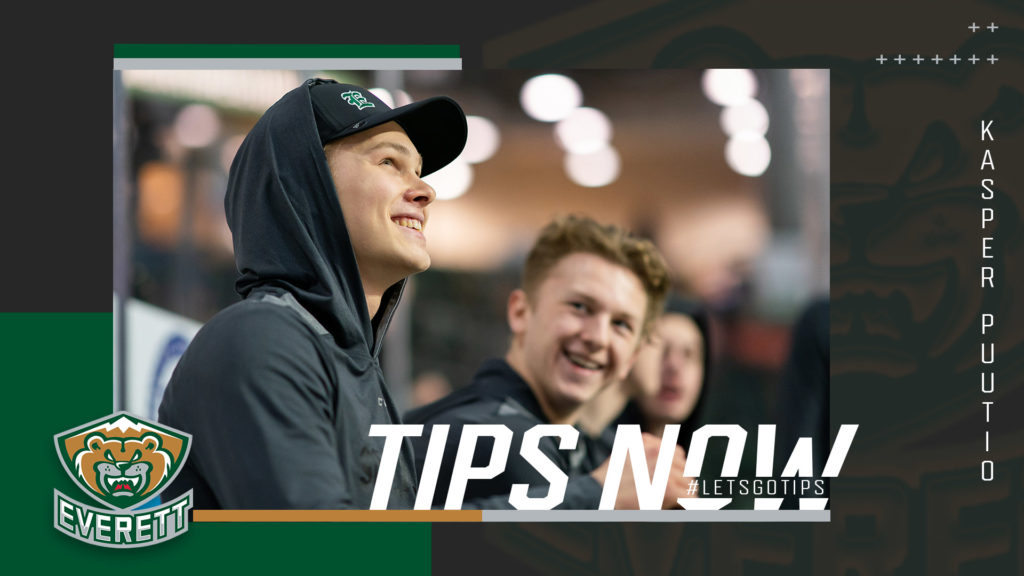 THE PLAYER: Mention the first overall selection in the CHL Import Draft and he needs no further introduction.

Many of us perhaps couldn’t imagine, with the Silvertips light years ahead of any kind of rebuilding mode, they’d land a player with that resume bullet just months after it happened. But here we are.

Kasper Puutio, a budding, young defenseman with “probable” as a word attached to his NHL Draft potential in a few months, carries a sky-high talent ceiling and was acquired by the Silvertips at the trade deadline in a four player, two draft pick deal. As the Silvertips bid farewell to a popular locker room presence in Martin Fasko-Rudas (eventually landing with Saskatoon in a later transaction) who would have had to play this season on the Silvertips as a “two spotter” (overager and import pick), the Tips fortified their blueline with the impending departures of Jake Christiansen, Wyatte Wylie (both aged out of the program) and Gianni Fairbrother – an incoming overager and one of the remaining holdovers from the Western Conference championship squad in 2018 – already on the shelf with an injury.

All of a sudden, the Tips are rock solid in their import situation for the longer term – both Puutio and Michal Gut are 2002-born players – and added a dynamic presence on their blueline to aid the transition for fellow younger d-men like Ronan Seeley, Olen Zellweger, and more. 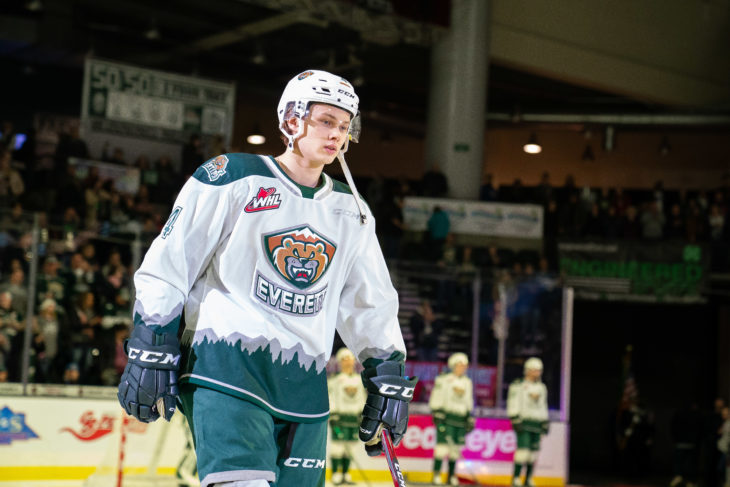 While Puutio won’t confuse anybody for the size of Victor Hedman or Zdeno Chara, skating and smarts help earn ice time these days. Puutio excels or has been rapidly improving at both, while getting more chances to play in power play situations – where his cannon like shot is a weapon – or in late game situations to protect a one-goal lead.

In other words, valuable qualities in defensemen who can perform as effective Silvertips.

THE NUMBERS: While Puutio’s surface numbers included one goal and 16 points in 35 games before the trade, his uphill climb as a WHL rookie included ice time on a rebuilding Swift Current Broncos squad that was 9-25-1-2 and had won just three times in the previous 15 games. His resume and potential still spoke volumes, and nailed a spot in the CHL/NHL Top Prospects Game – typically the highest nod and stage for upcoming star NHL Draft picks.

After the trade and upon arrival in Everett, Puutio’s game went next level. He nearly duplicated his output (12 points in his first 21 games as a Silvertip), pre-trade in almost half the schedule after the trade. He finished +13 as a Silvertip, drilled a pair of power play goals, and scored a memorable full-length of the ice, empty net heave against the Prince George Cougars in a Feb. 21 victory.

Pre-pandemic, Puutio was one of the hottest Silvertips across the roster: he had points in six of the last eight games on the blueline, and after Feb. 15 earned 11 points in 12 games – all the while, Wylie and Christiansen continued to churn big numbers in the Silvertips push for the top record in the league (they won 46 games anyway, nobody won more across the WHL).

Puutio, slated to come back for his second WHL season as a Silvertip – perhaps on the cusp of finding an NHL Draft suitor – shared more reflection from last season, and preparation for the starting line, ahead of 2020-21: 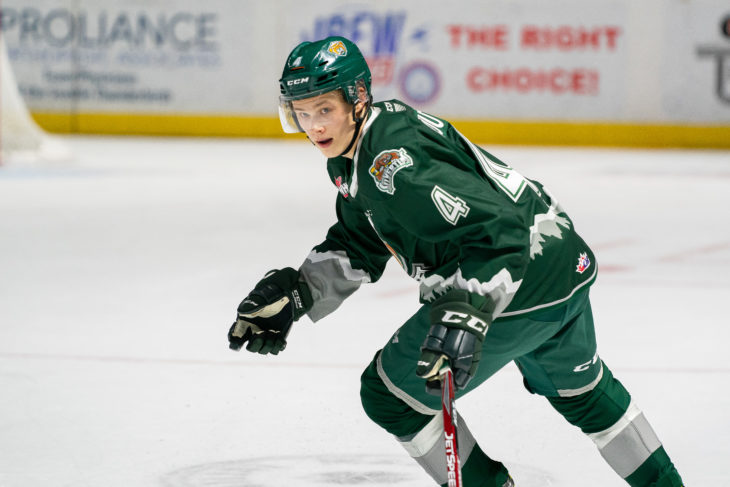 HOW HE EVOLVED: “I think I took a lot of steps in my first season in the WHL. I had a pretty rough start in Swifty. Still, I learned a lot from there too, and received good experience as a rookie in the WHL. But especially in Everett, I took a lot of steps forward, found my confidence, and really felt like I was helping the team. My two-way game improved, and I got to play in a lot of situations and with a lot of ice time. The coaches really helped me out along the way.”

“When I first got there and took time to adjust to the new team, I found my own game and confidence. I say after the first 10 games in Everett, I found my confidence and was really playing well – I was doing stuff better than before.”

“We were winning a lot, so I understood I could help my team win. The biggest thing when coaches put me on the ice, that makes me feel I’m trusted and playing well. They’re trusting me in a lot of tough, defensive shifts. If I can help my team score, good. But that’s not the main reason. If I’m good in the defensive zone and coaches are putting me in a lot, I feel that’s when I’m playing well.

I feel I’m pretty good using my stick, taking away passing lanes, making it really hard for opponents to create anything in the offensive zone.”

WHAT HE’S WORKING ON NEXT YEAR: “I need to stay healthy. If I can’t stay healthy it won’t be easy to get better. But I’m trying to live a lifestyle like a pro, 24/7: the way I eat, the way I sleep, the way I work. I still have a lot of work to do but if I enjoy doing that stuff, it’ll help me as a player. brother Konsta (26) is pretty strict and he’s taught and helped me a lot about nutrition. It’s not that you can’t ever eat candy, but during the week you have a lot of practices, so you have to eat healthy. I’m trying to do that, so I can get everything out of the workouts and practices.

“More like, consistently eating healthier and it’s not like I have made a big change in my meals. But just eating more veggies, fruits, and trying new foods that are vegetarian. They make my body feel good.”

“Coming back to Everett, I’m looking forward to coming back to the guys and everyone. I really have enjoyed my time there and we had a really special group. I can’t wait to make another year of memories with them. I want to win games and hopefully play playoffs like we did heading into March.”