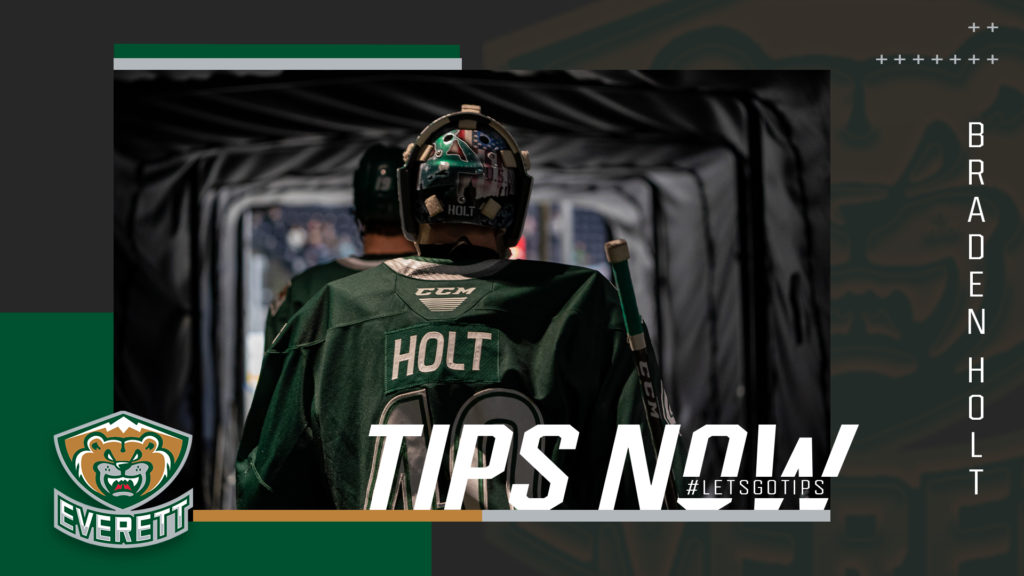 THE PLAYER: Braden Holt, a goaltender you may already associate with the greatest pneumonic device ever (add a “-by” to the end of his last name and you have a Washington Capitals superstar), ended his first WHL season with plenty of promise, and mileage ahead to fuel potential for a 6-foot-1 frame. As he’s in progress with filling out physically this summer, and perhaps with more room to grow upward past his current height, one season as a 2003-born netminder showed that with experience in the second half of the season, his numbers delivered potential.

For starters, the Bozeman, Montana native entered the season as part of a logjam in net. His running mate, CHL Goaltender of the Year Dustin Wolf, came off a career high 61 appearances as WHL Goalie of the Year runner up in 2018-19. Then, as insurance with Wolf potentially departing for Team USA in the middle of the season, the Tips acquired 6-foot-5 behemoth and previously heralded USA prospect Keegan Karki, short on experience but long on age to spell the gap in net if Wolf made the national squad. 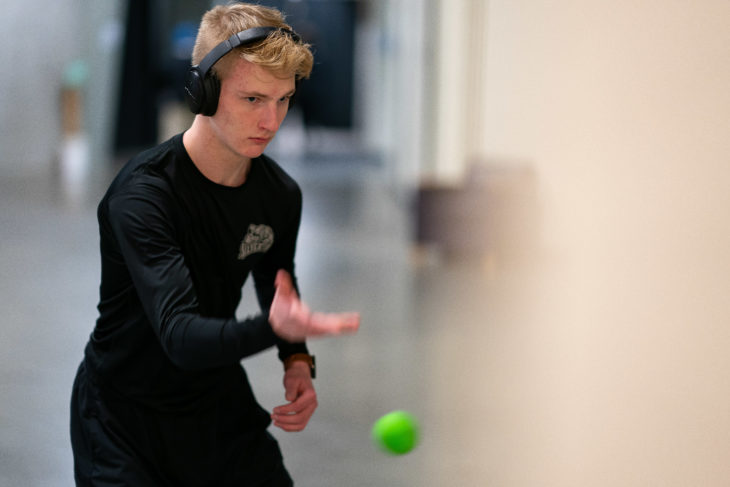 Karki earned the immediate backup job but a plot twist came a little after Christmas. With the Tips out to a shaky start against Prince George and trailing 3-1 in their first game back after the holidays on Dec. 27, Karki was relieved in net for Holt – backing up Karki with Wolf gone to the World Juniors – whose patience finally paid off. The Tips fell short, 4-3, but Holt sealed the leak early in the game, helped spur the Tips to tie the score, and didn’t allow a goal until Ilijah Colina’s winner at 2:34 of the third period. His consolation: third star of the game, 19 saves on 20 shots.

Karki would eventually be dealt to the Prince Albert Raiders shortly after New Year’s Day, clearing the deck for Holt to balance days off for Wolf with more time in net. His first career win came by avenging matters against Prince George: Jan. 4 in a 19 save effort at CN Centre. 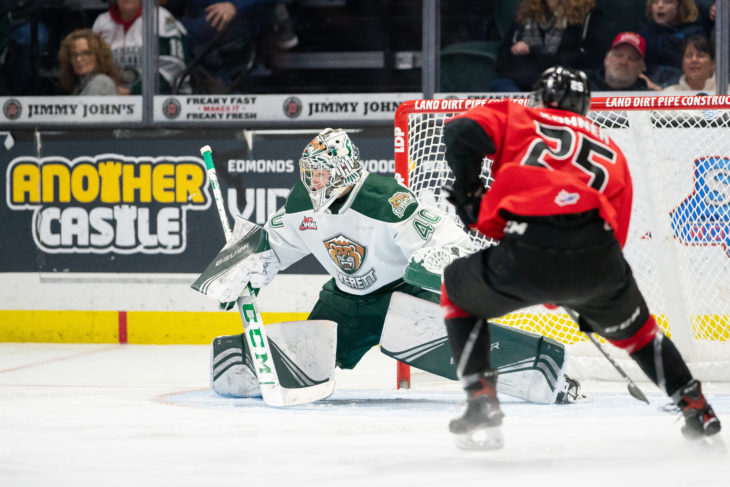 THE NUMBERS: Just eight appearances spelled Holt’s maiden season in Silvertips green, and made them count. Thriving with the upgrade in circumstances, Holt – who the Tips aggressively recruited deep into last summer – won his last three appearances of the season and capped it with his first career shutout, 16 saves at Tri-City on Mar. 6, shortly before the pandemic halted the season.

Once a Team USA selects camp invite, Holt blossomed after his first career win, furnishing a .934 save percentage and 4-0 record in his last six appearances, along with a microscopic 1.37 goals-against-average.

Holt paused for a few moments over the phone, after the morning regiment to reflect, and explain the groundwork ahead for 2020-21.

HOW HE EVOLVED: “I think it was a tough situation coming in, but going into the season made me mentally stronger. My will power went up and eventually I got time to see action between the pipes. I knew this was the right place to come play after my first training camp, and seeing the facility, coaching, records, and the best CHL goalie out there. There were a ton of great options but all around this is where I can develop the most.

I think my debut made me feel comfortable playing in the WHL, and it’s where I gained the most confidence knowing that’s where I belong. The fans of Everett made it feel pretty good. It was a great feeling after waiting to get in there.”

All season – every single time (Silvertips goaltending coach) James Jensen was on the ice, we got better every single day. Going against shooters like Bryce Kindopp, Wyatte Wylie, Jake Christiansen and more – you can’t complain getting those kind of shots. You take the advice of Jenner every single day.”

HIS BEST GAME OF THE YEAR: “I think my last game against Prince George – 4-2 win was my favorite and best – I got a lot of shots and opportunity to do what I can do. It was a really fun game to play in downtown Everett as well. I think right in warmups, the boys were pumping me up, I felt I was ready to go – also because my family was there, too.”

WHAT HE’S WORKING ON NEXT YEAR: “Getting better in all areas – in gym, flexibility, working with Wolfie in the summer. When you’re with him, you learn how to be a professional and treat the body right with nutrition. Regenerations after practice are huge – and it helps earn more playing time. Woflie’s helped me out quite a bit – he’s earned the best in the CHL and multiple awards by being a pro, eating right, re-gen, how to practice, how to treat yourself.”