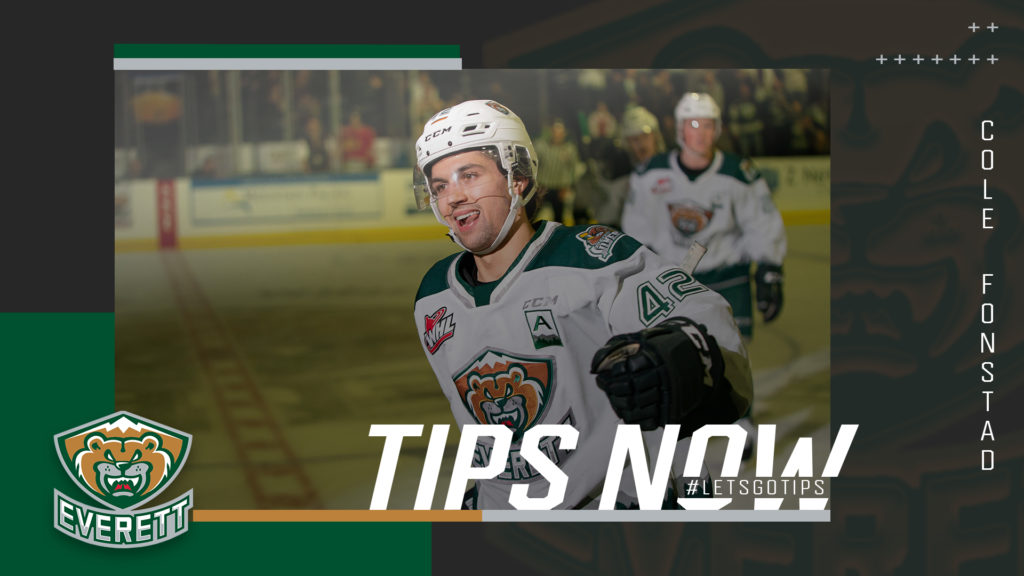 THE PLAYER: Cole Fonstad is a WHL champion.

Soon, preferably by the end of this next projected season, he’d like to add one more description to the brand of #42:

By way of numbers, he’s well on his way. The incoming fifth year WHL forward, who will max out his eligibility at the end of 2020-21, posted prodigious numbers once again for the third straight year. He narrowly edged his career high in points (74), while dishing 59 assists, tied for third in the entire league. 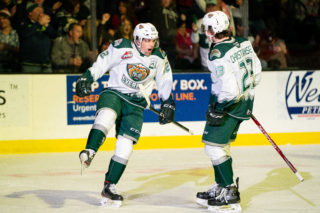 Quite simply, the Estevan, Saskatchewan native – on loaned to the Estevan Bruins of the Saskatchewan Junior Hockey League until the WHL returns – was all the Silvertips could have ever wanted.

But heading into this previous campaign, time was running short on locking up a contract as a Montreal Canadiens draft pick. His season also included a reset button in October, moved from the Prince Albert Raiders in an October blockbuster deal that sent Reece Vitelli and draft picks the other way.

Though time ran out on the Montreal window (he’s now a free agent), he earned a new lease on hockey life as a Silvertip, installed after the trade to fortify offensive depth and power play production on a program with a proven development track record. By the progress of the numbers outlined above, mission accomplished. 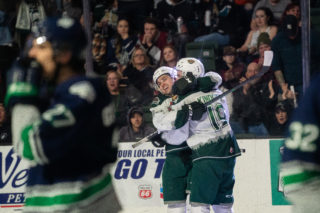 THE NUMBERS: Inside the overall points and power play totals was a demonstration of a seasoned and poised forward who just flat out made his teammates better. Bryce Kindopp improved on his career highs in goals (40) and points (74) despite getting in four less games. Gage Goncalves – the epitome of a breakout year – exploded from 1 goal in 2018-19 to 33 last season.

Fonstad delivered a +39 rating (a Silvertips leading +34 after he joined the team), five game winning goals, and 17 multi point games. Nine times he chipped in with a three point game or better.

And beginning Feb. 21, when the Tips went 11-1 to finish the regular season: he had a point in all but one game. 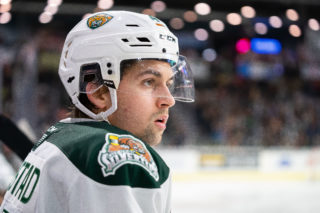 HOW HE EVOLVED: “My whole outlook on the game has changed. Ever since I went to Everett, working with (Dennis Williams) and the rest of the coaching staff, I added a lot of details in my game I didn’t know were missing when I got there. It was little video sessions and things they pointed out that didn’t seem big. But once you start doing them, you notice. Little details whether it’s winning one on one battles, good body position, knowing when to make the right play and holding back a bit. I improved on that last year.

How influential are those details to landing a potential NHL contract:

“I think it’s huge. I think as you go to upper level, you get less leash each time you go up. The room for mistakes get slimmer. Those details help you become a pro. Everyone up there can make plays and are skilled. The ones who have the better details and round out their game will be the ones who get the best shot.”

On the impact of his teammates: 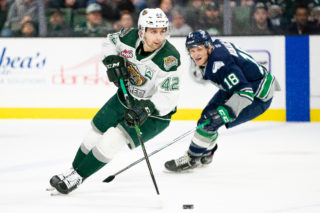 “When I came to Everett I didn’t know anyone. But we have a great group here. Whether it was an older or younger guy, everyone wanted to get better and that’s the big thing: everyone bought into what the coaches wanted to do and came to work each day. I played with (Gage Goncalves) and (Bryce Kindopp) most of the year, two unbelievable players. Bryce signed a contract and Gage as well. I was fortunate to play with them all year and we clicked well together.”

HIS BEST GAME OF THE YEAR: “That’s a tough one. The Medicine Hat game: everything just seemed to click and we had a big win against a team that was really hot at the time. I had a lot of family there because it was our trip, close to home. My cousins were there along with my auntie and uncle. That was a good one for me.”

WHAT HE’S WORKING ON NEXT YEAR: “Right now, playing in (Estevan), the big thing is being in shape and having my timing down once our season starts so I can hit the ground running (in the WHL). I just want to not build any bad habits and work on things – keep going hard in the gym and getting stronger. But just take advantage of the games I can get in right now, once we get to Everett I can hit the ground running and I’m in shape and ready to go.”

How much does that have influence on getting an NHL entry level contract?

“Yeah that’s my main goal in this last year. The reason everyone goes to the Western Hockey League is to eventually play pro hockey. That’s a huge goal of mine for this season and it’s going to be exciting.”

“(Our coaches) are unbelievable. I don’t think there’s a better staff in the league with how much they care and extra time they put in with developing players. Whether you’re an old or young guy, they’re always willing to do what you need and get what you need. If you buy into that and trust them, and what they believe in, it’s going to lead to success. The amount of (NHL and AHL) contracts signed over the last few years says a lot of the organization. I’m happy to be there and I think it’s going to give me a good opportunity having them behind me.”