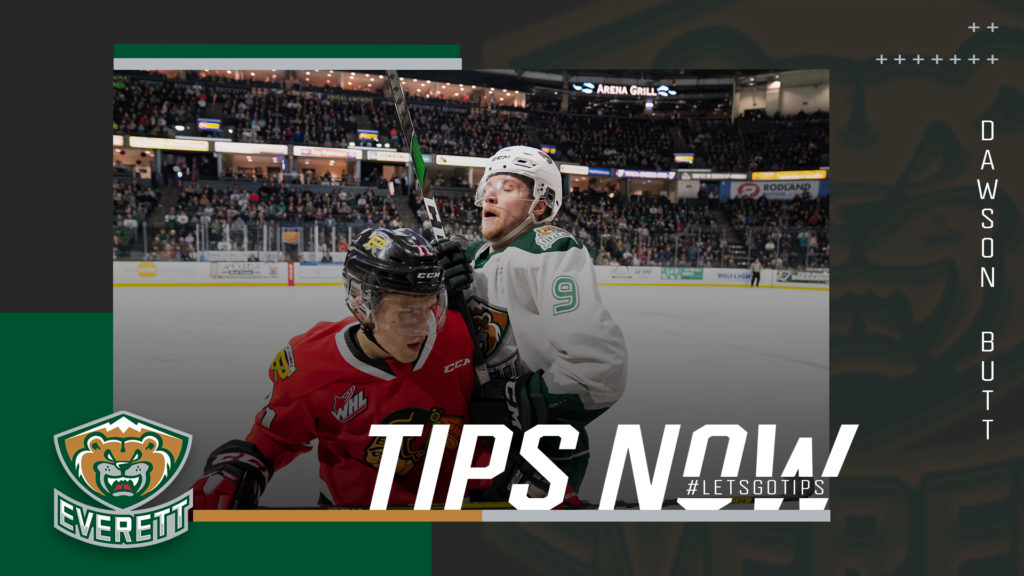 Driving in the car from Pierce County to Everett, Washington for an offseason conditioning skate (coming in November – how weird does it feel to read that?), Dawson Butt knows this is it, coming up on his final WHL eligible season. An incoming 20-year old category forward on a roster once again primed with talent, what he doesn’t know is perhaps what the next day – or even week will bring – in an upside down 2020 calendar year.

All he knows is the continued dedication to taking the next step as a hockey player will open doors: education package or professional hockey.

Butt, a Junior Silvertips alumnus who represents the evolution of the game in the Puget Sound, has three full seasons under his belt loaded with winning hockey. As a depth forward in his rookie year, the Silvertips came within two wins of hoisting the Ed Chynoweth Cup. His next year, the Tips won the U.S. Division.

Not too bad of an education on the process to victory.

THE NUMBERS: Butt passed his career highs in points (19) and assists (10) while notching nine goals, limited to just 51 games when he served a suspension during the middle of the season.

Coming back, he made a mark on the scoresheet, earning five points in his first four games back in the lineup, including a multi point outlet in a big mid-February win over Portland.

Butt’s signature game came on the ice before friends and family, Dec. 8 in Calgary. His three assists generated a Silvertips comeback down 3-1  late in the second period, and ended a long Central Division trip with a 6-3 win at the Saddledome. He had an apple on the eventual game winner, a blast by Jake Christiansen.

HOW HE EVOLVED: “I think I developed a lot with maturity – how to become a professional. (Silvertips head coach) Dennis Williams had some words that stuck with me for the rest of the year – “if you want to be a pro, act like a pro.” I have developed with my speed, conditioning, strength, overall strength on the puck and just knowing the game.”

“I was a younger kid coming into this league and wasn’t used to the speed of the league. My development with my skills, head, feet, hands, basically it’s all taken a big step ever since.” 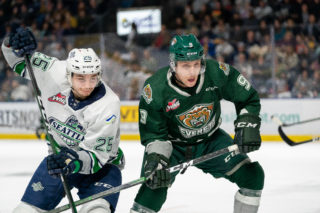 HIS BEST GAME OF THE YEAR: “Probably in Calgary where I had three assists in one game – I haven’t had a muti-point game since I was 14 when I was in the Seattle Junior program. What I remember most – the third assists –  I passed to (Martin Fasko-Rudas) and he jumped five feet in the air celebrating, it seemed like.

It was also special because it was in Calgary, where my family is originally from Edmonton and they don’t get to see me play much. So I got put in a good position to put on a show for them.”

WHAT HE’S WORKING ON NEXT YEAR: “I’m trying to work on leg power and I’ve been doing a lot more leg days more than in the offseason. Also my conditioning – because when I got suspended, all that I did was cardio. I came back and really, it helped with getting more points.”

“After the suspension, I learned more with playing my shifts, I have to be smarter with my emotions and keep disciplined. It was a positive thing. It showed me what I needed to do to be a better hockey player.”

As for what’s next after this next season?

“My goal is to make it as far as I can and be successful as I can. Whether that’s going to college or playing pro, all options are open.”