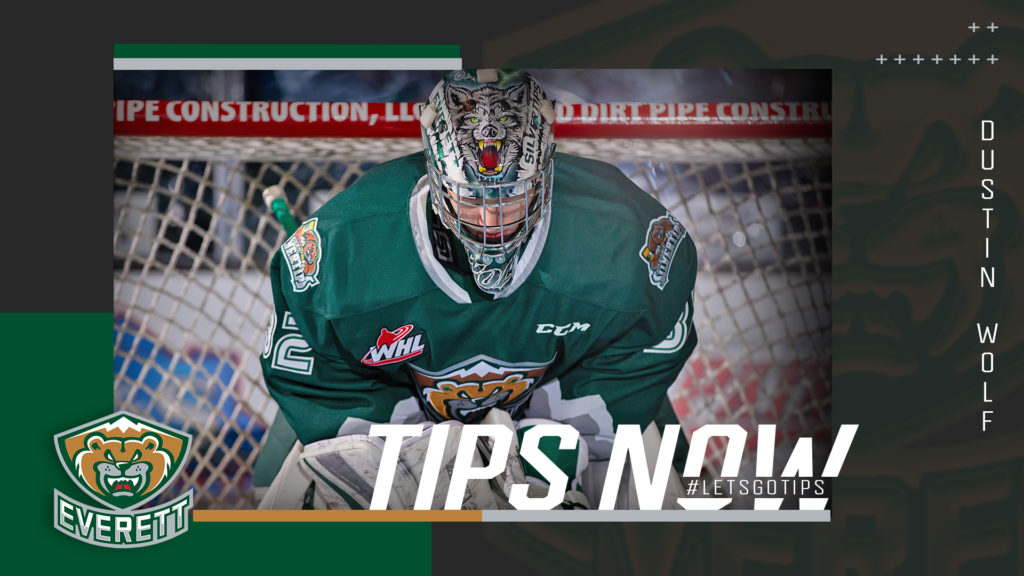 THE PLAYER: At this point, he needs little to no introduction.

Dustin Wolf has built a body of work across three seasons that would qualify as a Taj Mahal of goaltending greatness in the WHL. When Carter Hart graduated to the pros, eventually becoming the everyday starter in Philadelphia while helping ignite the Flyers run to Game 7 in the second round this year, there were whispers.

“What will become of the Silvertips?”

“Better enjoy this success now. Because you know, when Hart leaves ….”

“It’s only a matter of time before Everett bows out of contention and goes into rebuilding mode.” 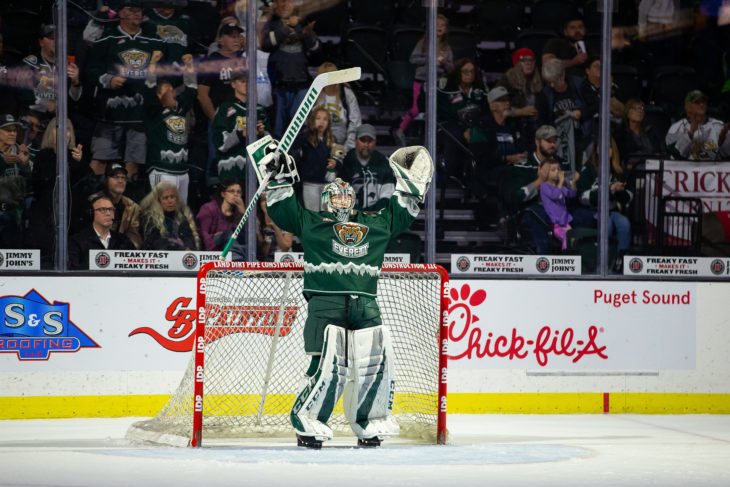 Then Wolf showed up.

As Wolf played protégé to Hart during the Tips run to the finals, the seat in the classroom proved very valuable as he seized the starting role the next season. The Tips won 47 more games, followed up with a league best 46 this past year.

Oh yeah, that talk about Wolf being “undersized” at 6-foot, 165 pounds? His CHL and USA Hockey’s Dave Petersen Goaltender of the Year awards comes under a year removed from being drafted by the Calgary Flames.

Simply put, Wolf has done more than taking the torch from Hart. He’s held it high.

As Wolf prepares for potentially, his final season in downtown Everett (though, he is eligible to return as a 20-year old), he’s making the attempt at staying a step ahead this summer. Though his full time residence remains in Lake Stevens with father, Mike and mother, Michelle, he’s elected to board with Stockton Heat (Calgary’s AHL affiliate) goaltending coach Thomas Speer safely during the pandemic in California, taking every available moment of ice time at Stockton’s Oak Park Ice Rink to upgrade his mechanics while preparing his own meals, and adjusting to fully grown, adult-like independence at Speer’s residence.

“Pasta’s an easy one,” said Wolf. “Throw marinara sauce in there, and then add some chicken. I’ve been trying to find good oatmeal recipes. Protein pancakes have been coming in clutch. There’s nothing too fancy yet but it’s a work in progress.

Whenever his graduation day comes for the pros, he’s made every effort to demonstrate full progress.

NUMBERS: The leader in virtually every major statistical goaltending category, or close – wins (tied for 1st), shutouts, save percentage, and goals-against-average. He was named Silvertips co-Most Valuable Player and twice was named WHL Vaughn Goaltender of the Month. His nine shutouts tied Carter Hart (2016-17) for third in Tips single season history, his .935 save percentage is third highest, and his 35 wins tied Hart (2015-16) for third.

He needs seven shutouts to break the Silvertips and WHL shutout record (26, Hart and Tyson Sexsmith of Vancouver).

A cherry on top in a season cut too short by the pandemic: his save on Ryan Hughes of Kamloops also was voted by the fans as CHL Play of the Year.

HOW HE EVOLVED: “Year after year there’s continuous improvement taking place. My first year had a lot of learning curves. Over my last two seasons as a starter, there was a lot of experience to be gained. You look at different scenarios and you gain more knowledge. I’m working on gaining more knowledge of being a pro, putting the work in so when it comes time to play, you’re mentally and physically prepared to put your best foot forward every night. There’s been major improvements along the way and hopefully more in the upcoming season.

“There’s just so much fine details that go unnoticed (in the position). Being around Thomas Speer this summer in Stockton, it’s different knowledge from other coaches. Similar, but at the same time, they have different terminology. Just finding sightlines through pucks, finding things you’ve struggled in the past to work on, super fine details and more – everyone knows how to stop pucks. But it’s the fine details that help in the scenarios when you don’t stop them. Hopefully we’re able to showcase that when the season is able to start.”

“Being with (Silvertips goaltending coach James Jensen) for over ten years, we’ve developed a great relationship. He’s always doing research on what guys are doing now in the NHL and he’s a good friend with Lyle Mast – they’re always communicating different ideas circulated in the NHL. Being around Speer for past three months, you see how he’s been through USA Hockey and now with Stockton – there’s a lot of different areas that are looked at. Being only with “Jenner” my whole career, it’s good to find different things to work on – new drills to take back and being able to work on them.

HIS BEST GAME OF THE YEAR: “The Medicine Hat game (41 save shutout in a Dec. 7 win on the road). It was an unorthodox weekend being able to have that tremendous game in Med Hat, then going into Calgary next night (for another victory) was awesome. There were a couple Calgary staffers in the stands too – just to show what I can do out there and give them a good game to watch.”

WHAT HE’S WORKING ON NEXT YEAR: “Just continuing to improve my game, on ice and off ice. Learning to be independent, being away from home for a few months and doing everything on your own is different. It’s preparing me for a couple years away here in Stockton. Moving forward, I want to continue to be the best in league and I want to repeat as goalie of the year. There’s lots of big accomplishments to pursue, but as long as season starts, it’s a good shot at doing what I do best.”