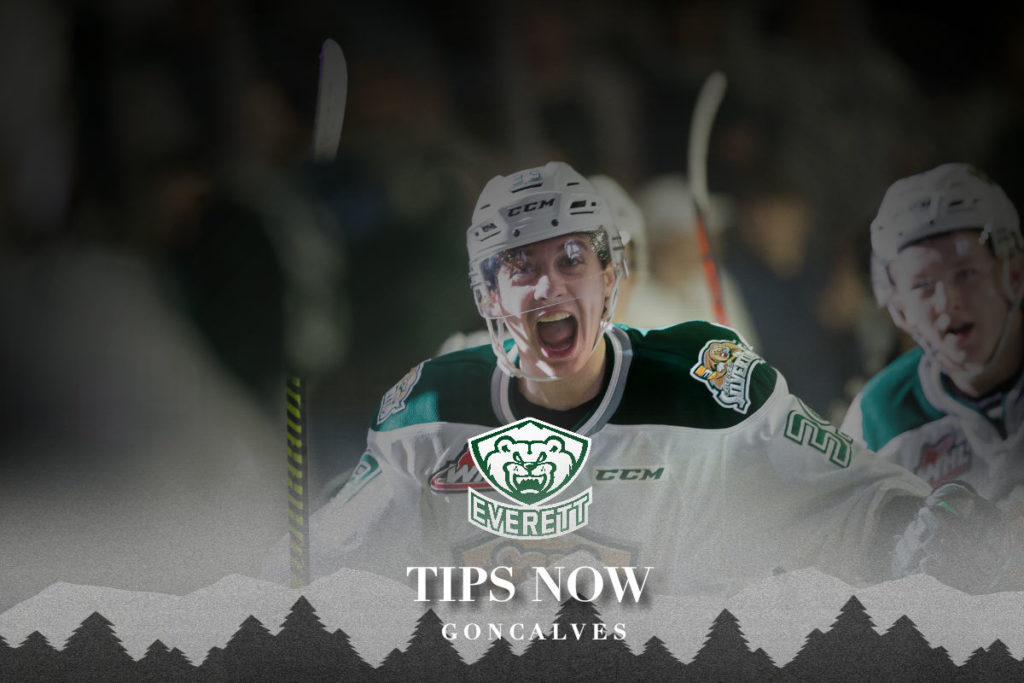 Continuing a look at Silvertips players slated to return, Gage Goncalves will prepare for his second full season in the WHL. With question marks surround the Silvertips and depth about one year ago, Goncalves took advantage of several openings to elevate himself into a larger role, bigger minutes, and opportunities to score timely goals.

Big progress, considering he entered training camp two years ago as a pure undrafted invite. Then, at points of last season, he was finding himself on lines with some heavy hitter veterans: Connor Dewar and Bryce Kindopp.

With a smile and personality that can light up a room and fit in well with a tight-knit Silvertips team that captured their third straight U.S. Division title last season, Goncalves is looking for more in 2019-20.

THE NUMBERS:  After finishing his campaign two years ago with the Fraser Valley Thunderbirds as an offensive dynamo, he turned plenty of heads in his first full season with the Silvertips, tallying 14 assists and scored his first WHL goal. He went on to score a pair of goals with four assists in 10 games during the 2018-19 playoffs, further cementing his progress as a reliable figure in the lineup.

Comments, from the man himself:

HOW HE EVOLVED:
“I want to build defensive trust, keeping my game simple to try and stay in the lineup consistently.  This year was another pace, more skill from last year.  Everyone had their own roles and I bought into fourth line, “grinder role.”

HIS BEST GAME OF THE YEAR:
“The three assist night at home (Feb. 2, a 7-2 blowout win against Seattle).  The puck was just following me around and I got some nice bounces for the team.”

WHAT HE’S WORKING ON NEXT YEAR:
“Earning the coach’s trust.  Getting more involved in the power play and penalty kill to get more ice time.  Next year I want to bring in more of an offensive minded game.  Playing with (Connor) Dewar and (Bryce) Kindopp; their speed and ability pushed me to keep up with them.  The playoffs taught me how to play against other team’s top defensive pairings.”