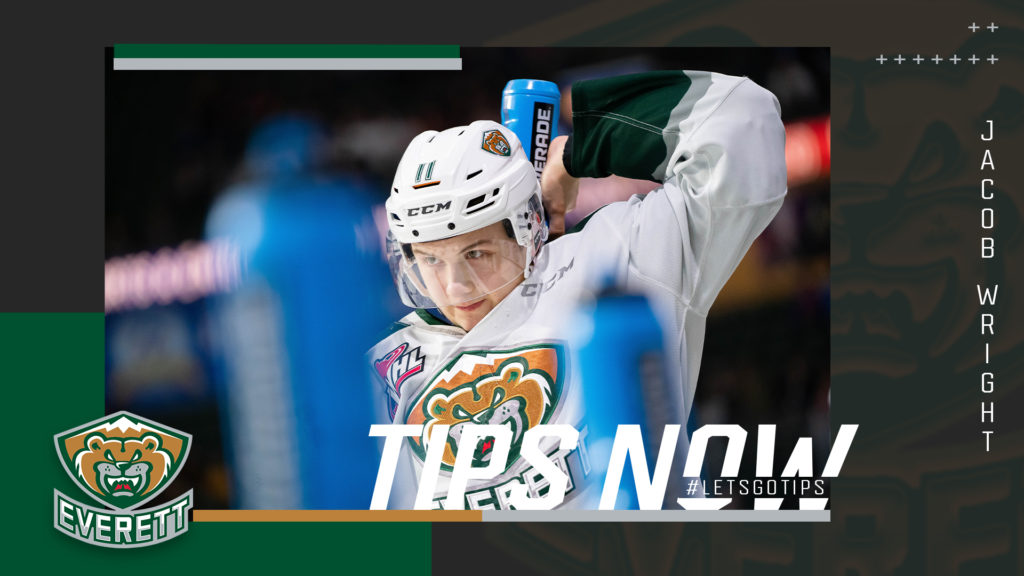 Jacob Wright’s journey through his 2019-20 season was boilerplate compared to the common first year forward: a path filled with opportunities, obstacles, growth challenges, and a catharsis.

Evolving out of the Fraser Valley Thunderbirds program – a springboard for a familiar, blossoming Silvertip in Gage Goncalves – Wright entered year one armed with a marksman shot, offensive credentials – but also a clean slate. Adding to it, the Silvertips were well-oiled with seasoned point producers like Bryce Kindopp, Cole Fonstad, and more. Goncalves took the fast track to first line duty, and players such as second year forward Jackson Berezowski took the next step.

Simply put, the Tips were loaded, and there’s only so much ice time to go around.

Wright, still training in Vancouver and in the same building as Goncalves, took it in stride. In addition to spending ample time after practices to work on creating open ice, he used the power of observation – a tried and true method for development – as an asset to his growth.

NUMBERS: Indeed – Wright took the opportunities for ice time in stride, missing only 14 games while finding opportunities for his first three goals of his career and a +15 rating. The one he’ll never forget – his first career WHL goal – came in just his fourth game of his career. In the Silvertips 4-3 win over a pesky Spokane squad, Wright extinguished a one goal lead for Spokane with 5:36 left in the second period, when the Tips used the power of depth on their way to a comeback win (Brendan Lee also scored his first career goal that night).

Twice – he logged multi point games and made a difference arguably when the Silvertips were at their hottest point of the year, shortly before the pandemic’s pause on the season. A two-assist output sparked the Silvertips 6-0 blowout victory over the Tri-City Americans on March 6, when the Tips pumped 59 shots on net for their season-best 11th straight victory (they would stop the season 12-1-0 in the final 13 games

HOW HE EVOLVED: “Yeah, the first year was big, I was learning a lot of new things – the speed of the game, how fast everyone is, and how well each team is structured. You learn a lot getting use to the league in your first year, and next year I want to be an impact player. I want to make an impact on the game.

“I learned that as a smaller guy, I had to use my speed to my advantage. I had to learn different ways to skate out of the corner. (Silvertips assistant coach Mike) Lysyj helped with that after practice and extra stuff to help better my game. You always want to find the open ice and get open.”

If there was one player, he observed who made that big jump?

“Probably Gage (Goncalves) – because I played with him over the years (with Fraser Valley) and being able to play last year, year one to years two, it’s such a big jump in production and ice time: it was impressive. You can tell as the season went on, his confidence grew. He was a key player for us last year.”

HIS BEST GAME OF THE YEAR: “Probably we were at home against Tri-City (on March 6 in the Silvertips 6-0 win). I just felt I was playing a fast game, kept my feet moving, and made plays without second guessing myself. Everything was instinct, and things were flowing well that game.”

WHAT HE’S WORKING ON NEXT YEAR: “Just doing a lot of workouts, and getting bigger, faster, and stronger. You can always work on everything. There’s always something you can work on. There’s nothing to suggest you’re perfect. Being able to shoot pucks at home on my free time – I’ll be happy to do that. I’m stickhandling to make the most of workouts, about an hour per day.”

“Usually my workouts on ice average three to four times per week and I have a home gym – sometimes I’ll do two workouts per day. I have a rack of weights, squats, bench, treadmill and a box I can jump onto – a bunch of free weights. I have a pretty good set up in there.”

“For training camp, I’m looking forward to seeing (Silvertips billet) Parker Fowlds. I can’t wait to see how he’s doing; I haven’t seen him in a while. Maybe I’ll go for one of his good old’ lunches – check up on him, see how he’s doing.”