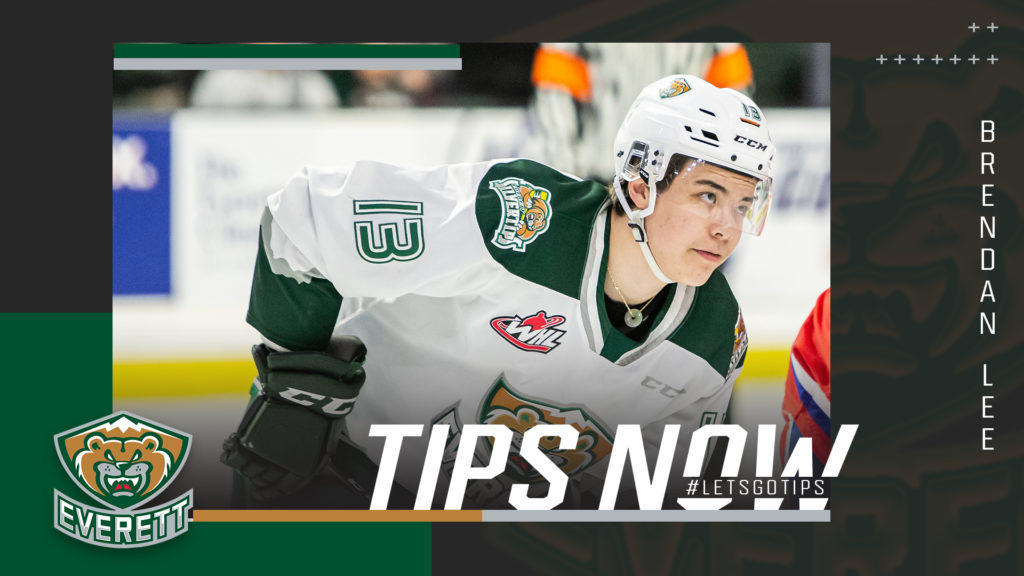 THE PLAYER: When Brendan Lee arrived on the Everett Silvertips radar before the 2019-20 season, the potential to sign the next link in the franchise’s future didn’t draw exclusive excitement for his numbers.

As a native of Seattle who grew up in the Capitol Hill neighborhood and frequented Silvertips games in the Zack Dailey / Ryan Murray days, he blossomed into another testimony of the growth of the game in the Puget Sound. Once cheering for the Silvertips in a crisp jersey and helping sell 50/50 tickets from behind the glass, his life turned to opportunity on the other side of the glass.

Please allow us to bless your timeline with a young Brendan Lee at the very first #PinkTheRink #tbt pic.twitter.com/BdPfQoRZ0K

Four NCAA Division-I programs recruited Lee as a member of the Colorado Thunderbirds development program last year, but as he returned to his home region, the sights and sounds of downtown Everett and the invitation to be installed into a lineup that would go onto win a WHL high 46 games was too good to pass up.

What the Silvertips locked up in Lee: a forward showing no fear with the puck, a deft touch in the offensive zone, and a sniper’s mentality. As his education of details increased, so did his ice time, and he scored two goals in the last two Silvertips home games before the season’s pause from the pandemic. Essentially, his brand as a lights out goal scorer in his younger days opened the door of WHL opportunity. Now, the mission remains to maintain that brand of play, with all the nuances that fit a WHL veteran.

Since the pause, Lee spent a few weeks in Seattle before flying out for the summer to Dallas, Texas, where the weight room and personal trainer Nate Henry have helped him gain muscle weight, and (socially distant) ice has delivered opportunities to skate with Wyatte Wylie, Cross Hanas of Portland, and Edmonton Oilers defenseman Caleb Jones (also, a WHL alum).

NUMBERS: Getting on the board, any given night as a WHL rookie is hard. Lee did it nine times, including a jaw-dropping snap shot off the rush in Victoria for his first career goal, perhaps providing a glimpse of the future. But as his game hardened, so did other opportunities to contribute, and Lee wound up playing in 54 games, along with a +5 rating to go with nine goals.

Where the revelation came for his potential to contribute: a humongous goal to help rally the Silvertips out of a 2-0 hole against Portland, with first place in the U.S. Division on the line, on Jan. 31 (the Silvertips capitalized to take – at that point of the season – their biggest win of the year, 4-3 in downtown Everett).

HOW HE EVOLVED: “Definitely a huge improvement compared to a year ago, where I’ve been learning new details in how to succeed at this level. Being surrounded with players like Wyatte Wylie, learning how to be a pro, and being on such a great team with depth was a great thing to be around.”

“Obviously I was used to a role in the number one spot to score goals and get the game winner. And being in that (new) spot as a rookie here, everyone goes through it. I was glad to be on such a great team and learn from a lot of people. It taught me how to be a better teammate, pushing teammates to be better, and trying to grab everything in how to be a better player. Especially with Wyatte, you learn to always ask questions.”

HIS BEST GAME OF THE YEAR: “For me it was the Portland game. It was a big one for us and I remember that (Jalen Price) passed one to me in the slot and I banged in the one timer.”

WHAT HE’S WORKING ON NEXT YEAR: “I definitely want to have a huge year and have been training hard. I still have four more months to get better. Roles change every year. I want to come in this year like (Gage Goncalves) – like that rookie year he had, with a huge season. He put up points, helped team offensively and defensively, and wanted to make a bigger impact and have a huge year.”

“Right now I’m working on just getting bigger, faster, and stronger, I’ve improved so much with training here in Texas. I just wanted to be further ahead than usual and strengthen up to avoid getting bumped off the puck and try to get faster when I am backchecking, forechecking, and moving up ice.”