TIPS NOW // The Bear Is Ready To Pounce 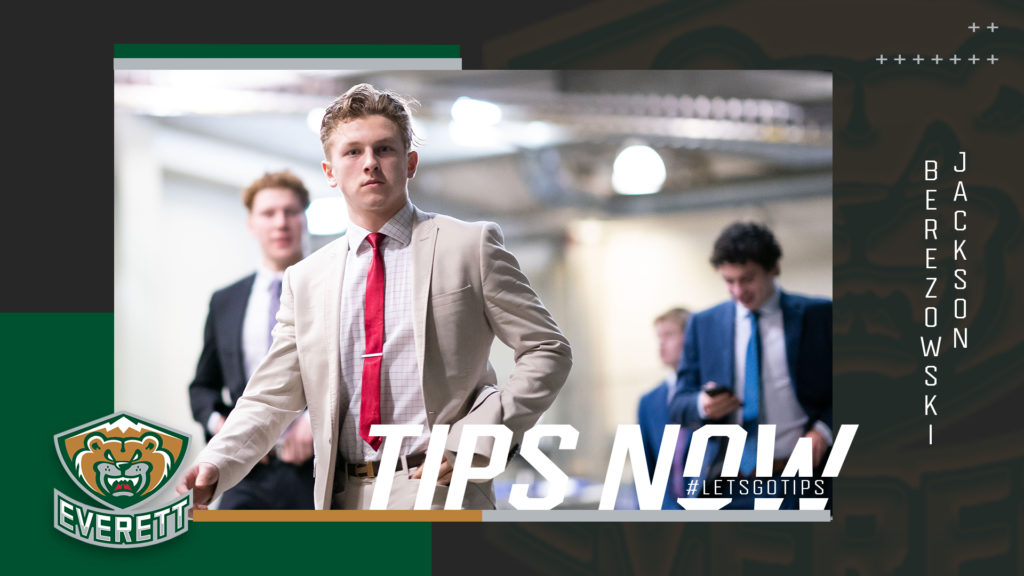 THE PLAYER: With year two in the rear view mirror, though with an abrupt ending, the third year represents a fork in the road for many Western Hockey League players. Some will experience the surge of a rocket ship from take-off, often fueled by a shot of confidence and growth following a selection in the NHL Entry Draft.

Others may take a while to fully bloom (see: Bryce Kindopp, Connor Dewar, Shane Harper) to reach full preparation for the professional level.

While Jackson Berezowski’s numbers – 18 goals and 36 points in 61 games – didn’t grab NHL Central Scouting attention by the final pre-draft count, they are far from paltry. His production was felt in numerous on-ice situations (goals, nearly doubled and points, more than doubled from his rookie year). His work ethic – the most commonly embraced quality that doesn’t reach a stat sheet metric – is widely respected across the dressing room.

Time and time again, he found ice time as a young, developing Silvertip among a wide range of veterans who helped rip off a league high 46 wins before the pandemic began. 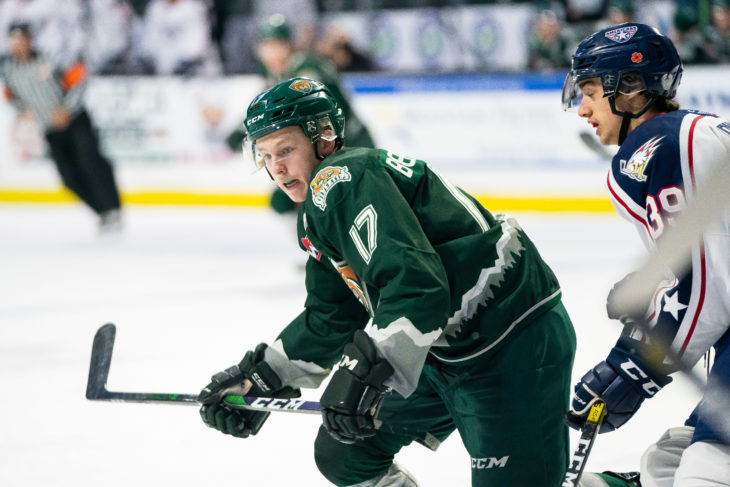 The Yorkton, Saskatchewan native, effectively nicknamed “Bear,” is now taking what could be the next big step in his career, with year three right around the corner. When it begins? The target is early December. It means he faces a potential stretch of nine months of downtime – to focus, train, and reorganize.

NUMBERS: As Berezowski’s surface numbers above suggest improvement, additional metrics suggest high value in the Silvertips lineup with still a long path ahead in his development and potential. In four less games than his rookie season, he improved by a +10 rating, sniped eight power play goals (third on the Silvertips behind Bryce Kindopp and Gage Goncalves), earned six game winners, and ripped off 132 shots on net – in the top 10 where plenty of talent and budding age made a bid for ice time.

In a Silvertips 8-0 blowout of Seattle on Jan. 18 in downtown Everett, a four point night for Berezowski spelled his career high – a night where he admitted, everything “clicked.”

He spoke in between on ice sessions, serving as a youth coach in Saskatchewan, on what lies ahead, and what designed his 2019-20 campaign:

HOW HE EVOLVED: “Different season for me. It was nice getting into a bigger role and earning that trust from year one to year two from (Silvertips head coach Dennis Williams) and the coaching staff. It really helped a lot.

The role I embraced was being an all-around guy I guess.  I was on special teams both sides. It was nice to be put in all situations – either to shut down the opposing team last couple minutes – or on ice needing to get that goal last two minutes to tie it. But knowing I could be counted on in any situation like that was great.

“The most important thing I heard from the coaches: just being consistent – don’t take any nights off – you can’t have a good game and follow it up with a bad game – he wants consistency out of me and out group too.”

HIS BEST GAME OF THE YEAR: “I think was the Seattle game – not so much I got a couple points, but everything was clicking. We beat them 8-0 and I think it was just my legs were going, proving I was playing in all roles, even four on four. Coach was comfortable putting me in those situations.”

WHAT HE’S WORKING ON NEXT YEAR: “Obviously it wasn’t ideal at the start of the pandemic – we didn’t know what to expect. We kind of had to rethink our whole training situation because we were planning on coming back October. Now that it’s pushed back, not only do we want our bodies in shape, but we want to be at our peak performance, in November and December.”

“This year my focus is on a lot of my lower body. I want to be a faster guy, and just lengthen out my stride. I discussed that with coaching staff. A big focus, a lot of it, is getting bigger, faster and stronger. Being a small guy, you’ve got be faster especially in the corners.”