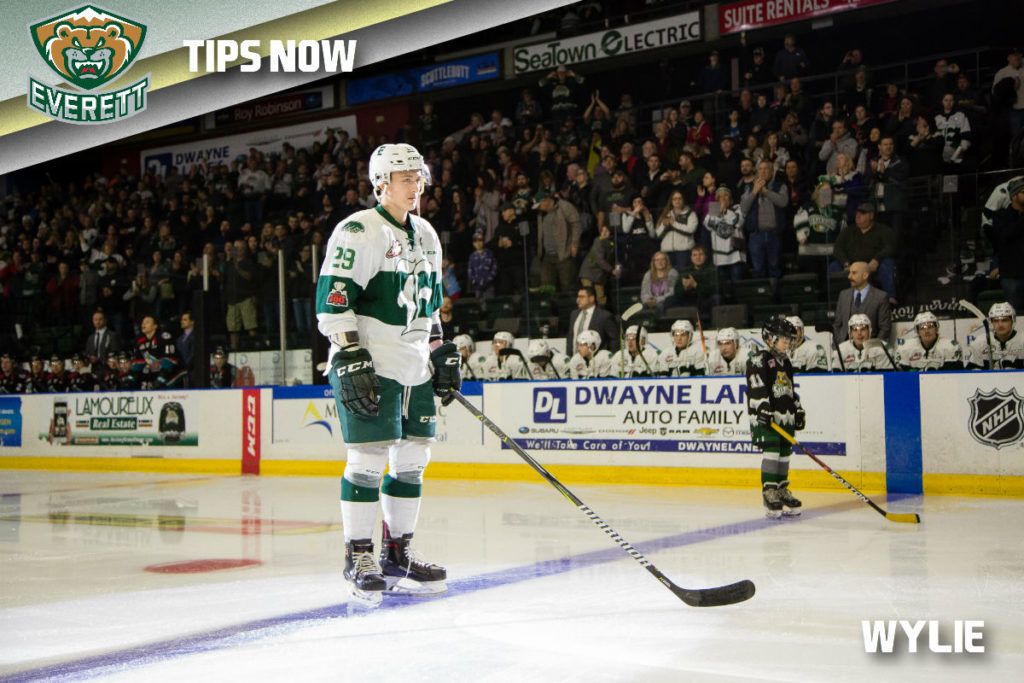 It started 15 years ago.

The fruits of their labor are paying off, even for one participant who goes back to its infancy.

With the 128th pick of the sixth round in the 2014 WHL Bantam Draft, the Everett Silvertips selected a hometown player for the first time ever: Wyatte Wylie, a 1999-born Everett native—the first of his kind. The current Silvertips defenseman played his first season with EYH at age seven and hasn’t looked back since.

As if breaking into the WHL and thriving under a franchise he so admired growing up was not a great enough feat, the 6’01, 190-pound right shooter ranked No. 71 among North American skaters in the NHL Central Scouting Service’s final pre-draft rankings. This is a massive jump from No. 179, where he was originally placed. This jump leaves the chance of Wylie being drafted in Dallas on June 22-23 within reach.

Wylie, 18 (late 1999 birth year), just had a commendable second season with the Tips where his hard work and growth as a player was made clear as day. He had six goals and 25 assists in the regular season, racking up 31 points and a rating of +12. The heat continued into the playoffs, where he had an additional eight points (2g, 6a). Former teammate and Everett Silvertips captain Matt Fonteyne believes Wylie indefinitely deserves the rank he has been given in his first year of NHL draft eligibility, describing him as a guy on a mission.

“Ever since the start of last year, he has continuously gotten more confident in his game and was a huge key to our success,” said Fonteyne. “It’s no surprise his draft stock has really skyrocketed since the start of the season.”

Wylie’s impact on the ice was extremely prevalent two times in particular this past season. While his game-winning goal in game four of the second round against Portland lit up the bench and helped push his team to the end of the series, it was an overtime assist to forward Connor Dewar that reflected the type of player Wylie is.

After scoring twice in a breakout game against Spokane in January, he helped launch his team back from a 5-3 deficit and force OT. With 3:50 left in overtime, Wylie made his way into the Spokane zone—positioned in a way where the most young players would pull the trigger and shoot for a hat trick. Instead of shooting to hit a new career milestone, Wylie remained articulate, executing a perfect pass across the net to Dewar who scored the game-winning goal.

“I saw the other opportunity to end the game and I went for it,” said Wylie. “I knew I couldn’t miss an opportunity for my team Connor was wide open.”

This attitude of reliability and determination is very much reflected in the way Wylie plays and will indefinitely help shape his future. Dewar believes his attention to the little things is what will continue to drive him forward.

“Wyatte is a detailed guy through and through,” said Dewar, “in the gym and through the winter. He is a leader in weight room—people look to him for an example. He came to the league a year later than the other guys in his age bracket, but his desire to get better quickly got him up to their level, and in some cases even past them.”

With the NHL Draft only a week and a half away, Wylie says he is going into it with an open mind.

“If any team wants me, that would be more than a dream come true. For now I’m just going to keep working and stay true to myself and see what happens.”

Regardless of what his status is after the draft, this hometown boy’s future is undoubtedly bright. Wylie will be back for his third season with Everett in the fall, and Silvertip Country is ready to see him shine.