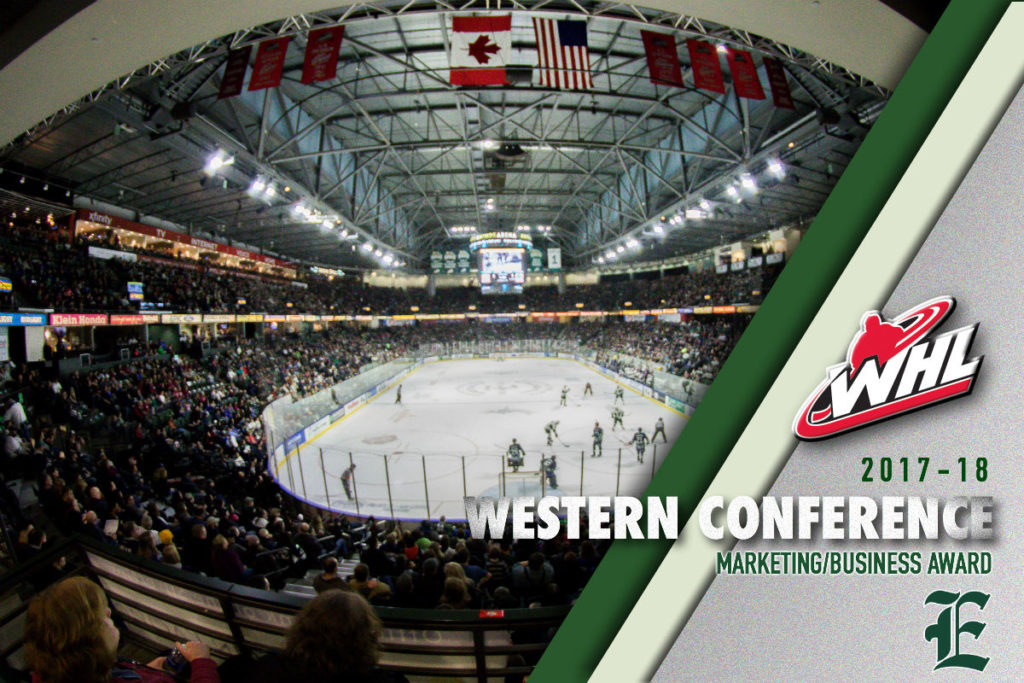 “The Everett Silvertips are honored to be recognized by the WHL as recipient of the Western Conference WHL Marketing and Business Award,” said Zoran Rajcic, COO of Consolidated Sports Holdings International. “This recognition wouldn’t be possible without so many talented and dedicated individuals who serve our organization, but more importantly are geared to serve our fans and the communities of Snohomish County. Every one of our staff members who serve in sales, operations, marketing, and broadcasting deserve many thanks for their hard work. It’s our mission every season to deliver a top notch experience for everyone who crosses the turnstiles of our home venue in downtown Everett, and follows us in between game nights, and it fuels us to continuously explore greater heights in enhancing our product.”

Enjoying extensive growth in all major business categories in 2017-18, the Silvertips drew 184,661 fans to downtown Everett’s Angel of the Winds Arena, their largest turnout at the turnstiles since the 2011-12 season. The Tips drew sellout crowds of 8,149 or more within the final month of the regular season.

As an innovator in game-night promotions, presentation and community involvement, the Silvertips have executed a number of successful campaigns during the 2017-18 season. Over the course of the season, the Silvertips have visited more than 30 schools around the Pacific Northwest, delivering messaging on anti-bullying, healthy lifestyles and education. The team has also spent time working with cancer patients at the Providence Regional Medical Center, as well as visiting the hospital’s Pavilion for Women and Children to distribute plush toys following another successful Teddy Bear Toss.

A key event within the Silvertips 2017-18 calendar was Local Heroes Night presented by Wolfe Plumbing and Wolfe Fire Protection. More than $15,000 was raised to benefit the Snohomish County Law Enforcement Memorial Fund and the Medic One Foundation. Another successful Pink The Rink event presented by Safeway Foundation and Providence General Foundation sserved to help raise $88,000 to fund free mammograms and cancer care for women in Snohomish County.

With an active, engaging and unique approach to social media, the Silvertips have also been able to create awareness of the WHL and the Silvertips brand. The Silvertips official Twitter account, @WHLSilvertips, experienced a growth rate of 35% in followers and 56,000 in engagement interactions over the last calendar year. Additionally, the Silvertips took extra steps to upgrade their WHL Live production to high definition during the 2017-18 season, synchronized with Silvertips radio coverage on KRKO 1380 AM / FM 95.3, powered by 50,000 watts throughout the Pacific Northwest region.

The Edmonton Oil Kings were named the Eastern Conference recipient of the award.

The Silvertips will aim for a 3-1 series lead in the second round of the WHL Playoffs on Thursday at Moda Center, when they visit the Portland Winterhawks at 7:00 p.m. (Fox Sports 1380 / WHL Live) for Game 4. Tickets for Game 5 on Friday in downtown Everett are still available at http://everettsilvertips.com/playoffs. Doors will open at 6:00 p.m.