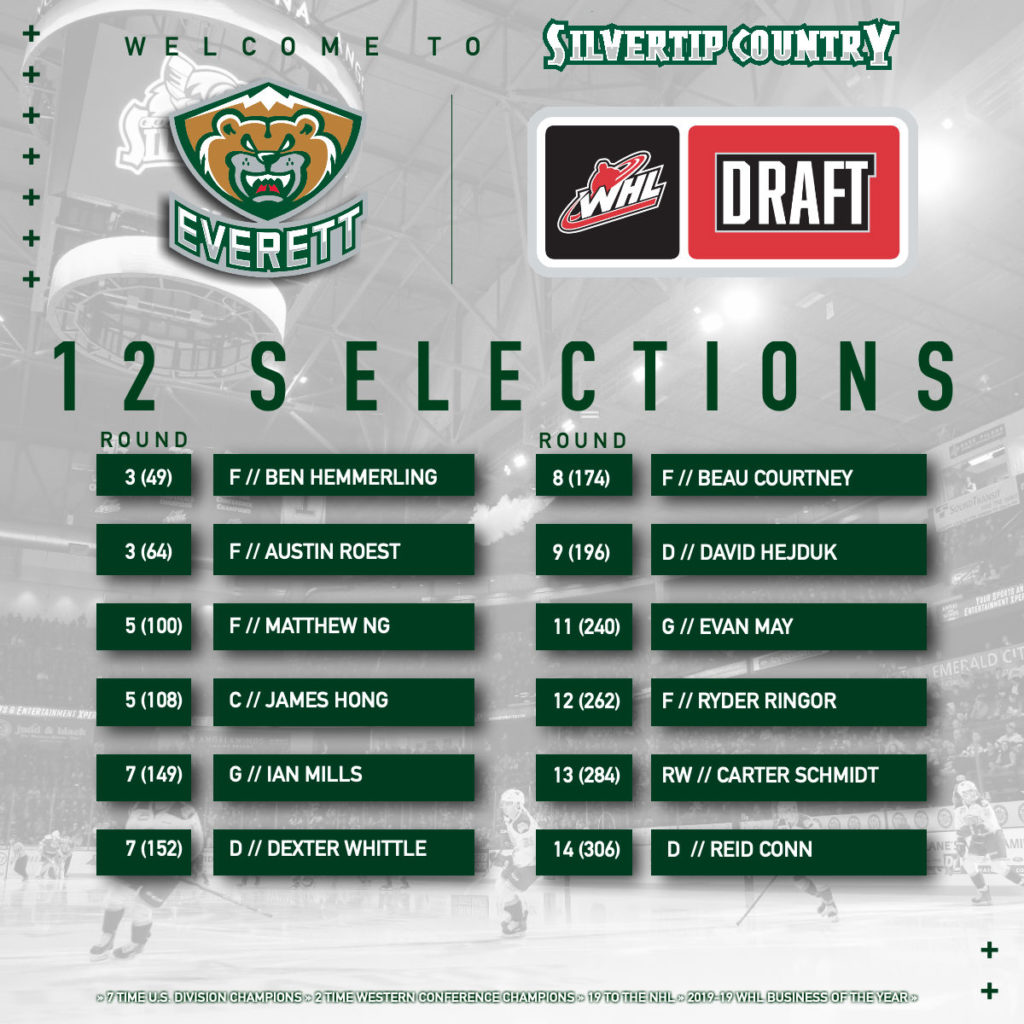 “Our approach at the draft continues to pursue natural ability which leaves us satisfied with this year’s individuals who have great potential to make an impact in a Silvertips jersey,” said Davidson. “This year we emphasized a heavier load of skilled forwards, and we’re excited about the potential from our defensive and goaltending prospects. It’s a product of the hard work from head scout Mike Fraser, director of player personnel Alvin Backus, and our entire scouting staff. We’re looking forward to welcoming our draft class to downtown Everett and educating them on the benefits of playing in the Western Hockey League and in front of our tremendous fan base.”

“A core ingredient of our organization is talent, and we stayed with that focus for this year’s draft class,” said Fraser. “We placed emphasis up front this year to acquire skilled forwards and we definitely walked away from today confident of the potential in that category for future Silvertips. It was surprising at a few picks that landed in our path, but that opportunity to add them to our organization enhanced our level of satisfaction from today. Overall, we’re excited and looking forward to seeing our prospects in downtown Everett very soon.”

With their first selection in the draft coming in the third round (49th overall), the Silvertips selected forward Ben Hemmerling from the Northern Alberta Xtreme Bantam Prep (CSSBHL). The native of Sherwood Park, Alberta led the program in assists (42) while ranking second on the team with 53 points (11g-42a) in 30 games. Hemmerling additionally tallied seven points (2g-5a) in five playoff games, ranking third among the team in postseason points and tied the team’s lead in playoff assists.

NHL BLOODLINES: Hejduk’s father, Milan, was a part of two Stanley Cup championship teams with the Colorado Avalanche and his #23 is retired by the organization … Roest’s father, Stacy, skated for four full seasons in the WHL with Medicine Hat (1991-95) and then suited up for four full NHL seasons with the Detroit Red Wings and Minnesota Wild.

Congratulations to #NAX forward @Hemmer_9 on being selected in the 3rd round, 49th overall by the @WHLsilvertips in the 2019 @TheWHL Bantam Draft pic.twitter.com/JWu44DvNom

Honoured to have been selected by the @WHLsilvertips in the Bantam Draft! Thank you to my Coach @mattstang7 for puching me and to all of my teammates! Thank you to the Silvertips for picking me! Great Organization!! pic.twitter.com/95smssGM37

Tips get forward Matthew Ng out of the @SanJoseJrSharks program in the 5th round.

Leading point getter on the bantam program, and always: a potentially terrific testimony about the game's sunbelt growth. @WHLsilvertips

Congrats to my Billet Brother @_Carterschmidt on getting drafted today! Kids gonna be a player!! @WHLsilvertips

Very honoured to be selected by the @WHLsilvertips , thanks to everyone who has helped me along the way, can’t wait to see what the future holds! https://t.co/qAYfkA6isI