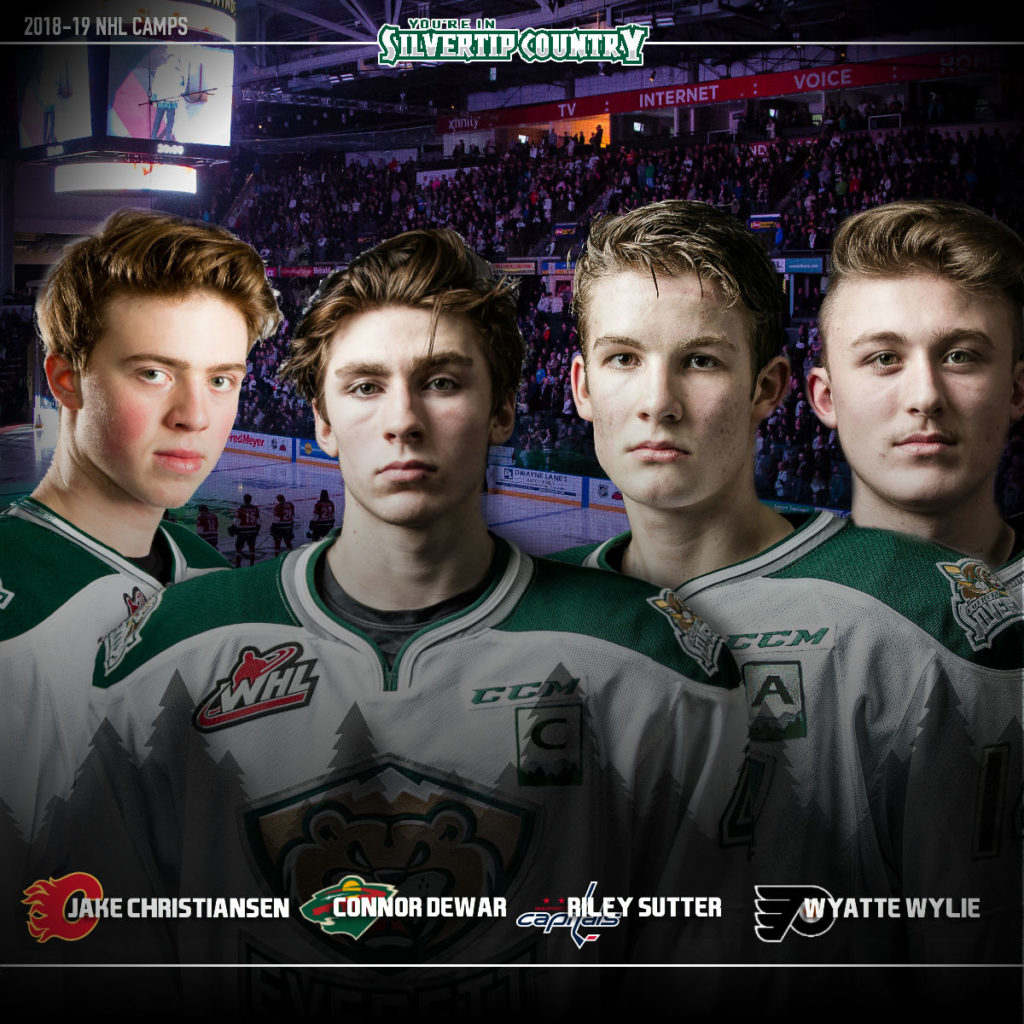 The quartet of Silvertips players will skate in camps for the following teams:

Dewar, 19, named Silvertips captain for the 2018-19 season, was named the Silvertips Most Dedicated Player last season while serving as an alternate captain, one where he shattered career highs in points (68), assists (30) and goals (38), leading the Silvertips in goals while becoming the youngest player in Silvertips history to reach the 38-goal mark. In the postseason, he was second on the program in points (26) and goals (12) in all 22 games, leading the entire league in plus-minus (+24) and shots on goal (106). In 216 career WHL games, all with the Silvertips, Dewar has collected 63 goals and 116 points, along with a +19 rating.

He has been a part of two Silvertips teams that captured the U.S. Division title, and last season earned their second trip to the Rogers WHL Championship Series as Western Conference champions. Dewar was selected by Minnesota in the third round (92nd overall) of the 2018 NHL Draft.

Sutter, 18, completed his third season with the Silvertips notching career highs in goals (25), assists (28), points (53) and plus-minus (+22) in 68 games. He went 52.4 percent at the face-off circle (715 of 1,364) and his five game winning goals were tied for fourth on the Silvertips. A participant at the NHL Scouting Combine in Buffalo, the 6-foot-3, 205 pound forward skated in the CHL/NHL Top Prospects Game in Guelph, Ontario last season and has 96 points, 46 goals, and 50 assists in 166 career WHL games, all with the Silvertips. His +17 rating was tied for third in the WHL Playoffs and he earned 19 points (9g-10a) in 21 postseason games, also leading the Silvertips in playoff game winning goals (3).

Sutter had five multi point games in the playoffs and tied for the Silvertips lead in points (5) in the Rogers WHL Championship Series. During regular season play, he was one of four Silvertips to earn a hat trick and his career high five point game (4g-1a) on Dec. 27 included four goals, tying the franchise record for most goals in a game. He was selected by the Capitals in the third round (93rd overall) of the 2018 NHL Draft.

Wylie is the first Everett born player in history to be selected in the NHL Draft with development experience in Everett Youth Hockey, the Silvertips Elite program, and in the WHL as a Silvertip player. He was selected by the Flyers in the fifth round (127th overall) of the 2018 NHL Draft.

Wylie, 18, comes off career highs in points (31), goals (6), assists (25), and plus-minus (+12) while never missing a game last season, sharing the Silvertips Iron Man award and claiming the Silvertips Most Improved Player award for 2017-18. His eight points (2g-6a) in 22 playoff games were tied for 10th among WHL defenseman, while ranking among WHL defensemen in the postseason: fourth in shots (47), and tied for fourth in plus-minus (+12).

Christiansen, who turns 19 next Wednesday and will attend on a Flames camp invite, was co-recipient of the Silvertips Iron Man award last season when he earned a career high 31 points (6g-25a) and a +12 rating in all 72 games, additionally earning seven points (2g-5a) and a +6 rating in all 22 postseason games. The 6-foot-1, 194 pound defenseman skated with the Flames in development camp after the conclusion of last season, and has 58 points and a +29 rating in 192 career WHL games – all in a Silvertips jersey. He remains eligible for the 2019 NHL Draft.

Preseason tickets for Saturday, Sept. 15 at A.O.T.W. Arena, when the Silvertips host the Seattle Thunderbirds at 7:05 p.m. are available via general admission seating at http://everettsilvertips.com/preseason. Opening the Silvertips home schedule, which covers 34 games this season at Angel of the Winds Arena, is Opening Night against the Vancouver Giants on September 22 at 7:05 p.m. All fans will also witness the raising of the Silvertips sixth U.S. Division championship banner and second Western Conference championship banner to the rafters before the opening puck drop, and the first 5,000 fans at the doors will receive a collectible Silvertips magnet schedule, presented by Lamoureux Real Estate and Sound Transit. Season Tickets and Mini-Plan Packages are available at www.everettsilvertips.com/season. Opening night for the Tips 2018-19 season is Friday, Sept. 21 at Vancouver (7:35 p.m., 1380 AM / 95.3 FM KRKO).