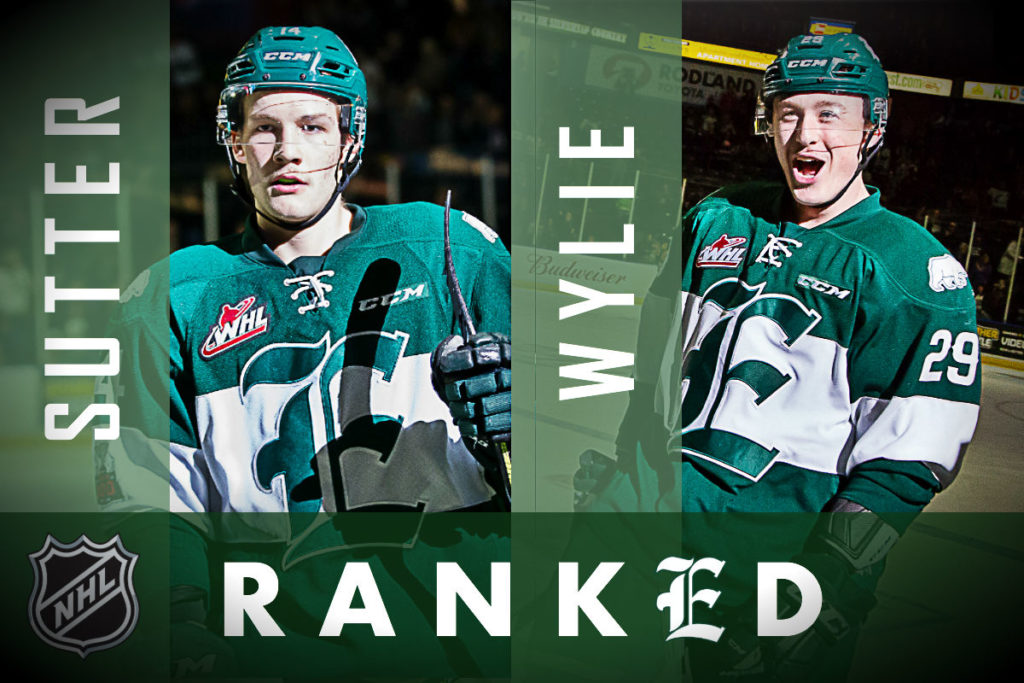 Both players, categorized as late 1999-born eligible skaters, are a total of 43 players from Western Hockey League team included in the rankings for skaters and goaltenders eligible for this summer’s NHL Entry Draft, scheduled for June 22-23 in Dallas.

Sutter, 18, will skate in the upcoming CHL/NHL Top Prospects Game this Thursday in Guelph, Ontario and has tied a career high in goals (20) along with posting 37 points and a +16 rating in 45 games. He has won 493 of 936 face-offs (52.6%) this season and his four game winning goals are tied for second and five first goals are tied for the lead on the Silvertips.

The 6-foot-3, 205 pound forward has 41 goals, 19 power play goals, a +20 rating and 80 points in 143 career WHL games, all with the Silveritps. His father, Ron skated 19 seasons as a forward and two-year captain in the National Hockey League with Philadelphia, St. Louis, Quebec, Boston, Phoenix, San Jose, Calgary and the New York Islanders. His Uncle, Darryl led the Los Angeles Kings to two Stanley Cup championships as head coach. Riley’s family includes ten former players who have suited up in the WHL.

Wylie, 18, is in his second season as a Silvertips defenseman with career highs already in points (22) and assists (19) along with three goals and a +10 rating in 48 games. The Everett native, first player to be drafted by and play for the Silvertips after suiting up in the Everett Youth Hockey program, was selected by the Silvertips in the sixth round (128th overall) in the 2014 WHL Draft and has 32 points and a pair of power play goals in 119 career WHL games.

At the 2017 NHL Draft, a total of 33 WHL players were selected, including seven in the first round.

UP NEXT: The Tips host the Seattle Thunderbirds, up next on Friday at 7:35 p.m. (1380 AM & 95.3 / Tips App / WHL Live) at Angel of the Winds Arena in downtown Everett, with doors opening at 6:00 pm Hockey Happy Hour (presented by BroadStroke Associates). Tickets are on sale at www.everettsilvertips.com/hhh.