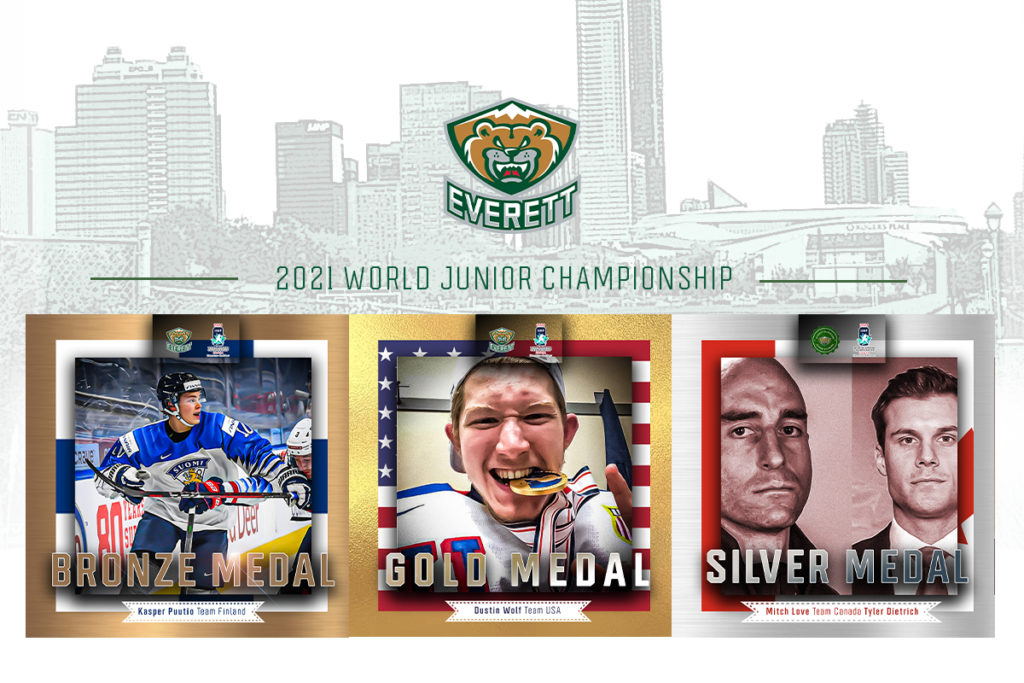 EVERETT, WA – Everett Silvertips goaltender Dustin Wolf earned a gold medal in Team USA’s victory, 2-0 over Canada at the 2021 IIHF World Junior Championship at Rogers Place in Edmonton, Alberta on Tuesday. The Silvertips were represented at each level of medalists in the event, with Silvertips alumni and assistant coaches Mitch Love and Tyler Dietrich each receiving a silver medal with Team Canada, and Silvertips defenseman Kasper Puutio earning a bronze medal with Team Finland after their victory over Russia.

Wolf, 19, appeared in two games in his second straight World Juniors appearance and didn’t allow a single goal on 21 shots faced, earning the United States’ first victory of round robin play over Austria on Dec. 26. He also entered mid-game on Christmas night against Russia and turned in 11 saves on 11 shots. 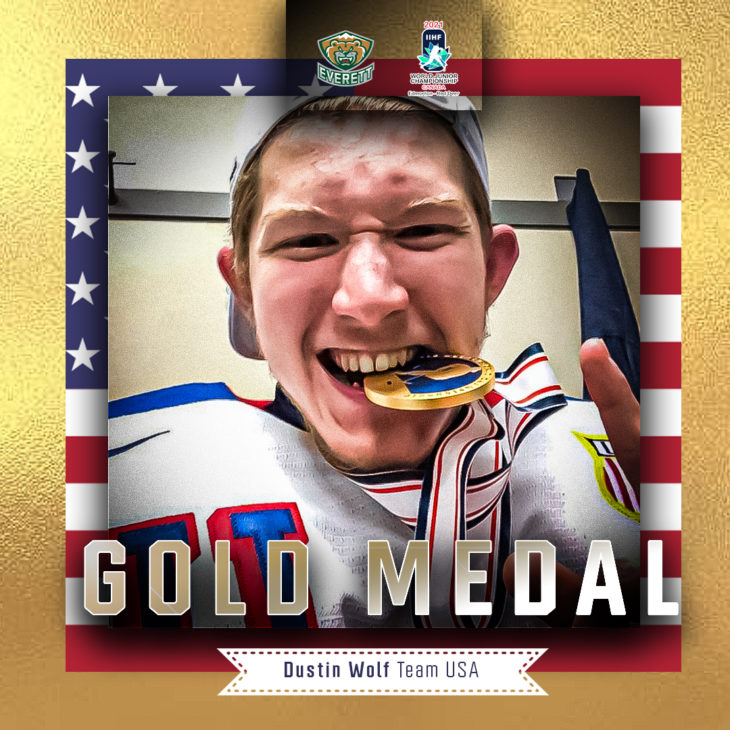 He will be a late arrival to Calgary Flames training camp after competing for Team USA, who earned their fifth all-time gold medal. The Gilroy, Calif. native will be entering his fourth season as Silvertips netminder and last season was named CHL Goaltender of the Year and recipient of the Del Wilson Trophy, leading all CHL goaltenders with a 1.88 goals-against-average, .935 save percentage, nine shutouts and posting a 34-10-2-0 record. He was selected by the Flames in the seventh round of the 2019 NHL Draft and is 88-31-4-2 with 20 shutouts and a .934 save percentage in 127 career WHL games, all with the Silvertips.

Puutio, 18, suited up in all seven Finland games in the tournament and added a pair of assists, 15 shots on net and averaging 14:20 of ice time per game. He notched two assists and was named Finland’s Player of the Game in a 4-3 defeat to Team USA in the Semifinals on Jan. 4. 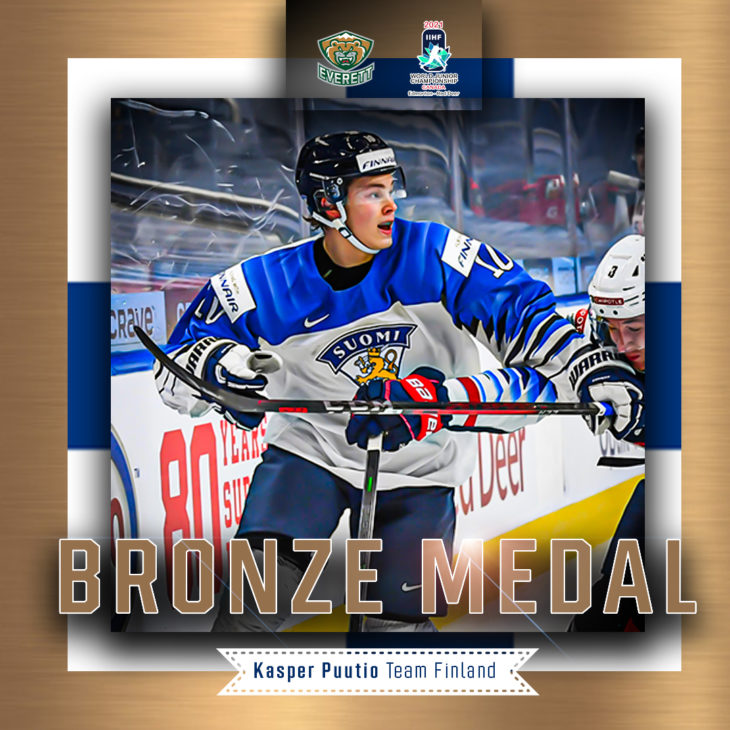 The native of Vaasa, Finland was selected by the Florida Panthers in the fifth round (153rd overall) of the 2020 NHL Entry Draft after registering 28 points (5g-23a) in 56 games with the Silvertips and Swift Current Broncos, his rookie WHL season. He earned 12 points in his first 21 games as a Silvertip after being acquired from Swift Current on Jan. 10 with forward Ethan Regnier in exchange for forward Martin Fasko-Rudas, defenseman Parker Hendren, and two WHL Draft selections. The first overall selection in the 2019 CHL Import Draft, Puutio skated in the CHL / NHL Top Prospects Game in 2019-20 and is currently on loan to Kärpät (Liiga) in Finland where he has a goal in eight games and has also suited up in a pair of games with their U20 program.

Love and Dietrich are in their second straight tournament serving on Hockey Canada’s staff and last season earned the gold medal in the 2020 tourney in the Czech Republic. Love’s Silvertips career spanned nine seasons either as assistant coach or player including two seasons as a Tips defenseman (2003-05). The Quesnel, British Columbia native was a member of the Silvertips inaugural squad in 2003-04 which won the U.S. Division and Western Conference championships. He served as the second captain in club history for the 2004-05 season. 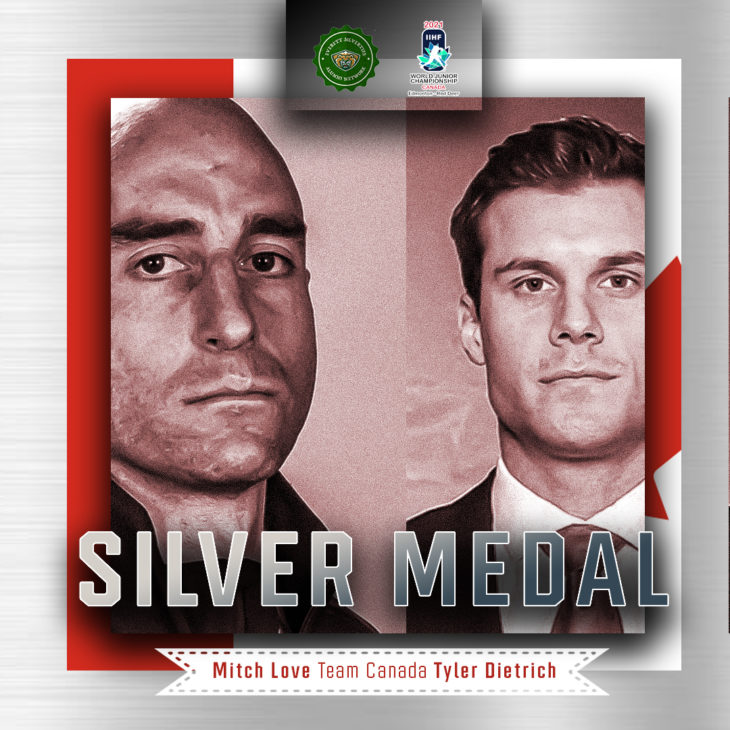 Dietrich has served Hockey Canada in four World Junior tournaments in a video or assistant coaching role and has spent five years with the program working numerous international events including the World Juniors, World Championships and Spengler Cup. Dietrich competed for two seasons (2003-05) as a Silvertips center, teaming with Love to help the Silvertips capture the Western Conference title in their 2003-04 expansion season and racking up 46 points in 72 Silvertips games along with four points in 10 WHL Playoff games.