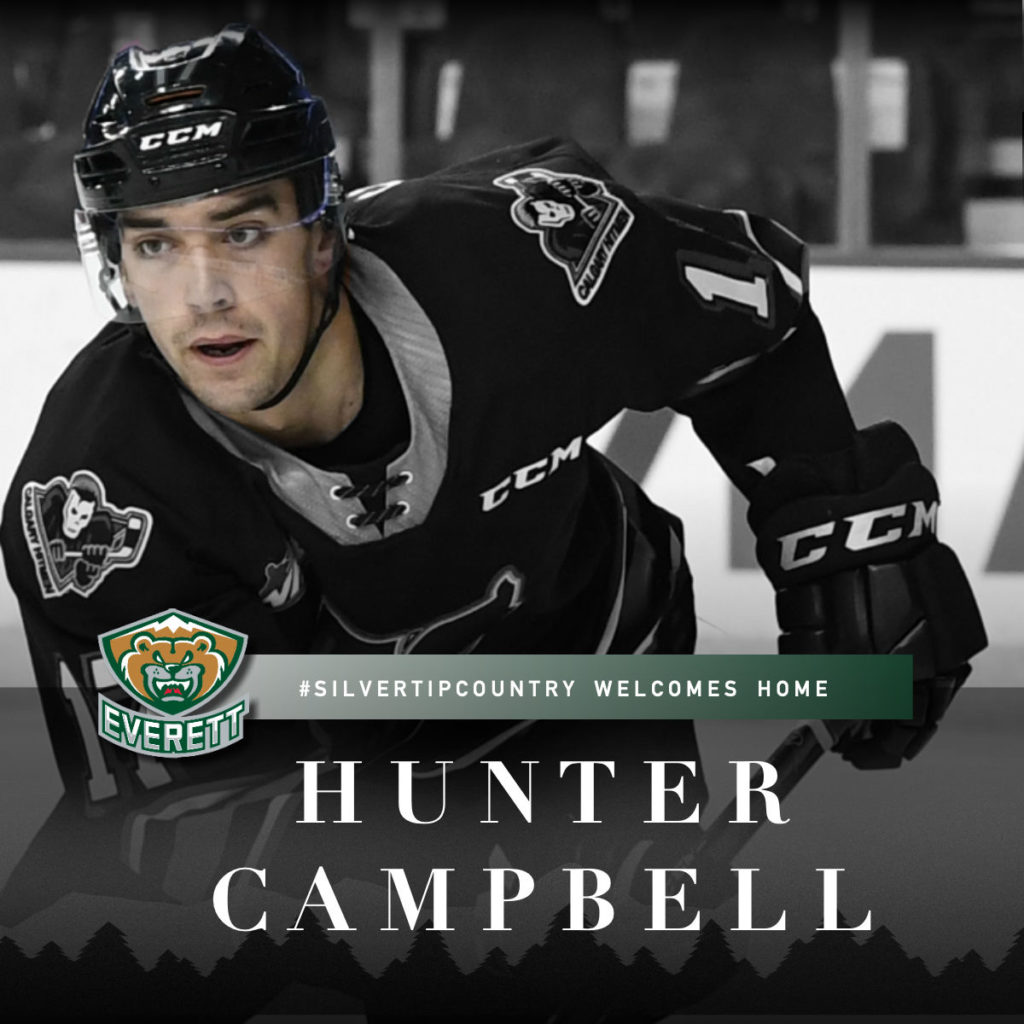 Silvertips Acquire Right Winger, Everett Native Hunter Campbell from the Calgary Hitmen in Exchange for Left Winger Conrad Mitchell and a Sixth Round Selection in the 2020 WHL Draft

Campbell, a 2001-born forward, native of Everett, Wash. and alumnus of the Everett Junior Silvertips program, is expected to be available to make his Silvertips debut on Saturday, Jan. 11 when the Tips return to play against the host Seattle Thunderbirds, 6:05 p.m. at accesso ShoWare Center. The Tips return home Sunday, Jan. 12 against the Regina Pats at 4:05 p.m. Tickets are on sale for the Jan. 12 home game, the next Siegen Family Fun Zone event. The first several hundred fans in attendance will take away a Tips beanie presented by BECU.

“Hunter Campbell – first and foremost – is a proven WHL forward with abilities and work ethic to supplement our depth into the stretch run of the season,” said Davidson. “It’s additionally exciting to add a forward whose heart and soul comes from the Puget Sound, a testimony to the growth of hockey in Everett and the surrounding region. As Turner Stevenson and the Junior Silvertips did a terrific job preparing him for the day-to-day commitments in the WHL, we’re ecstatic to welcome Hunter back home and look forward to his contributions in a Silvertips jersey.”

A product of Cascade High in Everett, he was selected by Calgary in the third round (60th overall) in the 2016 WHL Draft and suited up in 22 games as a Junior Silvertip (NAPHL 16U) in 2016-17, ranking second in points (27) and assists (15), and third in goals (12) while tying the club lead in playoff scoring with six points (1g-5a) in four games. Prior to last season, he suited up with USA Hockey in the program’s Select 17 Player Development Camp, logging five points in five games for Team White.

Campbell is re-united with 16U teammate Dawson Butt and is the fourth Silvertip on the roster originally from the state of Washington, joining Wyatte Wylie (Everett), Butt (Buckley), and Brendan Lee (Seattle).

Mitchell, a 2001-born forward and native of Thorsby, Alberta, has five points (4g-1a) in 29 games with 38 penalty minutes this season, and in his WHL career has amassed 10 points in 72 games while competing in a pair of WHL Playoff games last year after the Tips captured their third consecutive U.S. Division title. He was originally selected by the Silvertips in the seventh round of the 2016 WHL Draft.

“We made a difficult decision to include Conrad in the transaction, who has come a long way as a player and person in our program,” said Davidson. “He now has a place to play nearby his hometown. We thank him endlessly for his contributions and wish him nothing but the best moving forward. He’ll forever be considered a part of our family.”