TIPS WIN » All Rain, No Grain 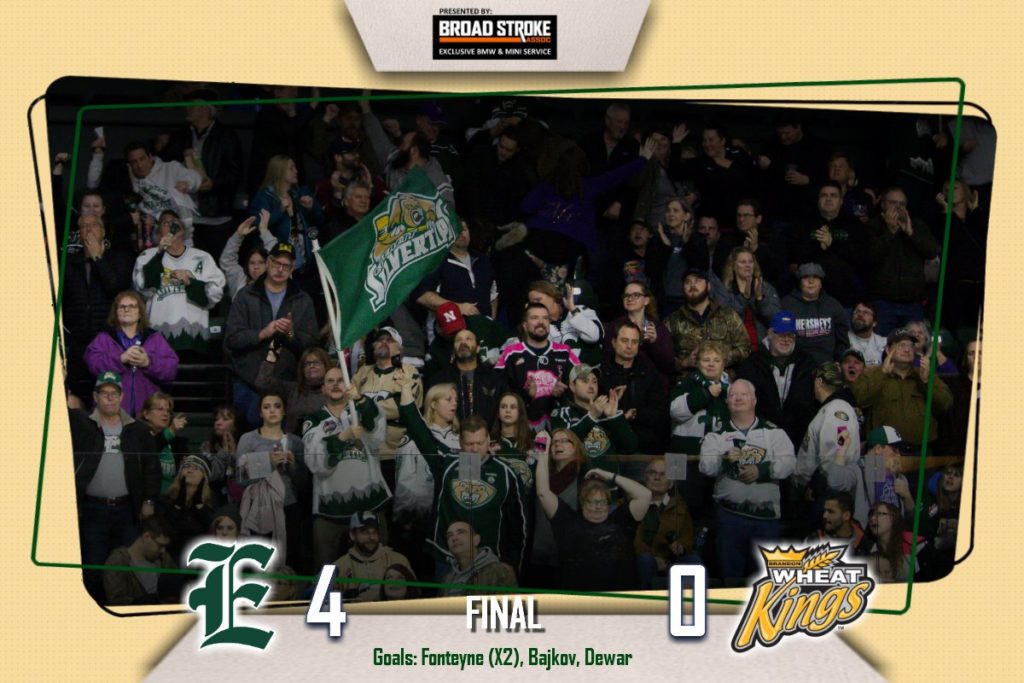 EVERETT, Wash. – Carter Hart earned the 25th shutout of his career to move within one of the Western Hockey League record, while Matt Fonteyne, Patrick Bajkov and Sean Richards combined for seven points in a 4-0 victory for the Everett Silvertips over the Brandon Wheat Kings, before 5,917 fans in downtown Everett on Saturday night in WHL action.

UP NEXT: The Tips host the Swift Current Broncos at 4:05 p.m. (1380 AM & 95.3 / Tips App / WHL Live) at Angel of the Winds Arena in downtown Everett, with doors opening at 3pm for a giveaway (Tips Trapper Hat presented by BECU). Tickets are on sale as low as $14 at www.everettsilvertips.com/tickets.

Fonteyne started his two goal effort with a highlight reel move on the rush and finish from behind the net off a Brandon defender in the crease, 16:16 into the first period for a 1-0 Tips lead.

Connor Dewar slammed in a rebound from the top of the crease at 7:54 of the third period for a 3-0 lead and Fonteyne followed by stashing his 27th goal at the left post with 6:19 to play for a 4-0 bulge.

Notes: Silvertips scratches included Gianni Fairbrother (injury, week to week), Akash Bains (injury, week-to-week), Luke Ormsby (healthy), Ian Walker (healthy) and Dawson Butt (healthy) … the Tips went are 14-of-29 in their most recent stretch on the power play … the Tips earned their first win at home vs. Brandon since the 2007-08 season and improved to 9-5-0-0 in the all-time series.
Silvertips season ticket or mini-plan packages are available at www.everettsilvertips.com/season or by calling (425) 252-5100.