TIPS WIN: Another Setup for Six 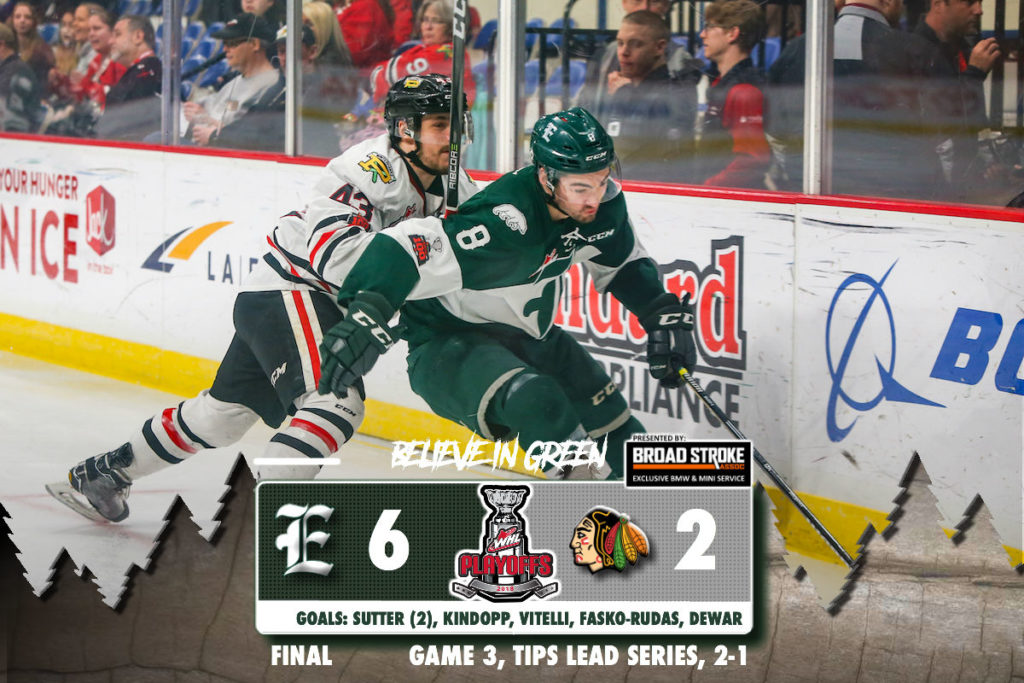 EVERETT, Wash. – Riley Sutter scored twice in a three goal first period, and Carter Hart made 40 saves to lift the Everett Silvertips to a 6-2 victory over the Portland Winterhawks in Game 3 of the second round of the WHL Playoffs before 4,453 fans at Veterans Memorial Coliseum on Tuesday. The Tips lead the best-of-seven series, 2-1.

Kevin Davis manufactured a pair of assists and was +3 from the blueline while 12 different Silvertips recorded a point in the game. The Silvertips improved to 3-0 on the road during the WHL Playoffs.

The Silvertips will aim for a 3-1 series lead on Thursday at Moda Center, when they visit the Portland Winterhawks at 7:00 p.m. (Fox Sports 1380 / WHL Live) for Game 4. Tickets for Game 5 on Friday are still available at http://everettsilvertips.com/playoffs.

Sutter snuck a wrister through Cole Kehler’s five hole at 4:35 of the first period for a 1-0 lead, followed by Bryce Kindopp and his one timer at the left post at 7:43 which was set up by Gianni Fairbrother, weaving his way through traffic.

Sutter then delivered a crushing hit with eight minutes elapsed and Sean Richards scrapped with Alex Overhardt at 8:51, but just 20 seconds after the fight, Sutter deflected Kevin Davis’ right point slapper for a 3-0 lead.

Dennis Cholowski converted a wraparound attempt at 15:35 for a 3-1 deficit, which the Tips kept contstant after one period. Kieffer Bellows followed a highlight reel save by Carter with a one-timer goal, under the crossbar, at 14:11 of the second period to cut the deficit to 3-2.

Just 38 seconds later, the Silvertips crashed the net and Reece Vitelli banged in Davis right side shot again for a 4-2 cushion.

At 7:06 of the third period, Matt Fonteyne and Bryce Kindopp manufactured a quick swing to the net and Fasko-Rudas buried a one timer for a 5-2 lead. With Cole Kehler pulled for an extra attacker, Hart gunned for the empty net from his trapezoid but missed wide. Moments later, Connor Dewar’s third of the postseason sealed the game with 2:05 to play.

Kehler made 22 saves to take the loss.