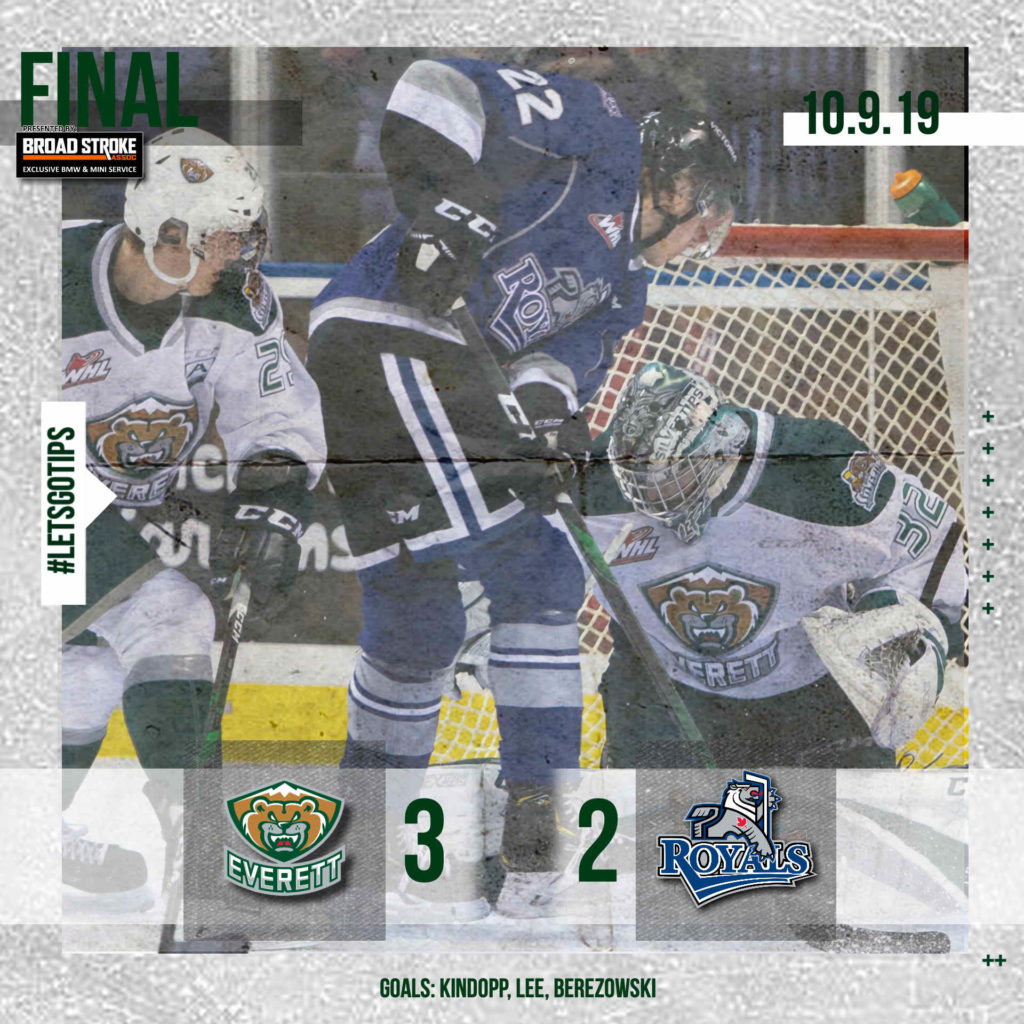 VICTORIA, British Columbia – Jackson Berezowski snapped a tie game with 4:09 left for his third goal of the season to lift the Everett Silvertips to a 3-2 victory over the host Victoria Royals before 3,687 fans on Wednesday at Save-On-Foods Memorial Centre in WHL action.

The Silvertips pushed their win streak to three consecutive games and finished a four game trip at 3-1-0-0, ascending to a tie for first place in the U.S. Division with the Portland Winterhawks. Bryce Kindopp earned his league leading eighth goal of the season and the 42nd multi point game of his career, while Dustin Wolf turned in a 31 save effort for the win.

Victoria got on the board first with Tarun Fizer’s power play goal from the left circle, 2:34 into the game and Wolf was huge in keeping Victoria’s advances away from the net to increase the lead, on another save on Fizer in the middle of the period. Kindopp then tied the game on a five-on-three goal, 1:36 left when he corralled Wyatte Wylie’s pass at the base of the left circle and unleashed a snap shot past Shane Farkas.

Brendan Lee buried his second goal in as many games, off the rush for a 2-1 edge at 2:10 when he cruised to the left circle and uncorked a snap shot over Farkas’ glove. Victoria’s Logan Doust buried a rebound on a power play to tie the game, with 3:35 left in the second but the Silvertips continued to work pucks to the Victoria net, seeking the go-ahead goal.

Berezowski gave the Tips the lead with 4:09 left in regulation when Michal Gut, stationed behind the net, put a pass to Berezowski’s tape for a re-direction at the left post.

Wolf and the Tips turned away Victoria’s pressure in the final minute, on a six-on-four situation and Wolf turned in his final save on a drive from Jacob Herauf and subsequent scrum for the loose puck.

Farkas turned in 38 saves for the loss.

NOTES: Scratched from the lineup were Braden Holt, Martin Fasko-Rudas, Conrad Mitchell, Gage Goncalves, and Jack Lambert … the Tips improved to 2-0-0-0 this season against Victoria and 16-8-1-2 when visiting the Royals … Wylie has points in five of his first six games … Kindopp’s two-point effort put him alone into 13th, all time on the Tips points list, surpassing Riley Sutter and Peter Mueller.

UP NEXT: The Tips return home on Friday, Oct. 11 for a 7:35 p.m. match-up with the Blazers at Angel of the Winds Arena. Saturday’s game at home is Pink The Rink, 7:05pm against the Seattle Thunderbirds at Ange of the Winds Arena.