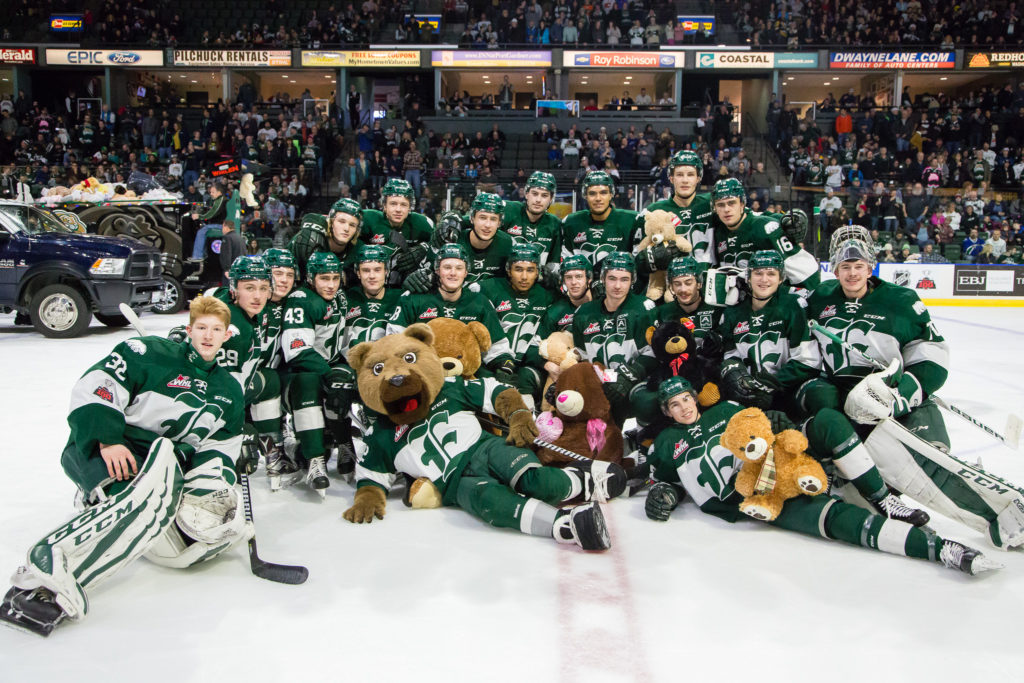 EVERETT, Wash. – Sean Richards broke a 1-1 tie with 3:30 left in regulation and goaltender Carter Hart, fresh off his WHL Goaltender of the Month award, stopped 32 shots to help lift the Everett Silvertips to a 3-1 victory over the Kamloops Blazers before 3,621 fans at Sandman Centre on Friday in WHL action.

The Silveritps won for the 10th time in the 15 games and boosted their win streak to a season high four games, backed by a 1-0 lead in the first period on Matt Fonteyne’s goal. Richards scored his 8th goal in the last 11 games, and the Tips moved to within a point of second place Spokane in the U.S. Division.

Fonteyne finished a Patrick Bajkov feed at the Kamloops net on a power play, glove side on Dylan Ferguson, 6:25 into the opening period with Kamloops native Kevin Davis, appearing in his final regular season game with the Tips in Kamloops, collecting an assist as he whipped a beautiful cross-ice pass from the right side to set up the play.

Hart closed out Kamloops for the first period on eight shots, and turned away 12 more in the second period with the Tips withstanding a 12-4 shot disparity to stay ahead by one.

The Blazers threatened again in the third, as part of a 13-shot buid-up and finally broke through on Nolan Kneen’s second goal of the year with 6:10 to play, sneaking a sharp angled slap shot into the upper corner. But Richards restored the Tips lead off the rush when he parked a rebound on Patrick Bajkov’s snapper from the left circle with 3:30 remaining.

The Tips sealed the game on Connor Dewar’s empty netter with 44 seconds left in regulation.

Ferguson, who made his NHL debut earlier this season with the Vegas Golden Knights, stopped 20 shots in the loss.

Notes: Silvertips scratches included Brandson Hein (healthy) and Kyle Walker (healthy) the Tips own a 9-0-1-0 in the last 10 meetings in Kamloops and won both games this season at Sanman Centre… Dewar returned to the lineup after missing due to injury and planted five shots on goal… the Tips power play, going 3-of-7 last game, went 1-of-4 tonight against the Blazers.