TIPS WIN // Chewing Up The Weekend 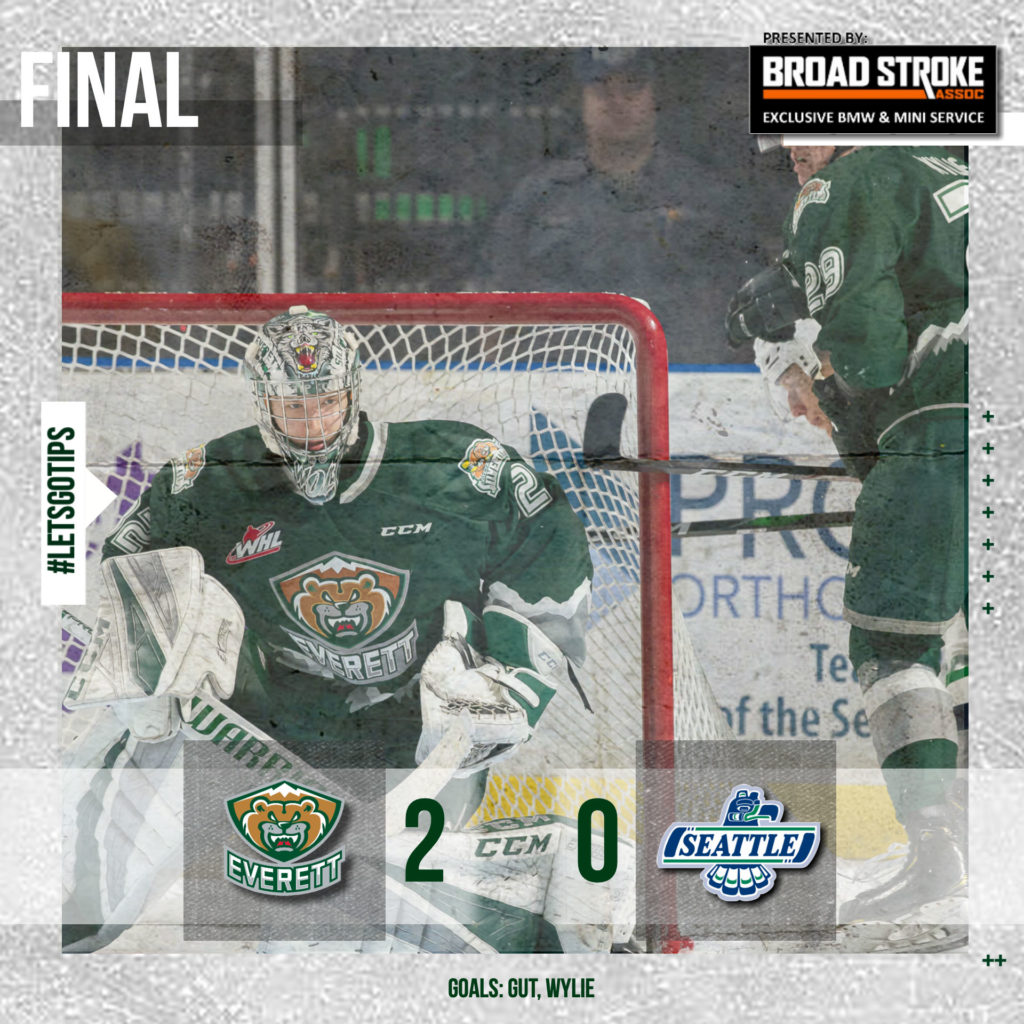 EVERETT, Wash. – Dustin Wolf made 29 saves for his seventh shutout of the year and 19th of his WHL career, and Michal Gut’s penalty shot goal broke a scoreless tie in the third period en route to a 2-0 victory for the Everett Silvertips over the Seattle Thunderbirds, before 4,579 at accesso ShoWare Center on Sunday in WHL action.

The Silvertips finished a three-game weekend with all six points and improved to 4-2 in the head to head series over Seattle, outscoring the Thunderbirds 10-0 in back to back wins on Saturday and Sunday. Wyatte Wylie added an insurance power play goal late in the third period.

Wolf’s shutout streak, extended to 132:56, was the 18th of his career, moving into a tie for 9th all time in the WHL with Taylor Dakers (Kootenay) and Matt Keetley (Medicine Hat) and seven behind the league record (26), shared by Carter Hart and Tyson Sexsmith.

UP NEXT: The Silvertips continue their three-game trip Wednesday at 7:05 p.m. at Spokane (KRKO / Tips App / WHL Live). The Silvertips return home Sunday, Jan. 26 against the Spokane Chiefs at 4:05 p.m. for Hat Giveaway presented by Buzz Inn Steakhouse.

The second period was an evenly matched twenty minutes as well. Both teams had twelve shots on net but Dustin Wolf and Roddy Ross refused to let anything past. In quite the contrast to Saturday’s game, neither team could find the net as we were heading for fantastic final period of hockey.

Trying to find a "Gut" emoji to describe this goal. What would you use?🤔#LetsGoTips pic.twitter.com/K0cvUVm5JE

In the last twenty minutes, the action started to pick up for the Silvertips. At 7:26, Michal Gut would score on the penalty shot with a magnificent backhanded deke and give Everett their first lead of the hockey game.

Less than eight minutes later, Wyatte Wylie sniped a shot off the rush past Roddy Ross on the power play to give Everett insurance as they had a 2-0 lead with under five minutes to go. Dustin Wolf was a brick wall and shut the T-Birds out once again as Everett won their third straight game.

NOTES: Scratched from tonight’s game was Dawson Butt, Dylan Anderson, Gianni Fairbrother, and Tyson Phare… Michal Gut now has points in his last four games, including a goal scored in two of his last three games … Cole Fonstad extended his point streak to 10 straight games, longest this season by a Silvertip … Gut converted on the 25th penalty shot in Silvertips history, the second successful one this season by the Tips (Bryce Kindopp vs. Spokane in overtime).