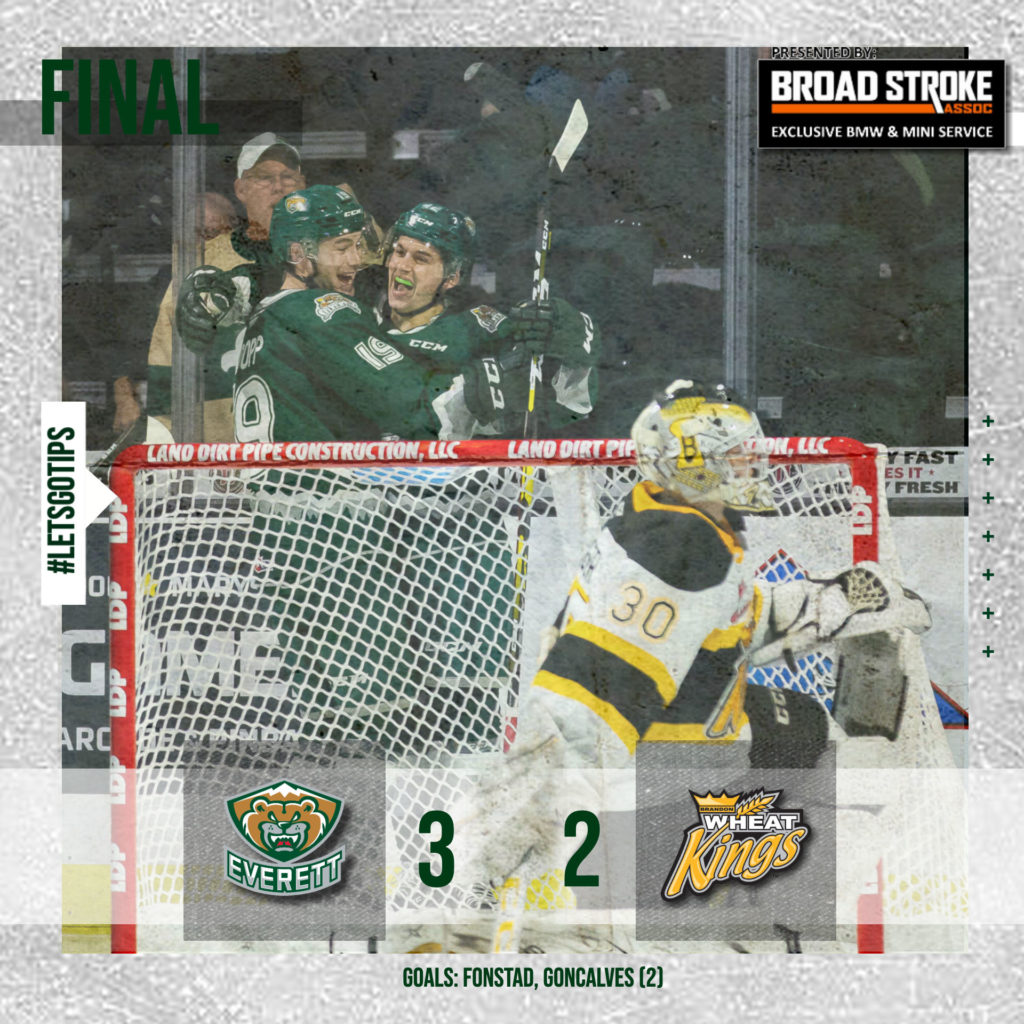 EVERETT, Wash. – Cole Fonstad tallied a goal and two assists in his debut and the Everett Silvertips erased a two-goal deficit to rally and defeat the Brandon Wheat Kings, 3-2 before a crowd of 3,047 in downtown Everett on Wednesday in WHL action.

Fonstad, making his Silvertips debut after being acquired Sunday in a trade with Prince Albert, now has nine points in his last three games and helped facilitate an eventual winner by Gage Goncalves, burying his second goal of the game with 15:25 left in regulation.

Keegan Karki earned the win with 27 saves in net.

UP NEXT: The Tips resume the homestand on Friday, Oct. 18 at 7:35 p.m. (KKXA / WHL Live) against the Tri-City Americans at Angel of the Winds Arena. Tickets are on sale at the link below with doors opening at 6:00 p.m., extra early for Hockey Happy Hour presented by Broad Stroke Associates. Ticket packages (including a beverage voucher) are available as low as $25.

The Tips opened period one with several high grade opportunities but failed to capitalize, outshooting Brandon, 18-9. Cole Reinhardt’s backhander off the rush put the Wheat Kings up 1-0 at 10:53.

Fonstad nearly missed on a one-timer in the second period and then was stopped on a partial breakaway as Ethan Kruger turned away 15 Tips shots in period two. The Wheat Kings took advantage and went up 2-0 on Jonny Lambos’ drive from the point for his first career WHL goal at 17:34.

Brandon sunk into penalty issues and already down a man, took another penalty at the second period horn when Dominic Schmiemann was called for roughing, giving the Tips a two-man advantage early in the third period.

The Tips power play took advantage, scoring on back-to-back opportunities. Fonstad drilled a rebound from the right circle for his third goal of the season, and first as a Silvertip, on the five-on-three to cut the Brandon lead to 2-1 just 14 seconds into the period. On the next power play, Bryce Kindopp set up Gage Goncalves for a one-timer between the circles and the Tips tied the game, 2-2 at 1:17.

Fonstad then helped facilitate the go-ahead goal just over five minutes into the third. Stationed at the right boards, he whipped a cross-ice pass to the tape of Olen Zellweger, set up inside the left blueline. Zellweger fired a bullet to the net that caught the pads of Kruger, and Goncalves calmly tucked the rebound for his second goal and a 3-2 lead at 5:35.

Keegan Karki turned in a big save on Connor Gutenberg with a minute left then stopped Braden Schneider’s wrap-around on the next shift. Brandon pressed for the game tying goal but the Tips collapsed sufficiently to turn away Gutenberg’s last second attempt, securing the victory.

Kruger turned in 39 saves with the loss.

NOTES: Scratched from the lineup were Braden Holt, Martin Fasko-Rudas, Jack Lambert, Aiden Sutter, and Conrad Mitchell … the Tips have won back to back meetings with Brandon, set in downtown Everett (Tips are now 10-6-0-1 lifetime against the Wheat Kings) … the Tips 42 shots in the game set a season high … Fonstad’s goal set a new mark for quickest goal to begin a period this season.