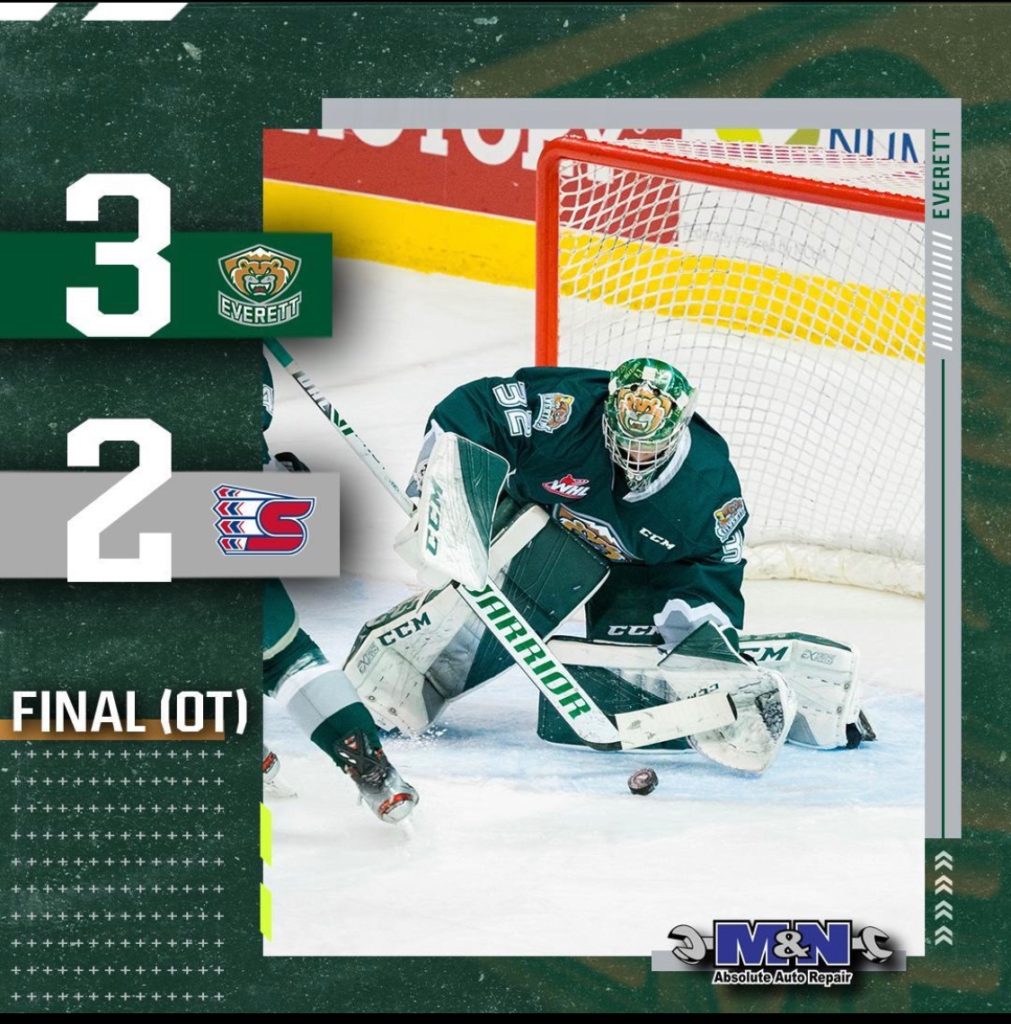 EVERETT, Wash. – Cole Fonstad drove the net for his second goal of the game at the 3:06 mark for a three point effort, helping the Everett Silvertips finish the Spokane Chiefs in a 3-2 overtime victory on Sunday in WHL action at Spokane Arena.

Already locking up the U.S. Division title last night, the Silvertips returned to play by sealing up their eighth win in the last 11 games and second in overtime this season. Fonstad, an NHL free agent, sealed up the 72nd multi point game of his career and fifth goal in the last five games. Jackson Berezowski scored a second period power play goal while Dustin Wolf made 30 saves for the win.

UP NEXT: The Tips return home for the final homestand of the season starting Wednesday, 7:05 p.m. (KRKO/WHL Live) against the Seattle Thunderbirds. Viewing packages remain on sale at watch.chl.ca. Play-by-play “Voice of the Tips” Mike Benton will have pre-game coverage beginning 30 minutes before puck drop.

Just like Friday night, but this time en route to a win, the Tips built a 2-0 lead after the first 20-plus minutes. Fonstad’s shot that snuck through the blueline, off a face-off win, put the Tips on the board at 6:28 of the first period and then Berezowski finished a power play one-timer at the net just 30 seconds into the second period, set up by Fonstad’s bump from the right corner.

Spokane countered with back-to-back power play goals from Blake Swetlikoff to erase the deficit by the end of the period, first on Swetlikoff’s rebound at the left post at 2:12 for a one-goal deficit.

Swetlikoff then set a screen at the net and got a piece of Matt LeDuc’s point shot with 57.7 seconds left in the second period.

A tightened third period yielded only an 8-5 shots advantage for Spokane, as the two teams played into overtime with the extra point on the line. Dustin Wolf calmly turned away a backdoor feed to Luke Toporowski, who crashed the net, setting up Fonstad’s heroics about a minute later.

With the Silvertips re-grouping at center ice, Fonstad generated a burst of speed at the left wing, drove the net, and slipped a backhander around Mason Beaupit’s glove side which sent the Silvertips bench into pandemonium, spilling onto the ice to celebrate.

GAME NOTES: Silvertips scratches included U18 departures Braden Holt and Olen Zellweger, while Jalen Price, Brady Van Herk and Brendan Lee were healthy scratches … Fonstad extended his point streak to 12 consecutive games … the Tips went 3-0 in three visits to Spokane this season and improved to 4-1 in the six-game series.