TIPS WIN » Dustin’ Off the First One 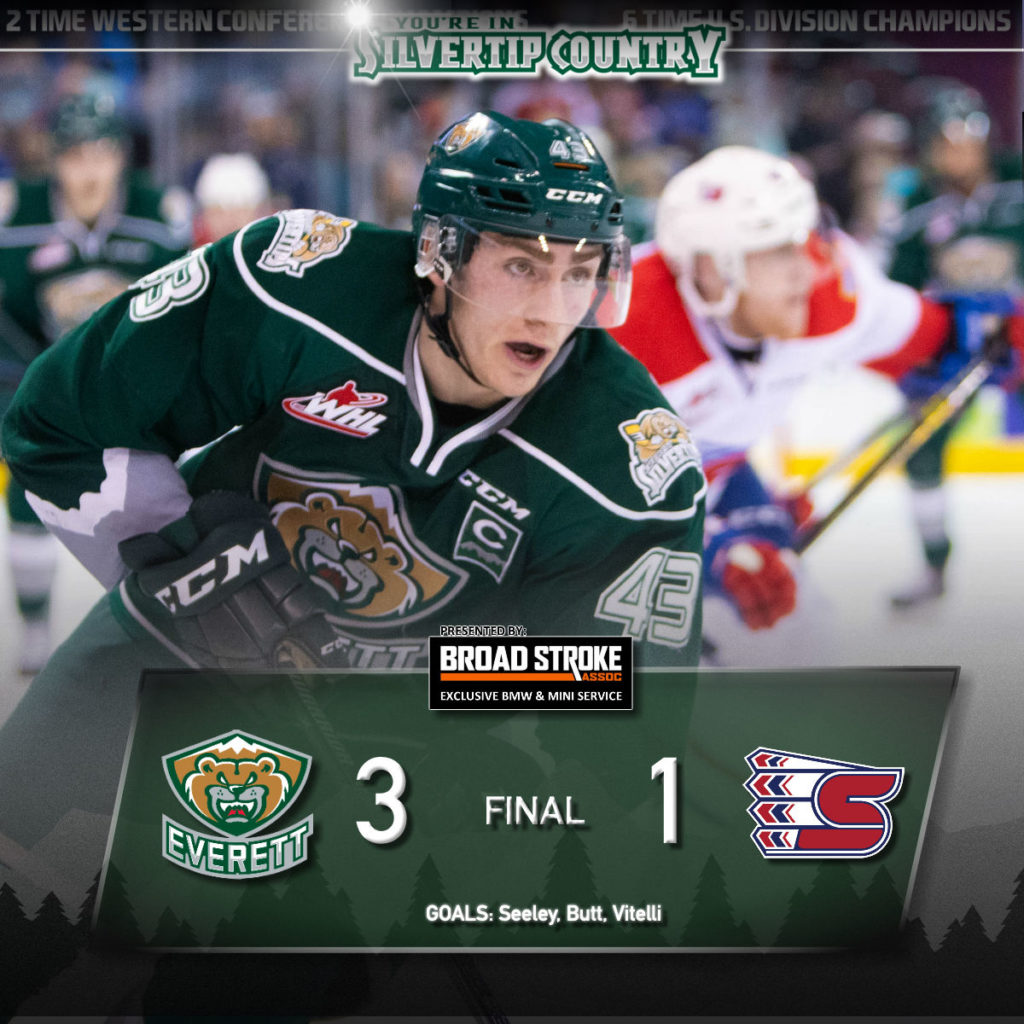 SPOKANE, Wash. –  A five game road trip opened up with the Everett Silvertips rallying from a one goal deficit in the second intermission, scoring three unanswered goals for a 3-1 victory over the Spokane Chiefs before 3,740 fans on Tuesday in WHL action at Spokane Arena.

Already with the U.S. Division title in hand, the Tips claimed sole possession of first place in the Western Conference over idle Vancouver with their 22nd road victory, most in the conference. Ronan Seeley scored his first career goal, Dawson Butt netted the eventual winner, and Reece Vitelli landed a key insurance goal help put the game away late, backstopped by Dustin Wolf’s 24 saves.

UP NEXT: The Tips continue the five game road stretch with a Friday matchup in Kennewick against the host Tri-City Americans at 7:05 p.m. (KRKO / WHL Live / Amazon Alexa), at Toyota Center. The Tips will return home for Fan Appreciation Night on Mar. 16 vs. Victoria at 7:05pm. Tickets are on sale, along with WHL Playoff packs, at www.everettsilvertips.com/tickets.

Spokane funneled six shots on net in the first seven minutes, but Wolf kept the game scoreless which included a wide open look on Adam Beckman from the left circle.

The Chiefs then capitalized on back-to-back Tips penalties in the second period and Jaret Anderson-Dolan buried a snap shot from the left circle for a two-man advantage goal with 11:20 left for a 1-0 lead. Minutes later, Wolf turned in another point blank stop on Luke Toporowski to keep the Tips within reach.

Held to just 12 shots in the first two periods, the Tips wasted no time in generating offense in the third period, dumping 15 shots on Bailey Brkin. They tied the game on Seeley’s first career WHL goal just 1:38 into the period on a blast from off the left point that sizzled through traffic.

Just 1:55 later, Wyatte Wylie whipped a pass from the right boards and found Dawson Butt stationed at the Spokane net, who successfully deflected the puck past Brkin for a 2-1 lead and his 8th goal of the year.

Vitelli put the game away by pouncing on a turnover, skating in alone on Brkin, and finishing a forehand deke with 3:57 left in regulation for a two goal cushion.

Brkin took the loss with 24 stops.

NOTES: Silvertips scratches included Martin Fasko-Rudas, Riley Sutter and Jalen Price… the Silvertips are 23-7-2-1 against U.S. Division opponents … the Tips finished the season series with a 6-0-1-1 record against Spokane … Vitelli became the 11th player this season on the Tips roster to reach double digits in goals … Zack Andrusiak led the Tips with five shots on net.