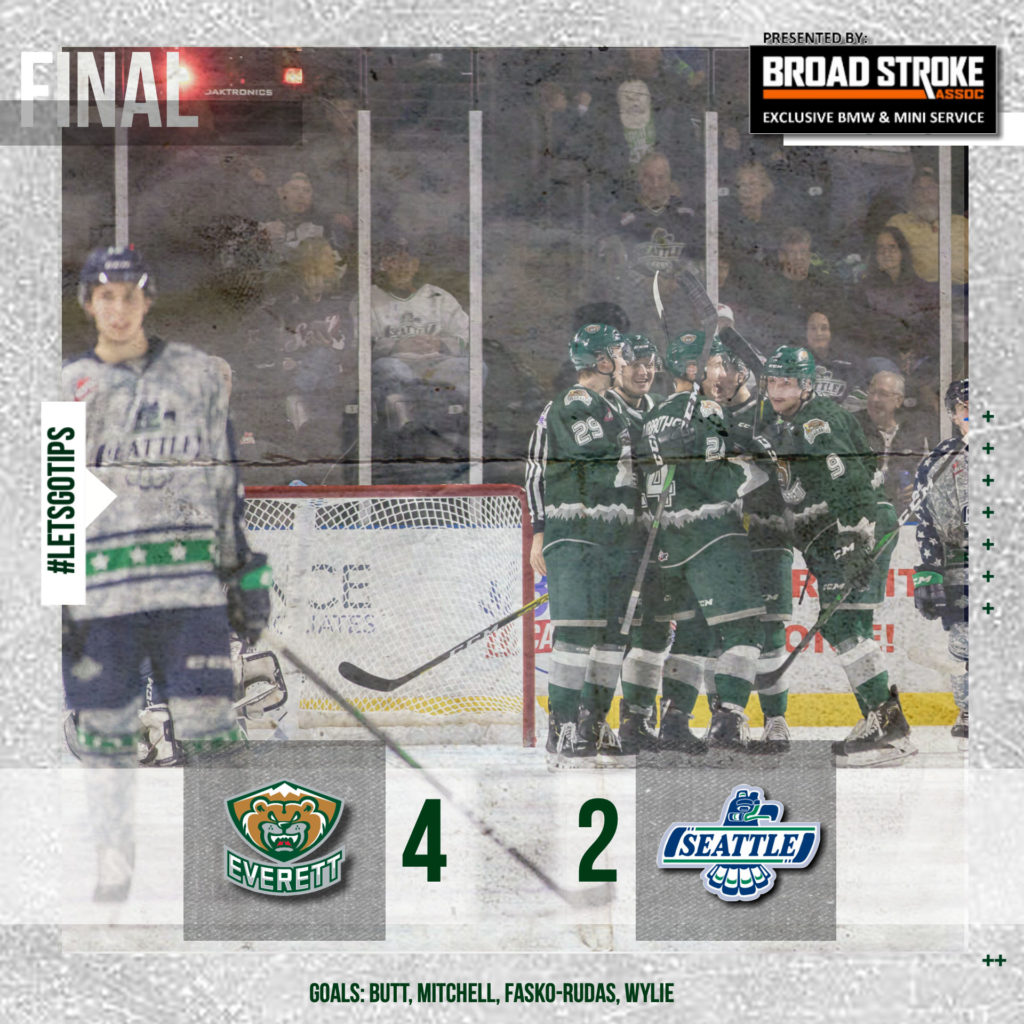 KENT, Wash. – Keegan Karki turned in 36 saves while Martin Fasko-Rudas’ power play goal and assist helped boost the Everett Silvertips to a 4-2 victory over the Seattle Thunderbirds before 5,504 fans on Saturday in WHL action at accesso ShoWare Center.

In a physical and eventually hostile matchup that turned in 120 penalty minutes, mostly in the third period, the Tips moved to within one win of tying their franchise record for longest win streak. Dawson Butt scored his second goal of the season just 32 seconds into the first period, while Conrad Mitchell and Wyatte Wylie also tacked on the goal scoring.

UP NEXT: The Tips will rest for the next six days and return to play on Saturday, Nov. 16 against the Winnipeg ICE, 7:05 p.m. in downtown Everett to open a three-game homestand at Angel of the Winds Arena. Tickets remain on sale, including the Chick-fil-A Fan 4 Pack, offering 4 tickets and sandwiches for as low as $56.

Keegan Karki and Roddy Ross traded saves through the first period in a scoreless tie, and the Tips outshot Seattle 14-13. Just 32 seconds into the second period, Dawson Butt jumped on a loose puck between the circles and hammered a slap shot past Ross for a 1-0 edge.

Mitchell’s second goal in two straight days put the Tips up 2-0 at 6:50 when he cruised to the left circle, receiving Michal Gut’s feed and fired a rocket under the crossbar.

Martin Fasko-Rudas helped the Tips move ahead 3-0 with 10:28 left in regulation, a power play goal when he jammed a loose puck under Ross after Cole Fonstad fed Fasko-Rudas at the front of the net.

Tyrel Bauer’s slap shot put Seattle on the board with 8:49 left in regulation, ending a shutout streak by the Silvertips against Seattle of 115:53, dating back to last season.

Seattle pulled Ross for a sixth attacker but Wylie’s clear from the Silvertips zone found the empty net, 150 feet away, for a 4-1 edge with 2:42 to play.

Matthew Rempe’s first career WHL goal was the final tally for Seattle with 1:37, before several altercations erupted in the last 90 seconds. The two teams combined for 11 penalties and four fighting majors: Wyatte Wylie dropped the gloves with Simon Kubicek after Matthew Wedman’s charging penalty (5 minutes) for a hit on Gianni Fairbrother with 25 seconds left. Aidan Sutter then fought Andrej Kukuca with 22 seconds left in the game.